And the Rains Came

Since my arrival here in Mexico City on April 9th, I have not seen a drop of rain.  There have been some parts of the city that have received a little precipitation, but nothing at the condo I rent, at Alejandro's home, or the various places in the city where I have wandered.  But that is not surprising.  This is the dry season, and on an average the month of April sees less than an inch of rainfall.  The rainy season does not begin in earnest until June.

Since Saturday I have been at Alejandro's house.  Yesterday at about 6:00 P.M. we had a very noisy thunderstorm with about a half hour of rain.  The rain, which was not in the forecast, should clear out the air pollution for a little while and green up the parched vegetation. 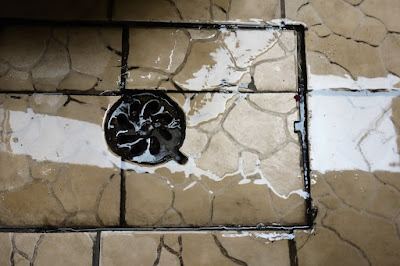 Taking this picture of the pavement of the courtyard at Alejandro's home,
with the rainwater flowing to the drain, and the sky reflected in the water,
I was reminded of the opening scene of the film "Roma".
If you have seen the movie, you know what I mean.
All that is missing is the image of an airplane passing overhead
and reflected in the water.