Strolling through the Park

After our visit to "Los Pinos" on Saturday Alejandro and I decided to walk through Chapultepec Park rather than head back to the condo on the subway.

Just outside of the complex of "Los Pinos" are the remains of a colonial aqueduct built in the 16th century. 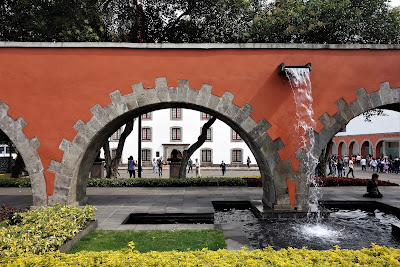 Near the aqueduct once stood an old mill called "Molino del Rey" (the King's Mill).  Here in 1847 one of the last battles of the Mexican American War was fought.  The Mexican forces tried to repel the U.S. Army as it made its way toward Mexico City.  (At that time Chapultepec Park was several miles from the city.)  It was one of the bloodiest battles of the war with heavy casualties on both sides.   After around seven hours of fighting, the Americans took the mill.  They marched on to fight another battle at Chapultepec Castle, and within a week they had taken Mexico City. 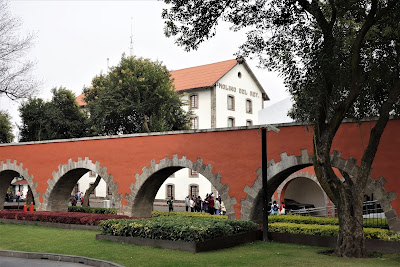 The white building which stands on the site of the mill is now a military barracks. 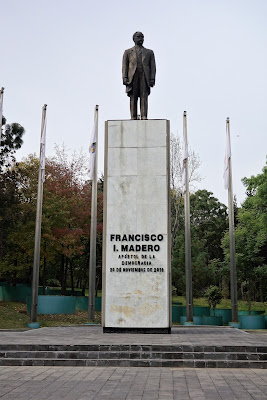 Nearby is a monument to Francisco Madero, a hero of the Mexican Revolution of 1910.
He was elected President after the dictator Porfirio Diaz was forced into exile.
In 1913 Madero was assassinated in a counter-revolutionary coup. 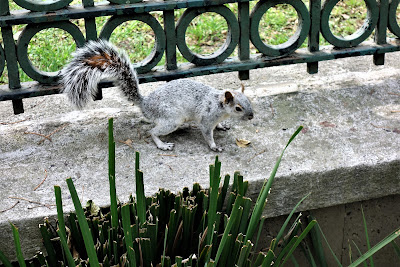 One of the park's residents 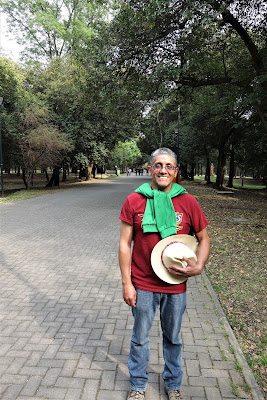 The route we took through the park was along one of the less frequented paths.
Even though it was a Saturday when the park is crowded, our walk was tranquil. 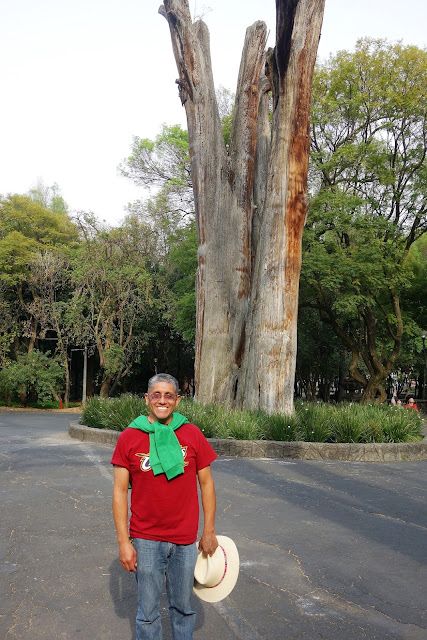 Alejandro poses in front of the remains of "El Sargento", a cypress tree which dates back to Aztec times.  It lived for around 500 years before dying in 1969.

After our walk we had dinner at a restaurant just outside of the park called "Mirador de Chapultepec".  We have eaten there a couple times before, and although by Mexican standards it is rather expensive, the food is good.  We had a pitcher of "clericot" (a wine beverage similar to sangria), soup, main course, and a shared dessert.  The bill came to $66 US for the two of us. 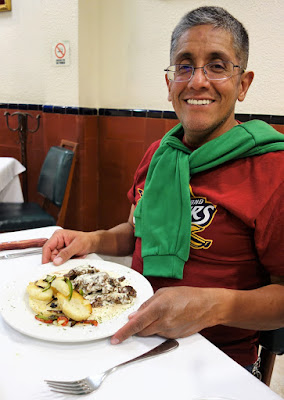 Alejandro had beef medallions in a three cheese sauce with jalapeños. 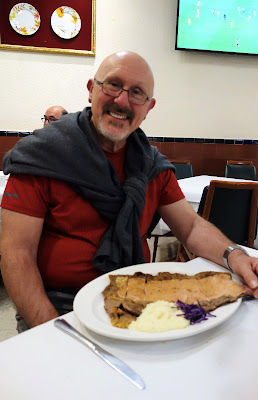 I had what is called a "milanesa", beef filet pounded into a thin sheet and breaded.
It was topped with ham and Manchego cheese.

When we left the restaurant it was such a pleasant early evening that we walked the remaining two miles to the condo... and burned off a few of the calories.
Posted by Retired Teacher at 8:58:00 AM