It was a beautiful afternoon on Sunday.  Alejandro and I decided to take a walk with no particular destination in mind.

We headed first to the public park in my neighborhood of Colonia Nápoles.  We had never been there on a Sunday, and we were surprised that they have an organic food market each weekend. 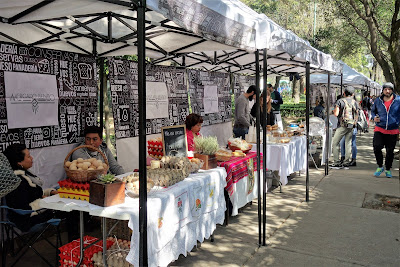 We then passed by one end of the Sunday "tianguis" (outdoor market) which stretches for several blocks along one of the streets in Nápoles. 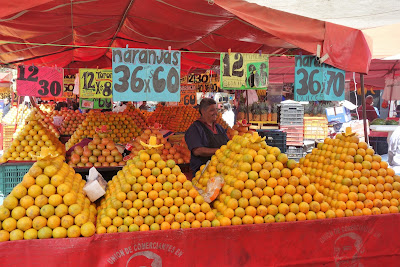 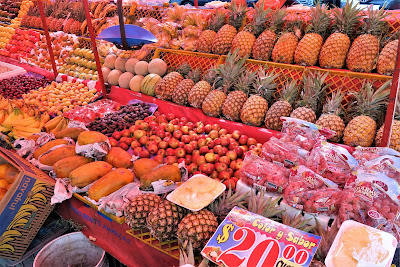 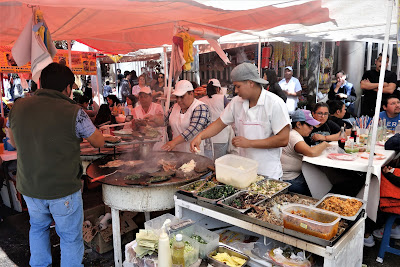 We crossed over into the next neighborhood, San Pedro de los Pinos.  For some time I have been watching the construction of this high-rise building, and it appears that is nearing completion.  Its architecture is quite interesting, and the X shaped beams are supposed to be a technique to help the structure withstand earthquakes. 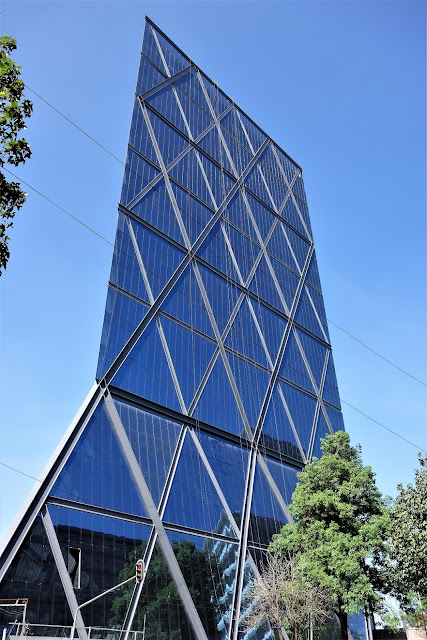 Right across the street is the Metropolí Shopping Mall.  We went inside because Alejandro wanted to see what was playing at the movie theater.  There was nothing of interest to us, so we moved on. 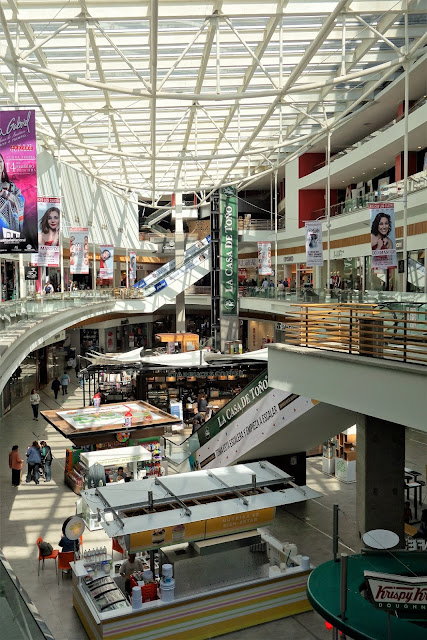 I stopped in my tracks, however, and I had to take a picture when I saw that a Borders Bookstore still exists in Mexico. 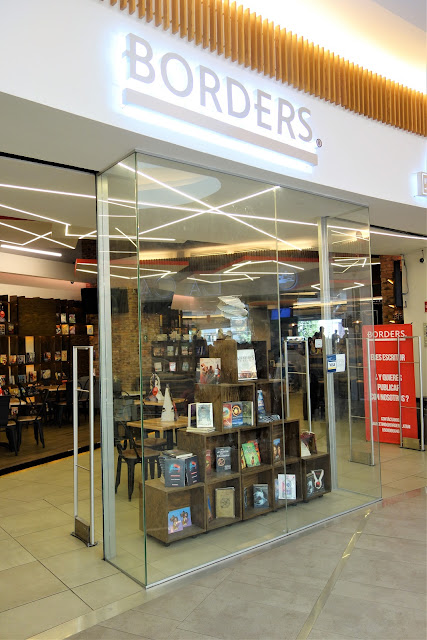 Like the old stores in the U.S., this place had a coffee and snack bar.  The store however is tiny compared to the ones that used to exist back home.  I found it rather strange that within the limited selection of books there was a large number of science fiction titles by L. Ron Hubbard, the author who went on to found Scientology.

Once you get away from the major avenues, the neighborhood of San Pedro de los Pinos is a rather peaceful area with a small town feel.  Here Alejandro poses in front of the bandstand on the pleasant little plaza in the center of the "colonia". 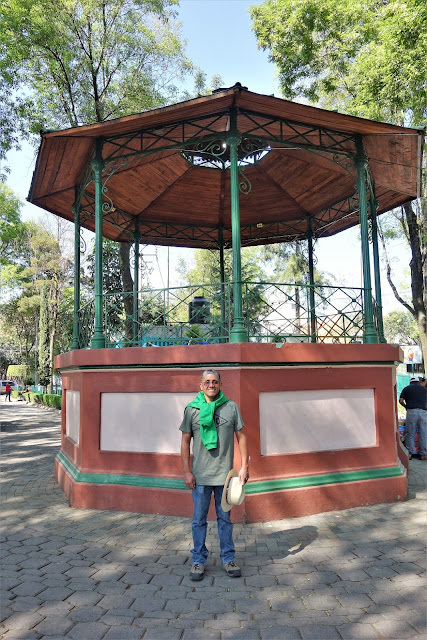 Next to the plaza is the neighborhood market building decorated with marine life mural. 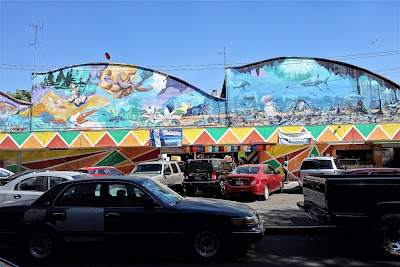 I prefer the market in Colonia del Valle that I wrote about a few days ago, but Mexican markets are always colorful, interesting places, so we went inside. 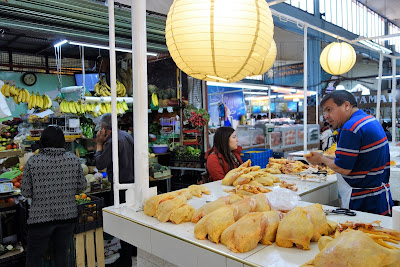 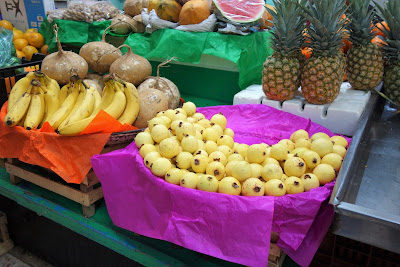 Besides the bananas and pineapples, here you see "guayabas" (guavas) and "jícamas", a large root vegetable. 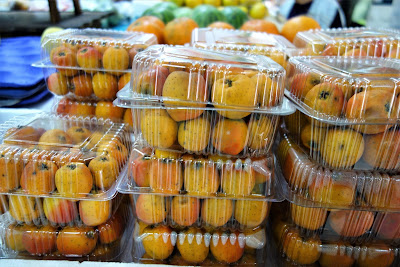 I think that these fruits are completely unknown in the U.S.  They are called "tejocotes" and they are used in the traditional Mexican Christmas punch. 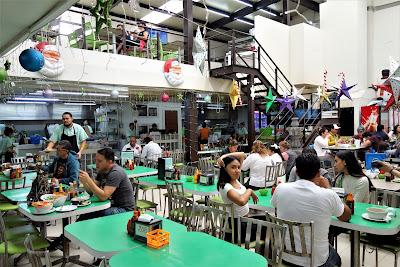 As in most Mexican markets, there are stalls selling food to eat on the premises... sort of like a food court.  Alejandro says that the stalls here at San Pedro de los Pinos are very popular, especially the ones selling shellfish.  They still have their Christmas decorations up.  Notice the one young lady who appears to be posing for my camera.

Here we see "ollas" (large clay pots) filled with the pastes which are diluted and simmered to make "mole". 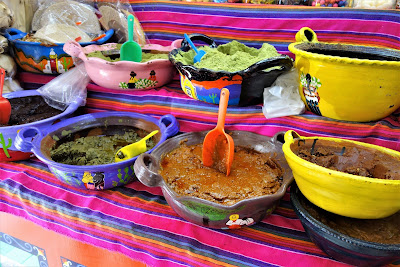 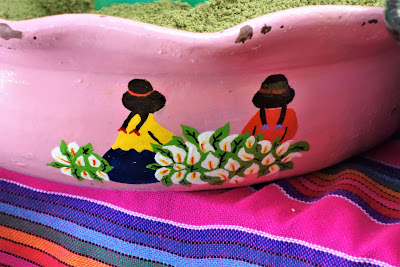 The vendor told us that her husband had painted the "ollas" himself.

Our route back toward the condo took us past Plaza México, the largest bullring in the world, and there was a bullfight that day.  The streets around the bullring had a carnival atmosphere with booths selling bullfight related trinkets. 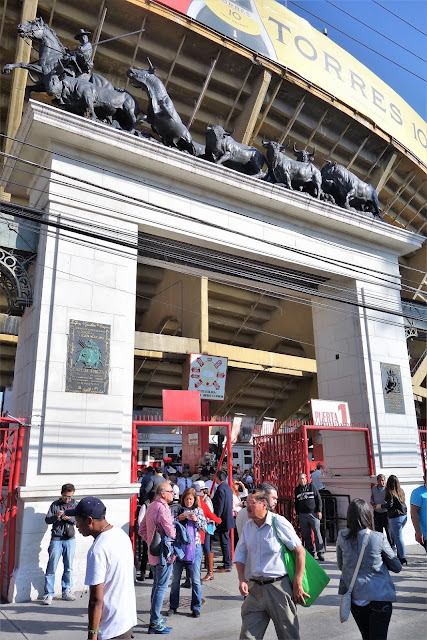 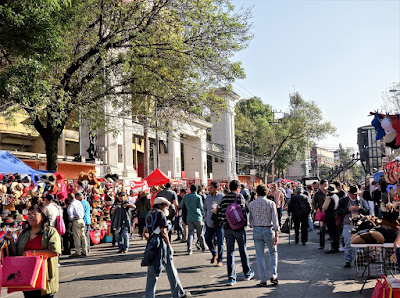 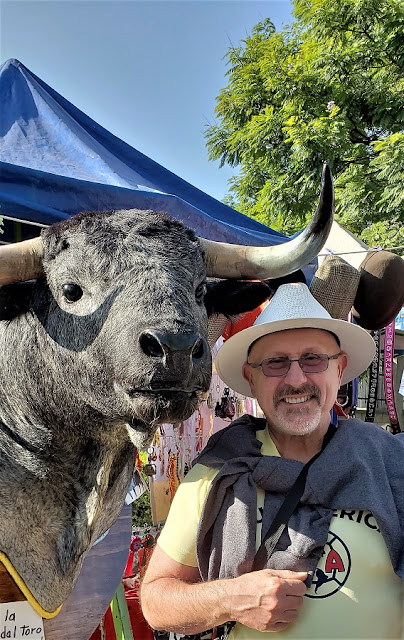