Up to the Castle

My cousin Brigitta is a school teacher, and on Thursday she had to attend meetings in preparation for the beginning of the new school year next Monday.  Her partner Peter, however, is a retired teacher, so today he and I took a walk up to Schloss Uster… Uster Castle... the most prominent landmark in the city of Uster.

We took a "Wanderweg", another one of those hiking trails that are ubiquitous in Switzerland.  Our path took us through a pleasant residential area, but we also saw fruit orchards, cows, sheep and chickens. 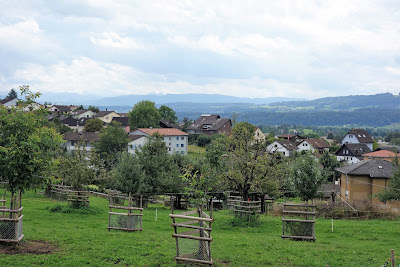 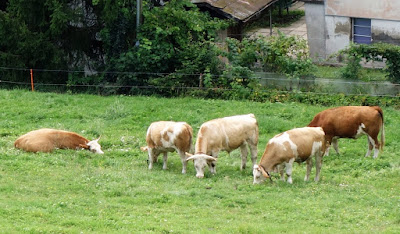 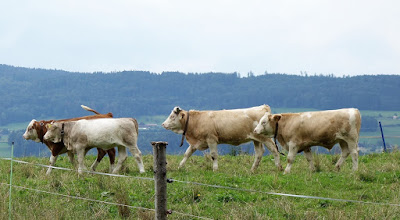 A city dweller from the U.S. might find it odd that we were passing cows grazing in pastures within the city limits of a town of 35,000 people.  However, in Switzerland forests and farmlands are protect by law from development.  Nearly 45% of the land in Uster is agricultural.  The one thing that these cows lacked were cowbells.  Those bells are a delightful sound which are so much a part of atmosphere of Switzerland.

It was an easy walk up to the top of the hill where the castle is located. 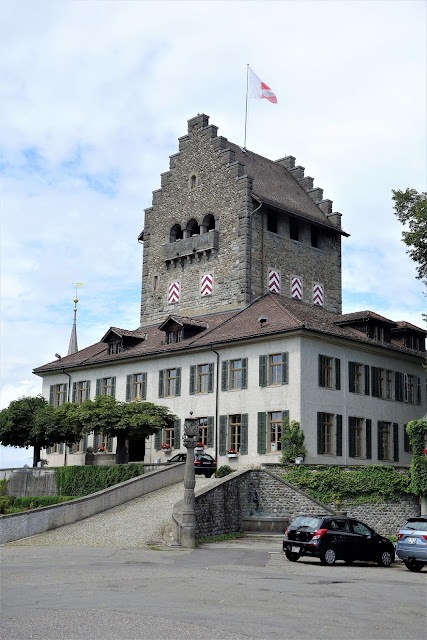 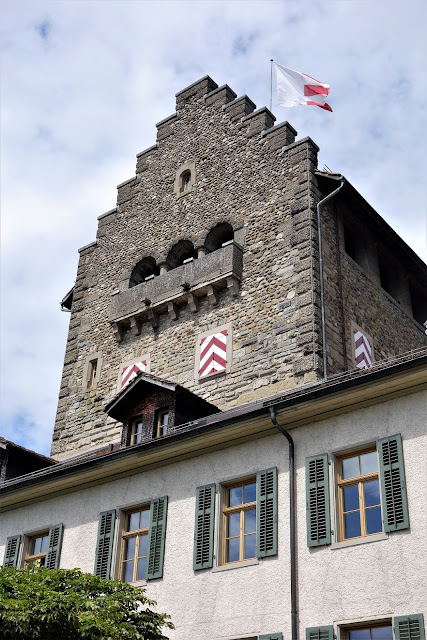 The castle was originally built in the 1200s, but has been rebuilt and renovated many times since then, most recently in 1917.  The building today is used as a private boarding school and is not open to the public.

Across from the castle is a restaurant which for many served traditional Swiss food.  Since 2009, however, it has been a steakhouse called "Argentina".  We went inside for lunch. 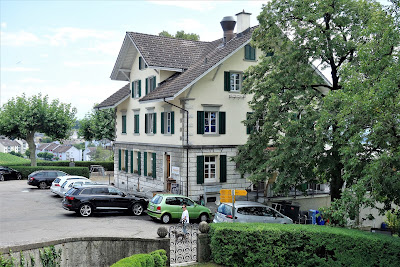 Our waitress was a lady from Colombia.  I spoke some German with her, but I spoke mostly Spanish.  Who would have thought that I would be speaking Spanish to a Colombian in an Argentinian restaurant in a small Swiss city!

We did not order steak, but rather the lunch special of the day, which was chicken cordon bleu.  It included a starter of soup or salad.  Peter had salad, and I had carrot soup. 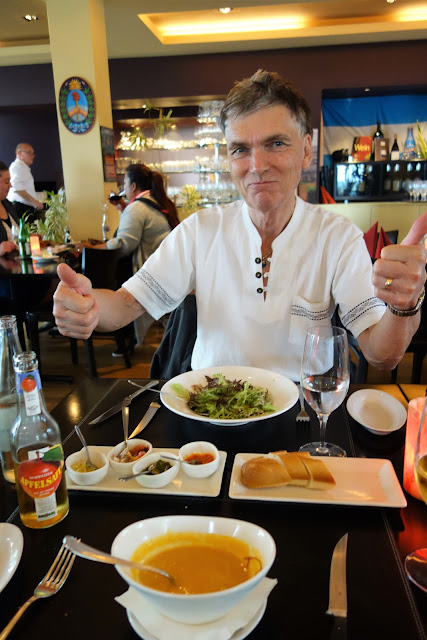 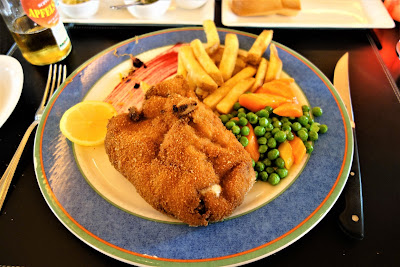 We also had dessert.  I had a scoop of raspberry sorbet and Peter had an apple tart.

I treated Peter to lunch, and fortunately I had brought plenty of Swiss francs with me.  Switzerland of course is a notoriously expensive country.  Even though we were not eating in a touristy restaurant, and we ordered the special of the day, the bill came to 72 Swiss francs, about 73 U.S. dollars.  At least in Switzerland you do not have to tip much.  Peter said that the tip of 5 francs... less than 7%... was generous.

Although it was raining on our way up to the castle, during lunch the sun came out, and after eating I took some pictures of the view from the top of the hill. 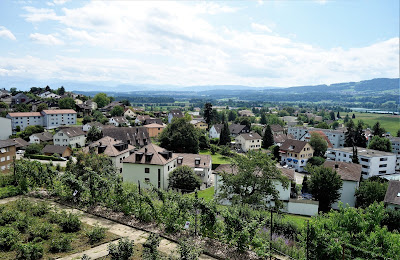 At the upper right you can see a small sliver of the Greifensee, the lake which I mentioned in my previous post. 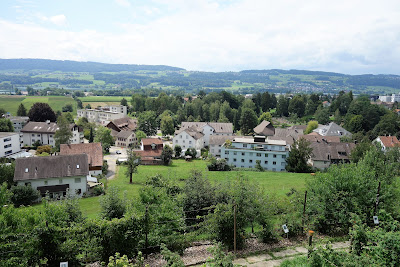 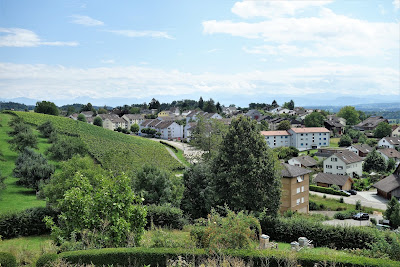 On the hillside to the left is a vineyard which produces a local wine.  Peter served some the night before at supper.  I am not a wine connoisseur, but I thought it had a very unique flavor which I liked. 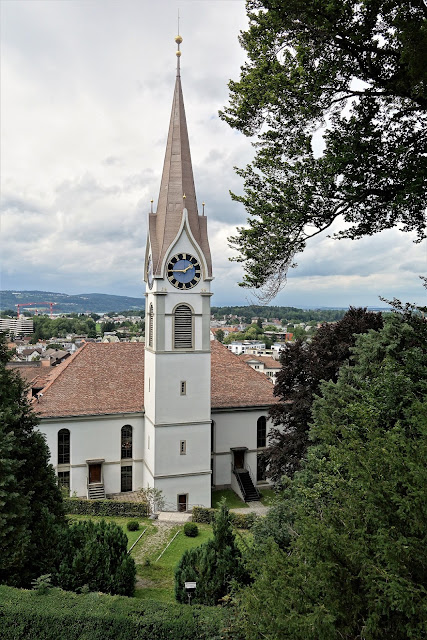 This Swiss Reformed Church was built in 1828.  It stands at the foot of the castle hill. 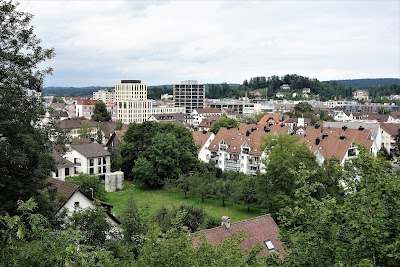 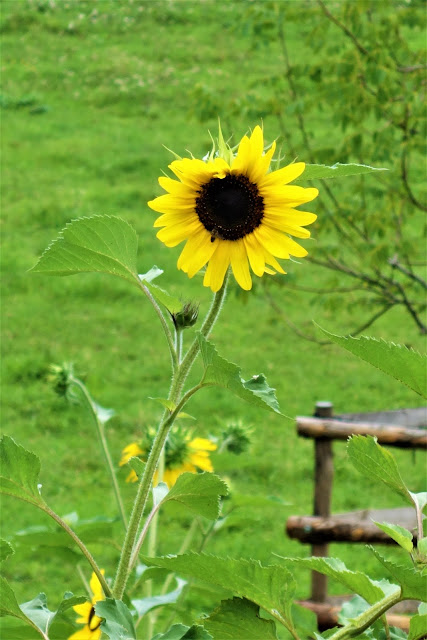