One of the most popular side trips from Vienna is the little town of Melk located on the banks of the Danube River about fifty miles from Vienna.  It is famous for its Baroque Benedictine monastery.  I read in Rick Steve's guidebook that the Austrian Railways sells a "combi-ticket" that includes the train ticket to Melk, admission ticket to the monastery, a river cruise on the Danube, and the train back to Vienna.  So that is what I did on Friday.

You can take any one of numerous trains leaving the main train station in Vienna.  I was up early and took the 7:30 train.  You have to change trains in St. Pölten and there is perhaps ten minutes between connections.  The train from Vienna arrived in St. Pölten about five minutes late, so I had to scurry, look at the departures board, and figure out from which platform my next train was leaving.  I just made it on board.  (It was not really a big deal, however, since there would have been another train in a half hour.)

It was still early.  It was a gray, dreary morning, but at least it wasn't raining. The monastery was not yet open, so I explored the town a bit first. 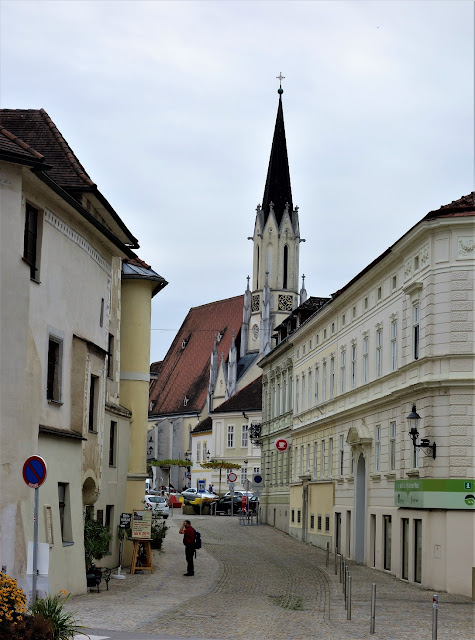 The imposing monastery sits atop a hill which overlooks the town. 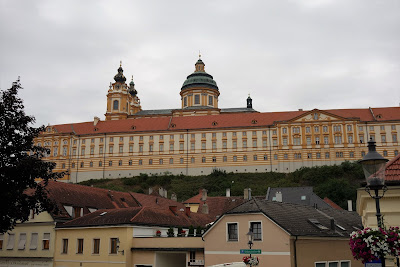 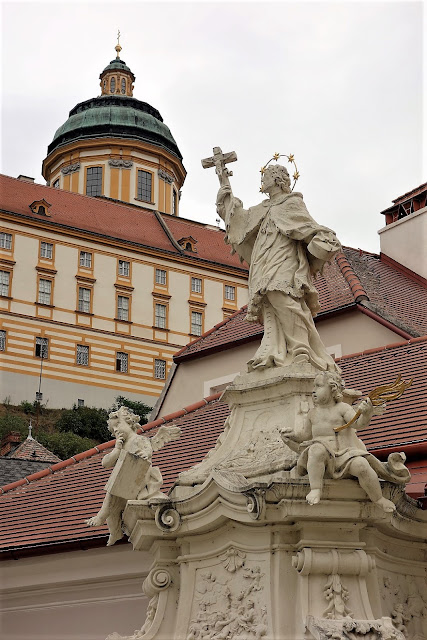 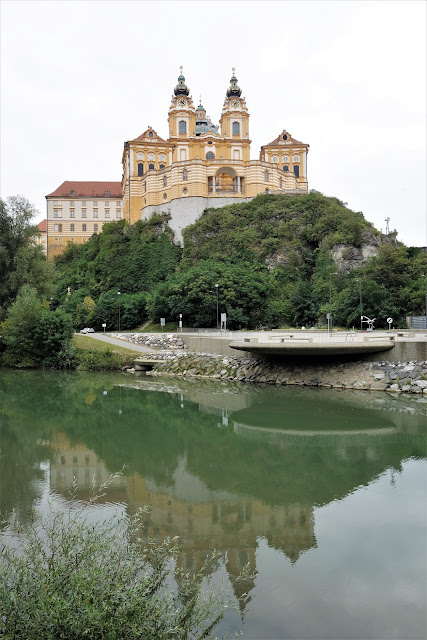 At first I couldn't figure out at first how one reached the monastery.  I didn't see any directional signs with a word that looked like "monastery".  Only later did I realized that the abbey is referred to as a "Stift", which is odd because that is the German word for "pen".  But I found a street going uphill that was lined with restaurants and tourist shops, so I figured that it was the route.

The monastery was first established in the 11th century, and with its large library became a center for learning in the Middle Ages.  The current building dates from the 18th century, and its Hapsburg patrons spared no expense at creating one of the most lavishly Baroque monasteries in Europe. 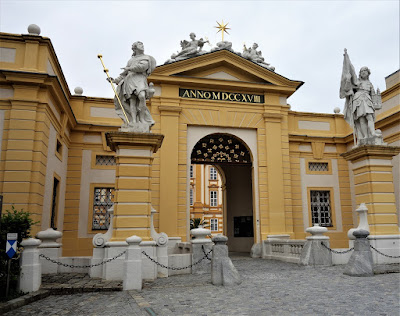 The entrance to the abbey 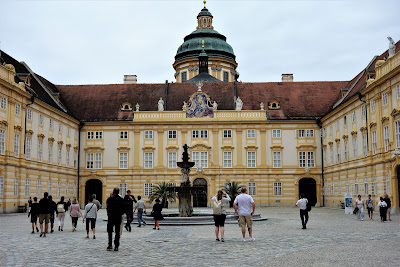 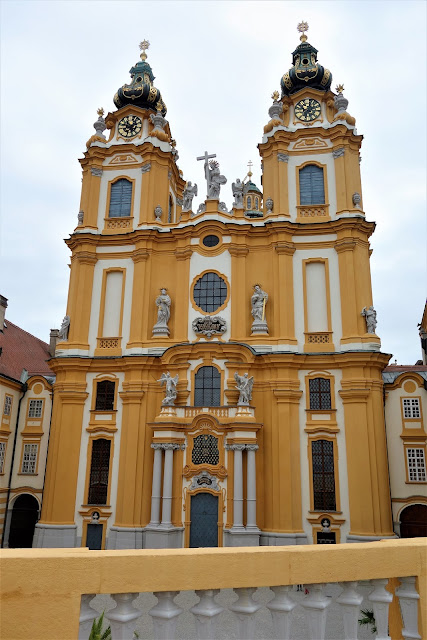 And that's it for photos.  Photography was not allowed anywhere inside... not even in the mediocre museum.  There were crabby, eagle-eyed ladies everywhere, and I was scolded by one because my camera, dangling from my wrist and not even in position for a photo, was still turned on as I entered the church.

I have very mixed feelings about places such as this that do not allow photos.  I am not a churchgoer, but I can respect the fact that it is a place of worship. But why are photos not allowed in the ornate Marble Hall where royal guests were received or in the incredible library with shelf upon shelf of medieval books?  And what makes this place more sacrosanct than the seven churches I visited the day before where there was no problem with non-flash photography.  I guess what really irks me is that the monastery is a "cash cow", charging admission to the thousands of tourists who visit, and making money from the not one, but TWO gift shops.  Reminds me of the Bible story about the money changers in the temple.  If they are going to make the monastery a commercial enterprise, they shouldn't be bent out of shape because the tourists want to take photos.

Anyway, the church is incredibly ornate, perhaps one of the most lavish churches I have ever seen.  Here is a photo I found on the internet of the church interior. 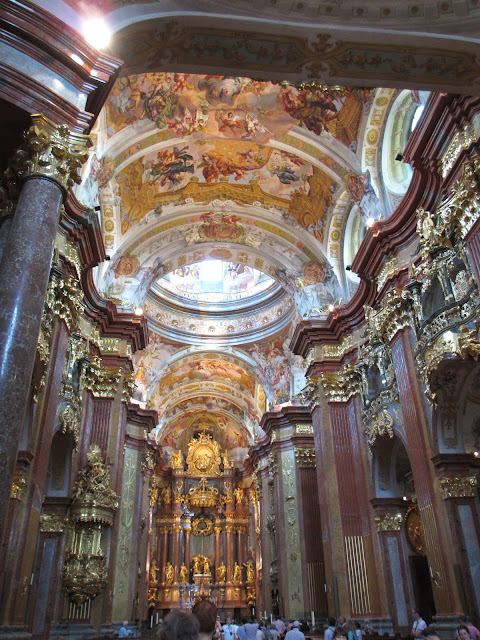 From the terrace of the church there are nice views of the village of Melk and the Danube Valley. 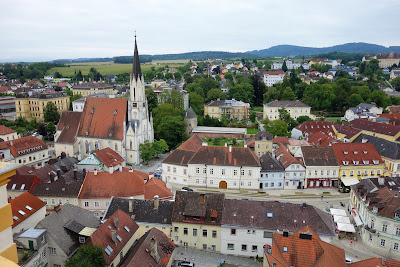 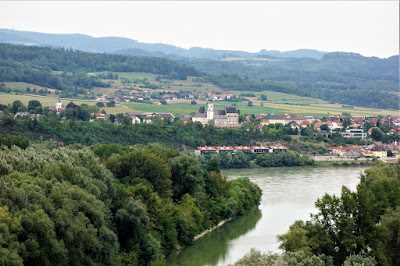 By the time I headed down the hill, back to the village, the clouds were breaking up, and the sun was out.  Melk is a very old and very picturesque town. 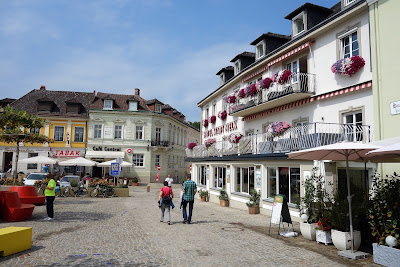 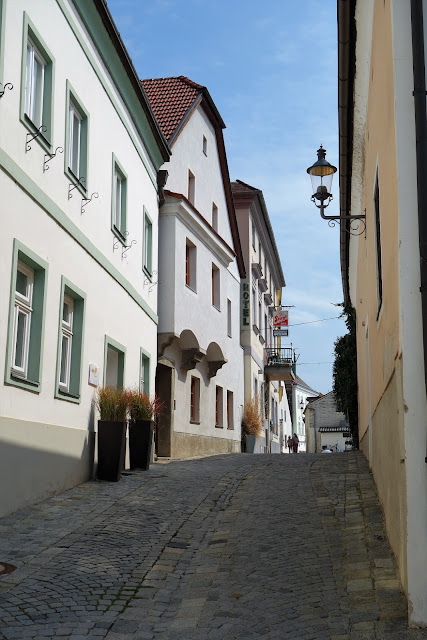 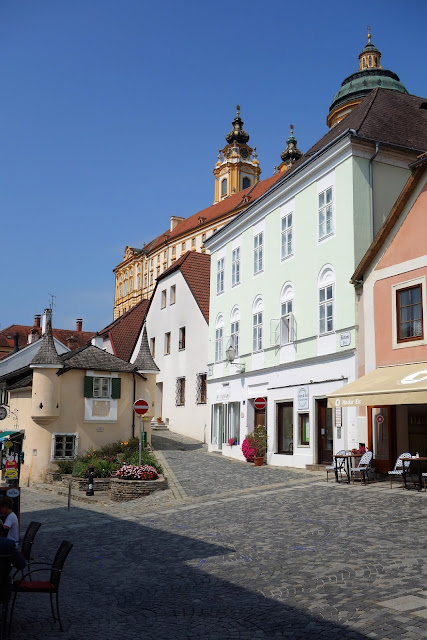 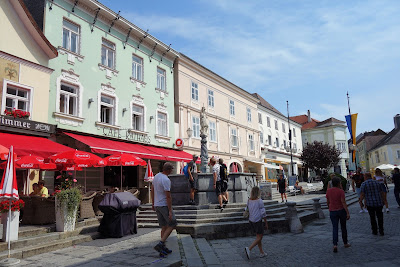 However, it is definitely a tourist trap.  I had my first bad meal of the trip there... "Kümmelbraten", roast pork with caraway seeds.  The slice of pork was half fat.  On the positive side, at one of the numerous ice cream shops, I did have some delicious raspberry ice cream.  And in one of the souvenir shops I bought some high quality, "made in Austria" handicrafts.

By one in the afternoon it was time to think about heading down to the waterfront to take my Danube River cruise. 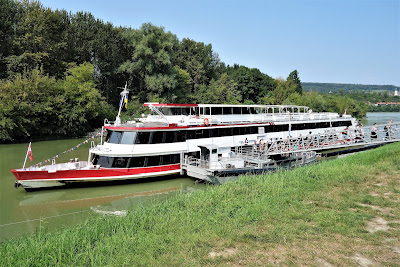