On Saturday I visited the Hofburg, the winter palace of the Hapsburg rulers.  The huge complex grew and grew through the centuries into a maze of buildings and courtyards. Today it includes numerous museums, the National Library, the Spanish Riding School where the Lipizzaner stallions perform, and government offices.

The central portion of the palace features a large dome over an archway. 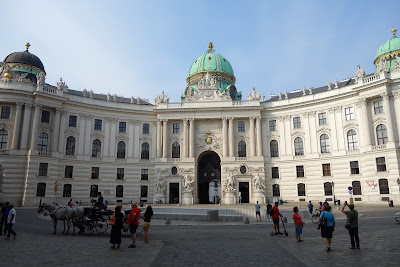 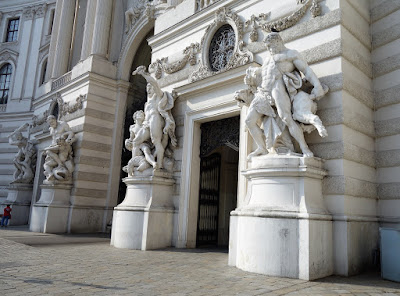 .
You pass through the arch and under the dome... 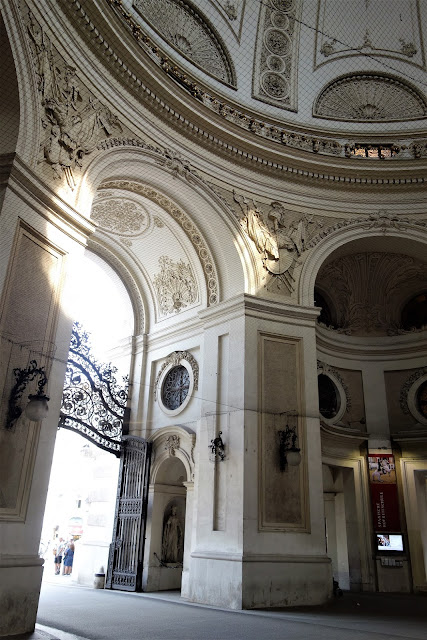 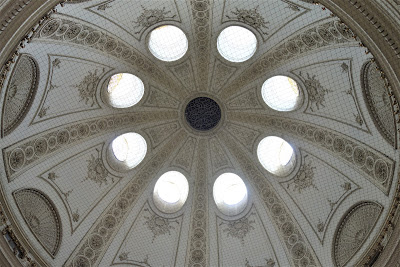 … and from there into a palace courtyard with a statue of Emperor Franz II. 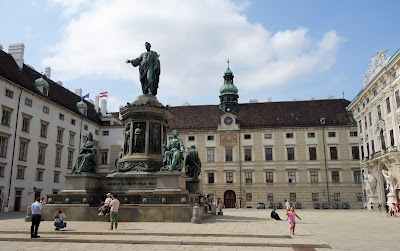 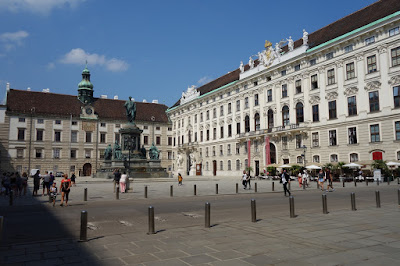 That courtyard leads out to another wing known as the New Palace.  Here are the National Library and four lesser museums. 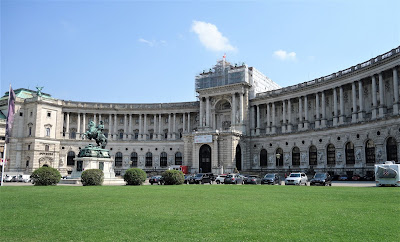 In a courtyard in an older part of the palace are the Hofburg Treasury and the Imperial Music Chapel.

One walkway passes the courtyard where the stables of the Spanish Riding School are located.  There you can get a glimpse of the Lipizzaner stallions. 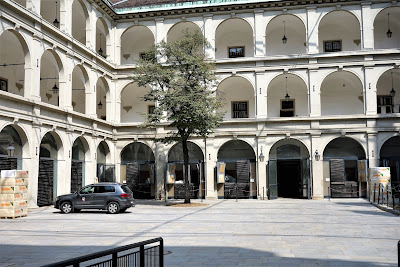 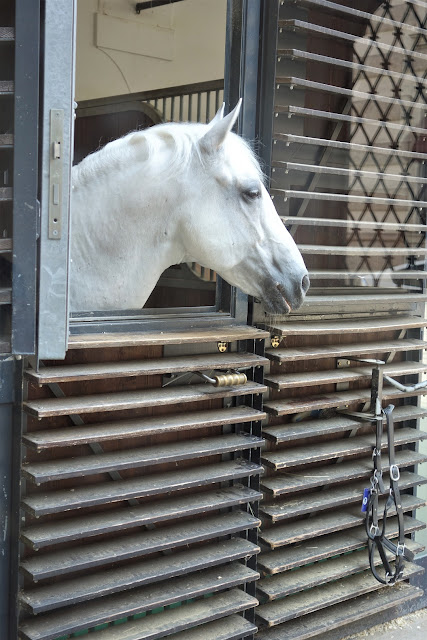 You could probably spend most of a week just seeing everything there is to see in the Hofburg.  The ticket that I had purchased prior to my departure included entrance to three attractions: the porcelain and silver collection, a museum dedicated to Empress Elizabeth, the wife of Franz Josef, and the Imperial Apartments.

In the first section, with case after case of chinaware, silver and gold gilt table decorations that belonged to the Hapsburgs, photography was allowed. 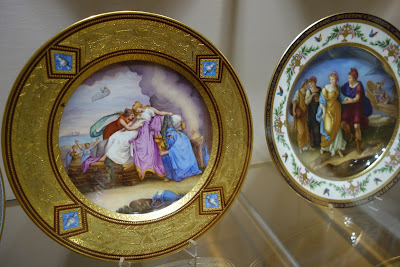 That gave me hope that photography would also be allowed in the other two attractions on my ticket.  But no such luck.

The Sisi Museum (Sisi was the nickname of Empress Elizabeth) portrays the life of the beautiful but eccentric and unhappy wife of Franz Josef.  At the age of 60 her life was cut short when she was stabbed to death by an assassin.  She has become a legend, You will see her image on all sorts of knick-knacks in every souvenir shop in the city. 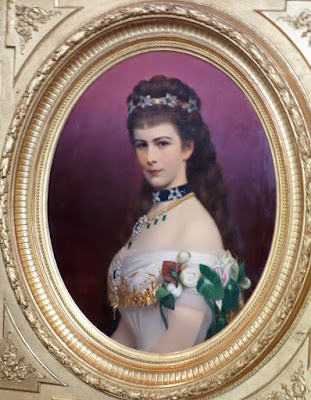 In the Imperial Apartments you see the living quarters of Franz Josef and Sisi.  Here is a picture I found on the internet of Franz Josef's office.  Although he was an autocrat and an arch-conservative, he took his position seriously and considered himself the servant of his people.  He got up at 3:00 A.M. daily and worked all day in his office. 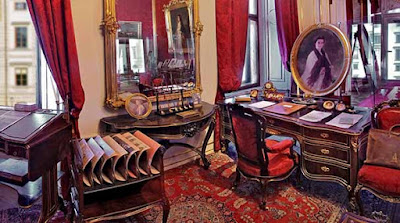 From the Hofburg I took the tram to another palace... Belvedere Palace.   It was the home of Prince Eugene of Savoy, a French nobleman who offered his service to the Hapsburg Emperor when Austria was threatened by the advance of the Ottoman Turks.  When Eugene defeated the Turks in 1683, he became the hero of Austria. 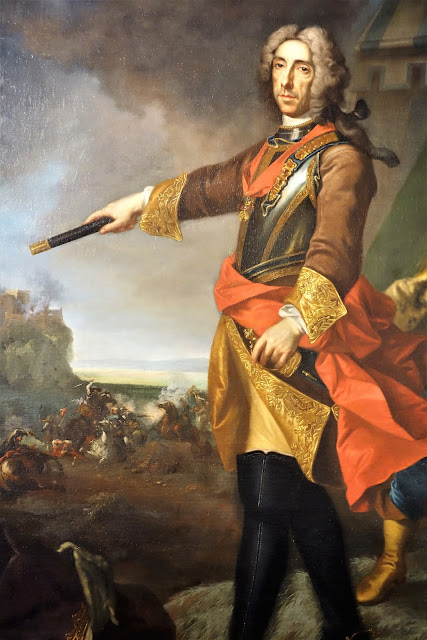 He amassed great wealth from his conquests and was able to build a palace to rival the Hapsburgs.  In fact, he built two palaces, the Lower Belvedere to live in, and the Upper Belvedere for entertaining.  In between the two was an enormous garden. 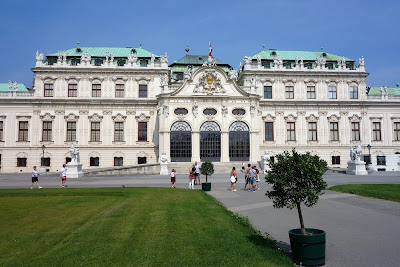 Looking across the gardens to the Lower Palace, and the skyline of Vienna beyond.
Notice the spire of St. Stephen's Cathedral in the distance. 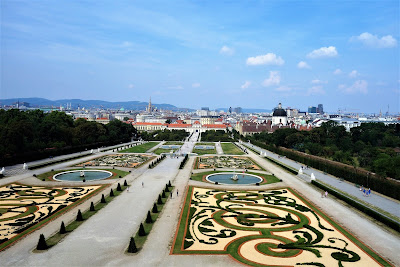 Views of the gardens 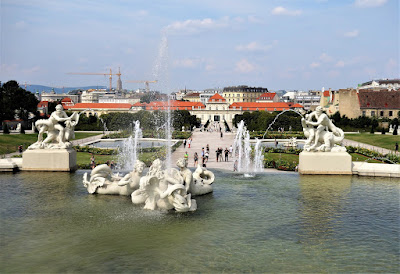 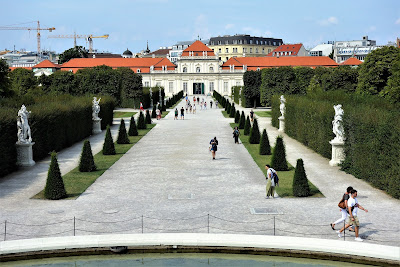 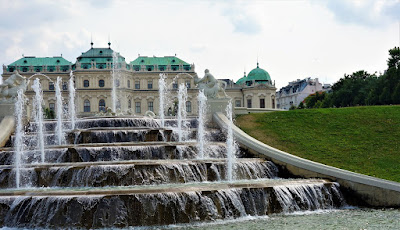 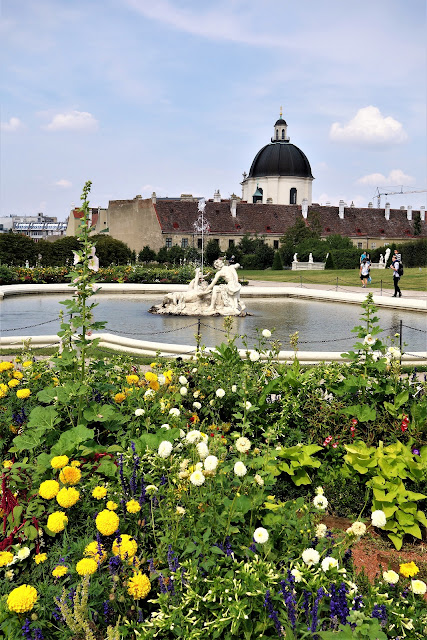 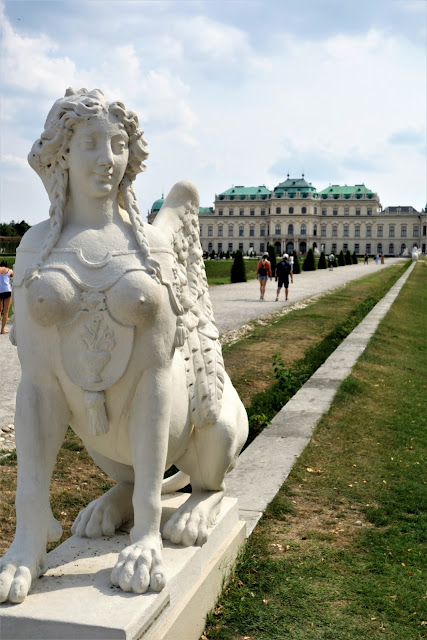 Both palaces are museums today, but it is the Upper Palace that draws the most tourists.  It is today an art gallery, although the Marble Hall and the Chapel attest to the opulence of Prince Eugene's home. 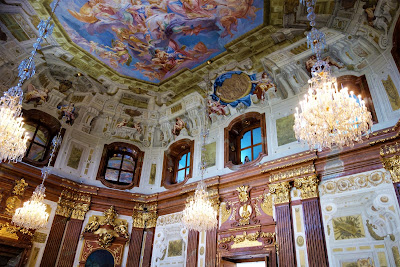 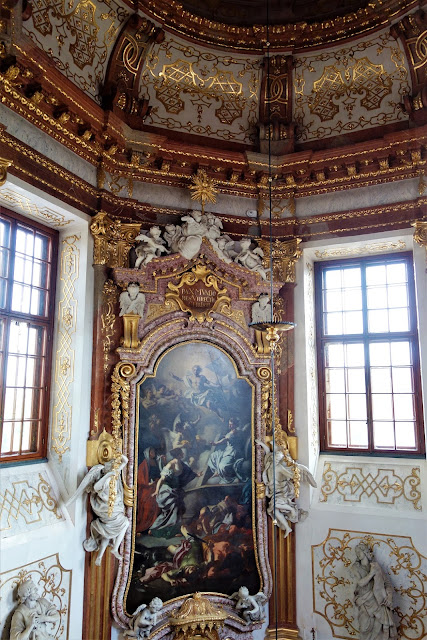 The art collection here draws heavily on Austrian artists, but there are numerous pieces by well-known painters from outside Austria. 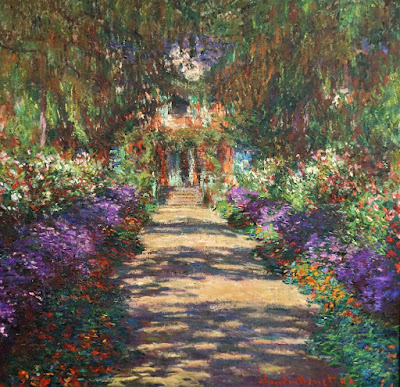 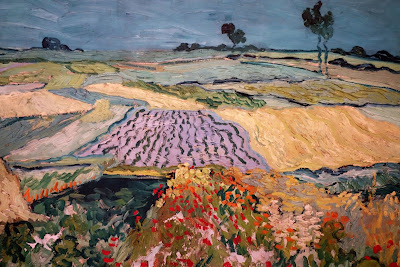 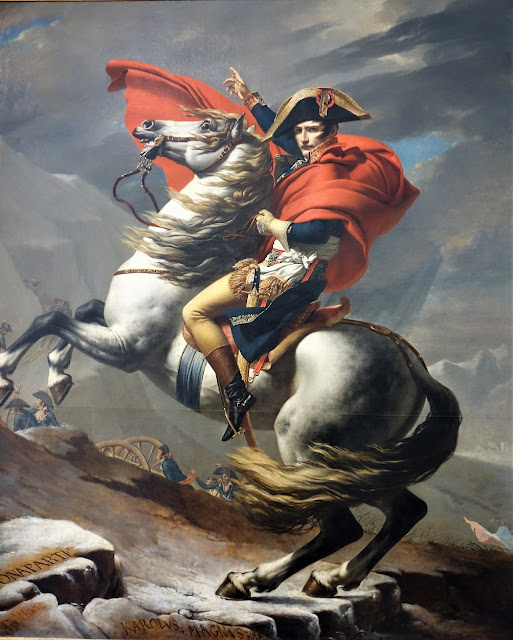 I was surprised to see this famous painting of Napoleon by Jacques-Louis David.  I would have assumed that it is in the Louvre.  I later did a bit of research on the painting.  David did five versions of this portrait... however, none of them are in the Louvre.

The star of the show is the collection of paintings by Austria's most famous artist, Gustav Klimt.  The Belvedere has the best known of his works, "The Kiss". 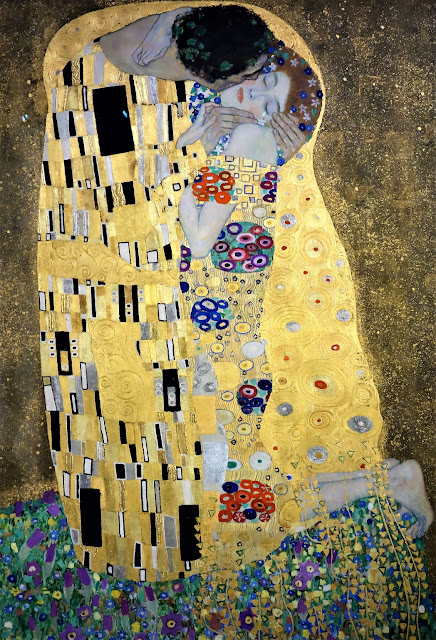