Usually when I first visit a city I walk around and orient myself.  However, on my first day in Vienna I went to Schönbrunn Palace, the summer home of the Hapsburg emperors of Austria.  My cousin Gail had told me that the palace is not air conditioned and that it was very hot on their recent visit.  Since the temperature was forecast to be rather cool on Wednesday, I decided to do the palace that day.  I also know that the palace is mobbed with tourists, so I wanted to get there at opening time, 8:30.

Wednesday morning I got up at 6:00 AM.  I went to the train station across the street to buy a seven day ticket for public transportation and to hit an ATM.  I then went to a grocery store in the train station to buy something to take back to the hotel for breakfast.

I then used Vienna's public transport for the first time to get to the palace.  The city's subways, trams and bus lines are excellent, but going to Schönbrunn was going to be a challenge, because the U-Bahn (subway) line that would be the easiest route is closed for repairs.  I had to go to the train station, find the #18 tram, transfer to the #6 line of the U-Bahn, and then get on the #4 line.  By the time I got to the palace it was 9:15, and there were already loads of tourists there.  Fortunately I had purchased my ticket online before leaving on this trip, so I did not have to wait in line at the ticket window.  In spite of the cool weather that day, it was still very stuffy inside the palace. 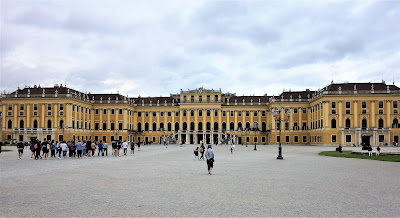 Schöbrunn was originally the site of a royal hunting lodge in the forested outskirts of Vienna.  In the 18th century during the reign of Empress Maria Theresa the palace took on its current form.  It served as the summer palace of the Hapsburgs until the end of the dynasty at the end of World War I in 1918. 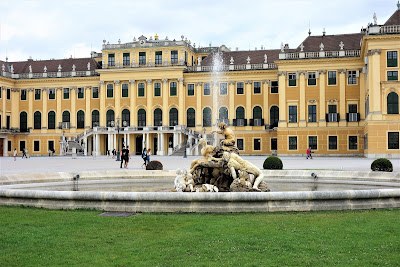 Photography is not allowed in the palace, but I found a couple pictures on the internet to give you an idea of the opulent interior... 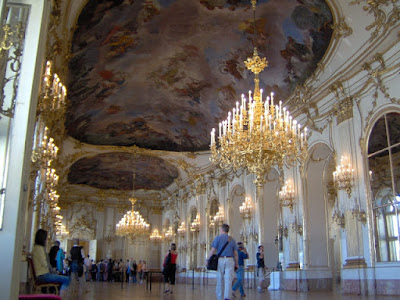 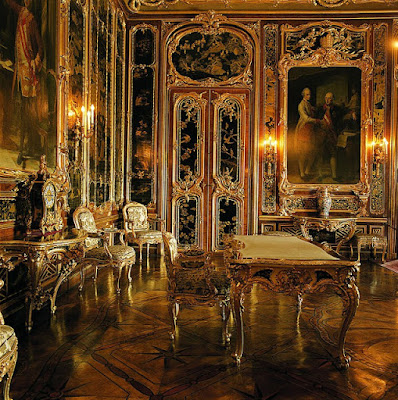 I actually spent more time exploring the extensive gardens behind the palace.  The grounds extend some distance and then climb up a hill where Empress Maria Theresa had a structure called a "Gloriette" constructed as a place for parties. 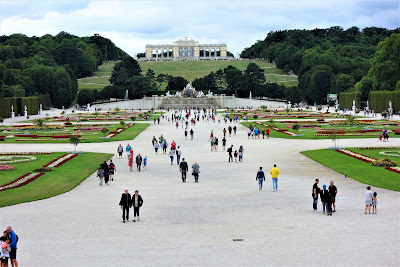 There is an extra charge to go onto the terrace of the "Gloriette" (unless you are going to the expensive café that is now located inside).  However, the view is just as good from the hill before you reach the "Gloriette".  Of course, I had to make the trek up the hill and take some photos. 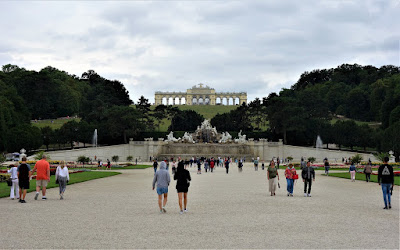 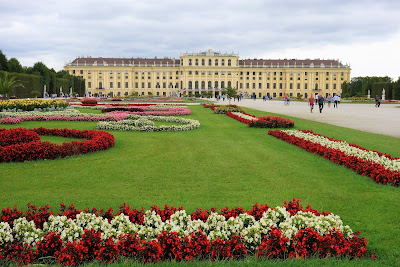 At the foot of the hill, there is a baroque fountain called the Neptune Fountain. 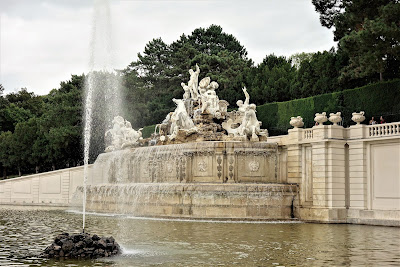 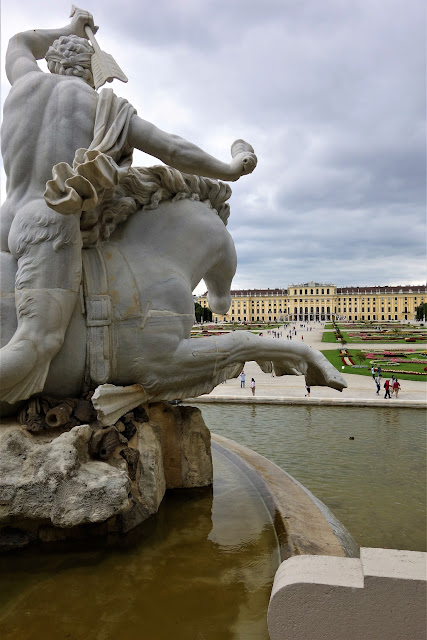 The view of the palace from behind the Neptune Fountain. 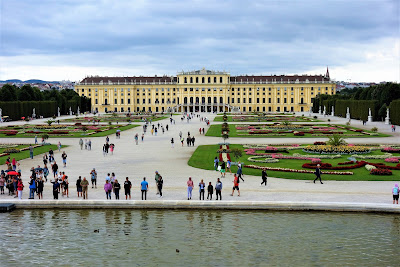 I am now almost to the "Gloriette"... 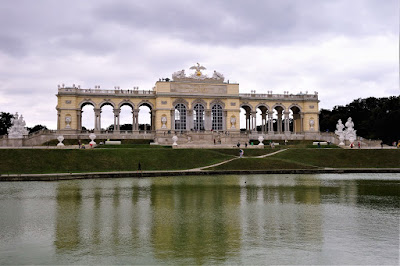 … and I have the view that I wanted. 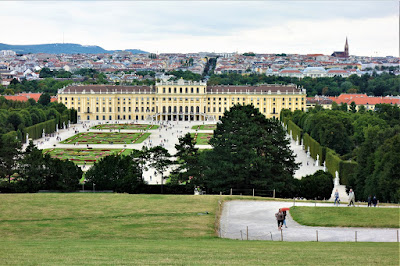 On the horizon to the right you can see the tower of St. Stephan's Cathedral in the heart of the old city.

I was not finished wandering around the gardens however.  There are a couple other features worth seeing.

In the 18th century garden designers liked to build structures that the English called "follies".  During the "Romantic Era", there was a fascination with ancient ruins. Tucked away in the Schönbrunn gardens is a rather amazing "folly" that was originally called the Ruins of Carthage. 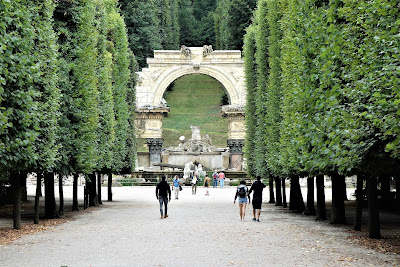 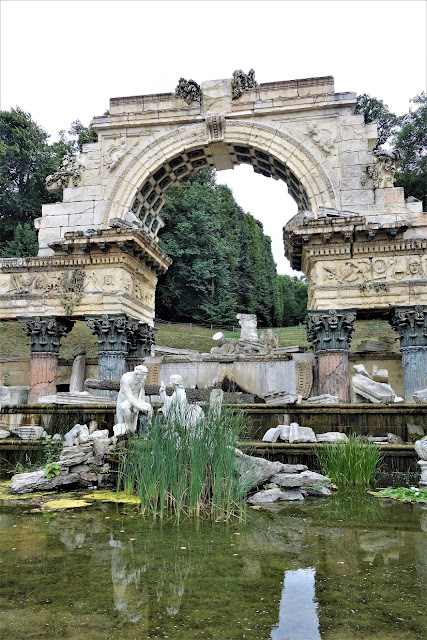 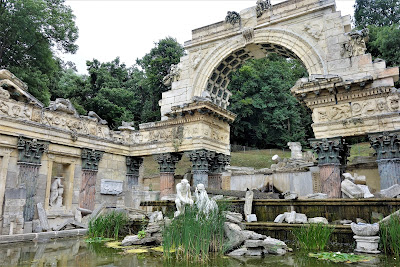 Nearby is the Obelisk Fountain, a monument in honor of the Hapsburg dynasty. 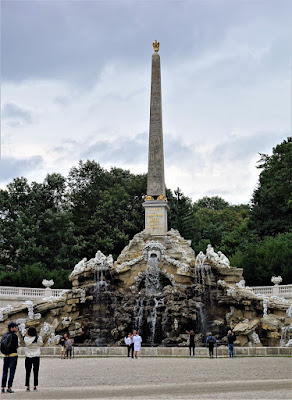 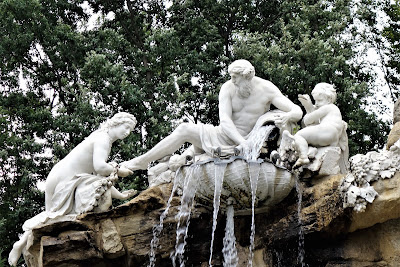 The obelisk is inscribed with phony hieroglyphics (at that point in time, the Egyptian hieroglyphs had not yet been deciphered) that supposedly tell the history of the Hapsburg family. 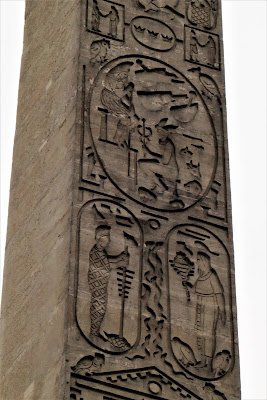 After several hours on my feet, touring the palace and wandering in the gardens, I was getting tired and hungry.  It was time to leave Schönbrunn. 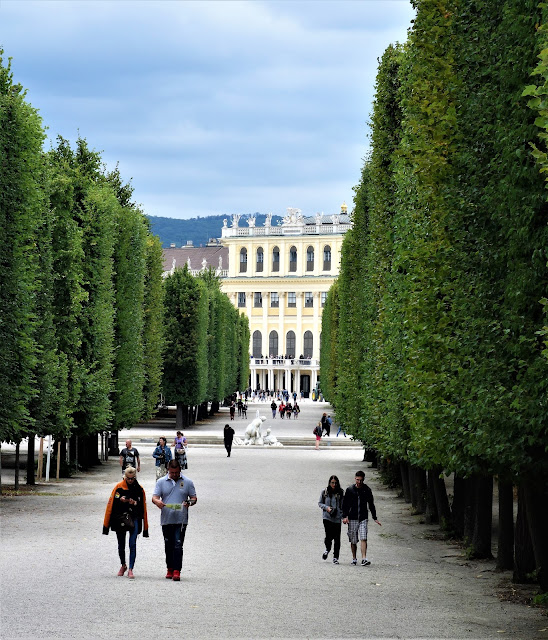