On Tuesday I had tickets to travel by train from Zurich to Vienna, Austria.  Instead of driving me to the train station in downtown Zurich, cousin Werner thought that it would be better for me to take a train from Lenzburg to the Zurich station.  Sometimes when there is an accident on the highway to Zurich, traffic can be delayed for hours.  So he drove me to the little Lenzburg station, he helped me buy my ticket from the machine, and we said farewell. 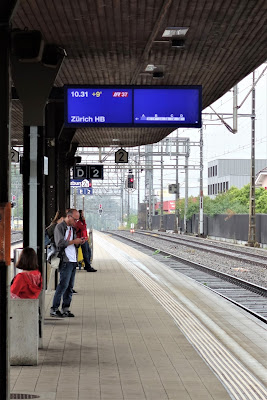 On the platform in Lenzburg

It was a direct train and within twenty minutes I was in the "Hauptbahnhof" (main train station) of Zurich. 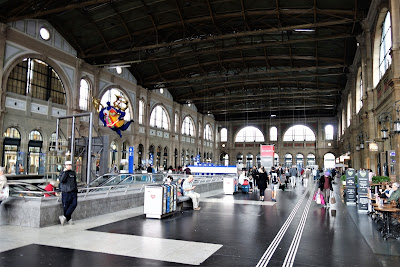 I waited in a waiting room, and twenty minutes before departure, my train appeared on the board along with the track number. 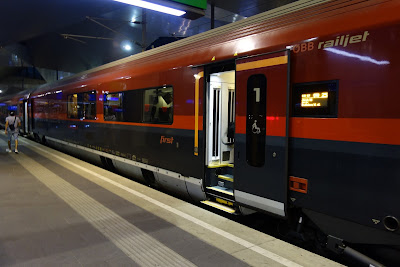 In typically punctual Swiss fashion, the train left right on time.  Although the train is called a "railjet", it was not a high speed train and it made many stops along the way.  In fact Vienna was not its final destination; it went on to Bratislava, Slovakia.  Because it was a long trip, almost eight hours, I had splurged and bought a first class ticket. 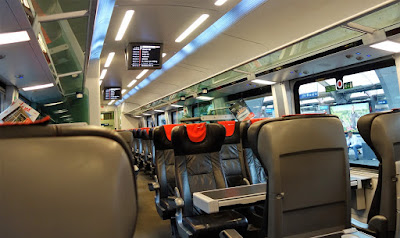 The journey was very comfortable, although the food in the dining car was nothing to write home about.  My major disappointment was with the weather.  The route went through some spectacular scenery, but it was dreary, rainy day.

We headed out along the shore of Lake Zurich. 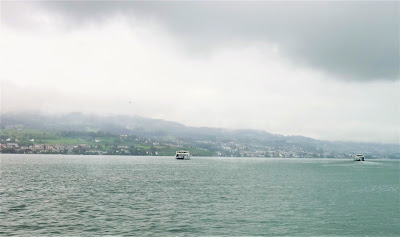 By the time we reached the Austrian Alps, at least the rain had stopped, although it remained overcast.  I was able to take a few decent pictures. 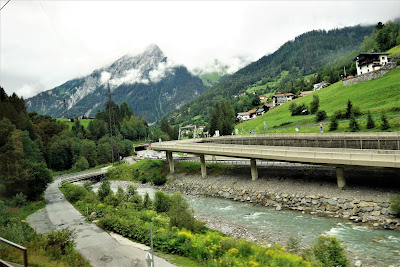 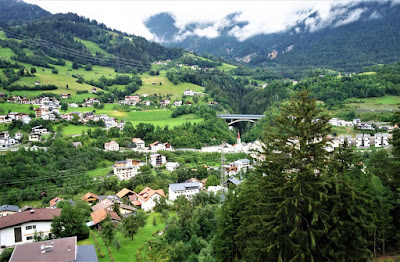 Right on time at 8:30 PM we arrived at Vienna's "Hauptbahnhof".  The multilevel train station is brand new.  It is like a city onto itself.  In additional to trains, it is a hub for the U-Bahn (subway) and several tram lines, and it has over ninety stores and restaurants.

My hotel is right across the street from the train station so I could simply wheel my luggage to the hotel.  (Fortunately it was not raining.)  The only problem was figuring out which exit out of the station I should use.  I went outside, and there was a street map, and I was able to get my bearings.

My hotel, the Ibis, is brand new just like the train station.  In fact the whole neighborhood seems new with more buildings under construction. 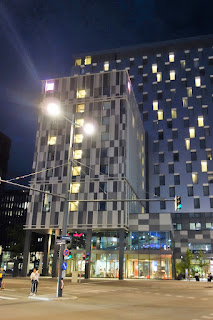 The price was quite economical... under $100... but my room is exceptionally spacious for a European hotel.  There is plenty of space to move around in this room.  As I work on the blog at the desk, I can look out the window and see the trains coming and going. 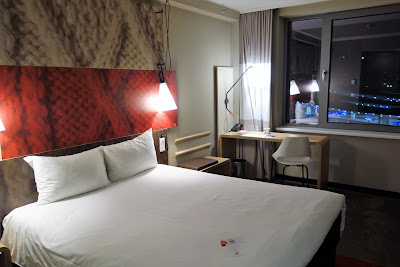 I suppose the price is reasonable because the hotel is not located in the heart of Old Vienna.  But it is only three subway stops to the very center of the city.  I think I will be quite happy being here for eight nights.
Posted by Retired Teacher at 2:58:00 PM