The initial, short leg of my journey is complete.  I am writing this from the Swiss Lounge at O'Hare Airport in Chicago.

My flight from Cleveland to Chicago was in one of those little commuter jets that I refer to as "puddle jumpers".  They are not very comfortable, but at least I had an exit seat so there was plenty of legroom, and it is only an hour flight. 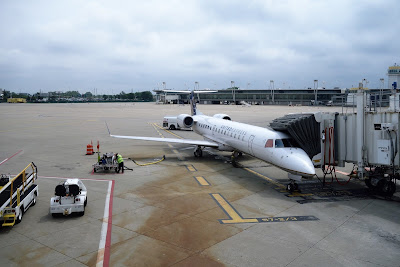 My "puddle jumper" awaits at the gate in Cleveland.

While waiting at the gate I talked with another couple who were also flying to Switzerland.  They were taking an earlier flight on Swiss Airlines from Chicago to Zurich.  Their layover in Chicago was a shorter than I would like, less than two hours.  This was their first trip to Europe, and they were going to take a river cruise down the Rhine River.  I told them... based on my previous experience flying to Switzerland... that they should follow the signs to baggage claim and from there take the train to Terminal 5, the international terminal.  There they would have to go through security again.

I just hope that they did not follow my instructions, and miss their flight because of me.  Work is being done on the train between terminals.  For the time being, you have to take a bus from one end of Terminal 1 to the international terminal.  When I realized the change I even went back to see if I could find them. (They had been waiting for their gate-checked carry-on.)  But I didn't see them.  I hope that they noticed the signs saying "Transfer to Terminal 5".

You have to wait in line for the bus to Terminal 5.  It is not a very efficient system, but the good thing is that you are remaining within a secured area, and you do not have to go through security again when you arrive at the terminal.

I had a long layover, but I was looking forward to spending that time in the Swiss Airlines Lounge.  (Since I am traveling business class, I have access to their lounge.)  I had been told that the European airlines have much nicer lounges than the U.S. airlines.  Well, I entered the Swiss lounge, and, frankly, I was rather disappointed.  It is nothing special, and it is tiny compared to the United Airlines lounges in Houston and Chicago. 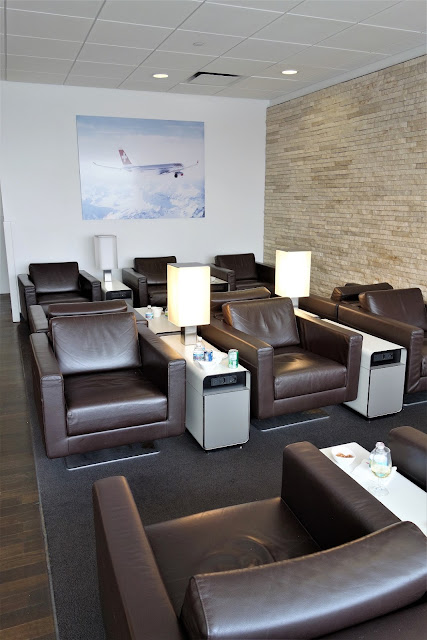 This photo shows about 25% of the entire facility.

However, since they do not carry the volume of passengers, it is much quieter than the United lounges.

In a couple more hours I will be boarding my flight to Switzerland.