The Butterfly Tour - The Good, the Bad, and the Ugly

On Saturday I went with Alejandro's family on  a full day excursion to the Piedra Herrada Butterfly Sanctuary.  Each winter the monarch butterflies make their migration from Canada and the United States to the pine forests of central Mexico.  Most of the butterfly sanctuaries are in the state of Michoacán, but Piedra Herrada is in the State of Mexico, about seventy miles to the west of Mexico City.  It is the most accessible reserve from the capital... and therefore the most visited.

The tour was organized by a local agency, and I was the only "gringo" in the group.  Our tour bus left Mexico City around 7:30 A.M.  It was a comfortable bus, and I enjoyed the ride.  Since we had to leave the house early without having breakfast, Alejandro's sister Sandra had prepared "tortas" (Mexican sandwiches on thick, crusty rolls) the night before for us to eat on the bus.

The bus headed out of Mexico City, over the mountains and through Toluca, Mexico's fifth largest city.  From there we took a winding road climbing into more mountains.  The scenery was beautiful.  By about 10:30 we had reached Piedra Herrada.  Given the fact that there was not much traffic along the mountain road, I was shocked when we reached the reserve. The large open field at the entrance was a parking lot filled with tour buses, vans and automobiles. 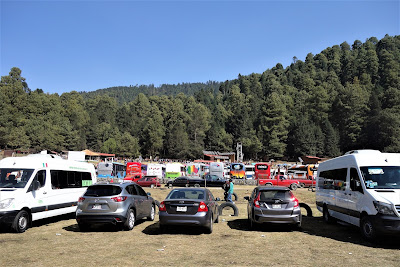 A tiny fraction of the parking lot

I thought to myself, "This is worse than the hordes of tourists that descend upon the Mayan ruins of Chichén Itzá!"  We went through the ticket gate.  The entrance is 70 pesos and was included in our tour price.  The reserve is located on an "ejido"... rural land that is owned communally by the local inhabitants.  The admissions, the rental of horses, the food and handicraft stands, even the 5 peso fee to use the restrooms all benefit the villagers.  So they must have a very good, although seasonal, source of income.

I had been really concerned about whether or not Alejandro's father would be able to handle the hike up the mountain.  As it turned out, just the trek across the parking lot and through the ticket gate was all he could handle.  So we found him a comfortable place to sit in the shade, and he sent us on ahead.

The crowds of visitors wait at the trailhead to be allowed to continue.  The trail itself is a steady stream of people heading up the path. 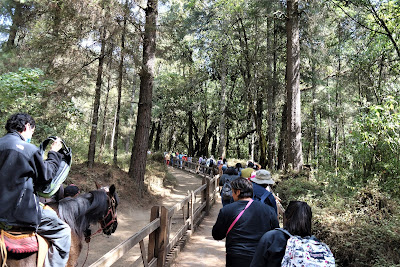 You can rent a horse to go up most of the way.  But those poor creatures looked exhausted and not very well cared for.  They were at least well fed judging by the amount of poop that they deposited along the trail.  The horses also raised up clouds of dust (dust that surely contained fecal matter).  Alejandro had a bandana with him which he frequently had around his face.  I held a wad of Kleenex up to my nose and mouth each time there was a cloud of dust.

Although the incline did not look that steep, the climb was very strenuous, especially at first.  The altitude here was probably at least 9000 feet above sea level... a couple thousand feet higher than Mexico City.  My heart was pounding, and I was huffing and puffing.  I thought, "This is worse than climbing the pyramids!"  After halting a couple times to catch my breath, the climb seemed to be easier.  I don't know if it was because the path leveled off a bit, or if I was simply acclimating to the altitude.  I had brought with me my hiking sticks.  I gave one of them to Alejandro's eight year old nephew Ezra.  I don't know if he really needed it, but I think he felt rather special having his own hiking stick.

We hiked about 45 minutes and entered the forests of "oyamel" pines where the monarchs congregate.  These trees provide the humid microclimate the butterflies need so that they do not dry out, and the trees are sturdy enough to support the tens of thousands that roost during the night and when it's cloudy.  The day we were there was sunny and warmer than average, so the butterflies were all in flight.

So, what was it like within the sanctuary?  There were monarchs fluttering all over; it was certainly beautiful.  However it did not live up to my expectations.  I expected to see orange clouds of butterflies everywhere.  It was not nearly as awesome as I what I have seen in documentaries.  Trying to take photos of the constantly moving butterflies was quite impossible, but the videos I took might give you some impression of the experience.
Be sure to click on full screen to be able to see the videos better.


I did manage to get a photo of these two monarchs that were mating in the middle of the path.  We had to stop people from stepping on them. 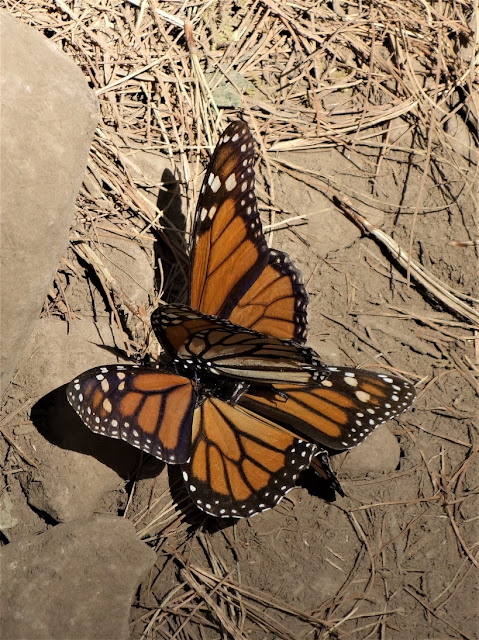 I also saw these butterfly wings on a rock.  When birds eat the monarchs they spit out the wings because they are toxic. 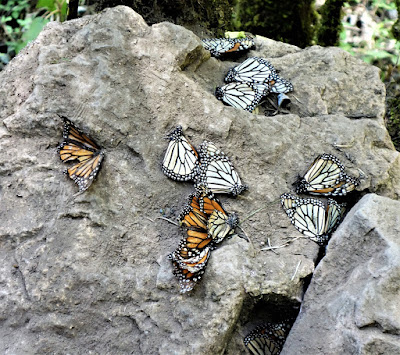 The population of monarchs is in decline, and I wonder if that is why I found the number of butterflies somewhat disappointing.  I have also heard that the other reserves are better although less accessible.

At one point a major concern was the destruction of the habitat through illegal logging.  Although that activity still persists, fortunately the Mexican government has brought it under control for the most part.  Currently the greatest danger facing the monarchs is in the U.S. and Canada where the use of herbicides by farmers is eradicating the milkweed which is the butterfly's source of nourishment in the north.

The magical quality of the reserve is largely destroyed by the sheer number of tourists visiting the place.  It wasn't just the numbers but their behavior and disregard for rules that aggravated me.  You are supposed to maintain silence within the sanctuary, but as you heard in the videos, there was little silence.  The "gringos" were just as guilty as the Mexicans.  And I am sorry, but this is not the place for crying babies and toddlers or unruly youngsters.  I must say that I was very proud of Ezra's comportment, much better than many of the adults.  You are also supposed to stay on the path, but we saw groups wandering off into the forest.  We even saw one person who had brought his dog, another infraction of the rules.  At least there was not much litter along the trail.  I only saw one discarded pop bottle thrown by some ignorant pig.

I am still glad to have had the opportunity to visit the reserve.  However, if you are planning to come to Mexico to see the monarchs, I would suggest that you visit the reserve on a weekday when there are surely fewer visitors.  Or, if you are have the physical stamina, visit one of the more remote sanctuaries.

By the way, I mentioned that the weather was warmer than normal, even at that high elevation.  I have frequently written that Mexico City's climate is cooler than most northerners expect.  The last few days, however, Mexico City has been having a heat wave.  As I write this, the temperature is 86 degrees Fahrenheit.  Yesterday and today the city government issued a heat advisory.  For us back in Ohio, 86 degrees would be a nice summery day, but here the locals, unused to the heat, are broiling.