Our tour on Saturday did not end with the butterfly sanctuary.  From there we continued on to the nearby town of Valle de Bravo.

Alejandro and I took a day trip to Valle de Bravo about five years ago.  The town is situated on the shore of Lake Avándaro, a reservoir that was created with the construction of a series of dams between 1938 and 1947.  It has become a popular lakeside resort, and wealthy Mexico City and Toluca families have built weekend homes there.  On the hill above the reservoir the picturesque old town earned Valle de Bravo the designation of "Pueblo Mágico" (Magic Town) from the Secretariat of Tourism.  Alejandro and I found the place to be delightful... one of our favorite "Pueblos Mágicos"

This time, however, we found Valle de Bravo less than magical.  It was more like a nightmare.

Before we reached Valle de Bravo, our bus made a stop a Avándaro, a swanky development on the other side of the lake, to see Cascada Velo de Novia (Bridal Veil Falls).  We had forty minutes, which was just enough time to walk down to the falls, snap a photo at the crowded observation deck, and walk back to the bus.  The falls are pretty, but are no big deal.  We have more impressive waterfalls in Ohio.  But it seems to be a big tourist stop, and the parking lot was full of tour buses. 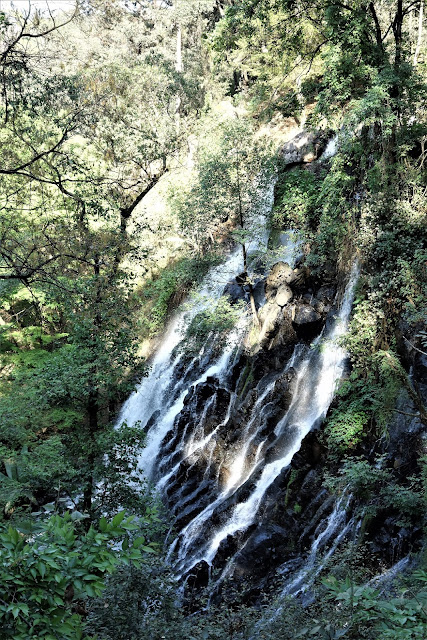 We then drove to Valle de Bravo.  What should have been a short drive of about four miles was a forty five minute journey.  Most of that time was spent in gridlock on the town's narrow streets which were clogged with insane weekend traffic.  I never thought I would see a place that made Mexico City's congestion look good.  After crawling through town at a snail's pace we were finally let off the bus near the lakefront at 5:00 P.M.  We were given an hour and a half to have dinner.  The tour operator suggested that we eat at one of the floating restaurants at the dock.  We, however, wanted to eat at the restaurant where we ate on our previous visit, a place called La Michoacana, only seven minutes away on foot, But that walk is all uphill.  We considered taking a taxi because of Alejandro's father, but that would have taken forever.   So we trudged up the hill.

The restaurant probably has the best view in town.  To one side are vistas of the lake below. 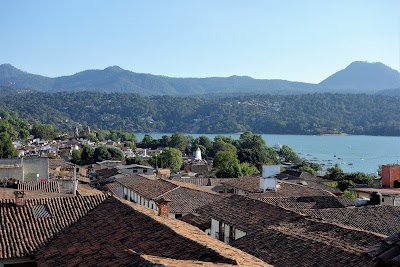 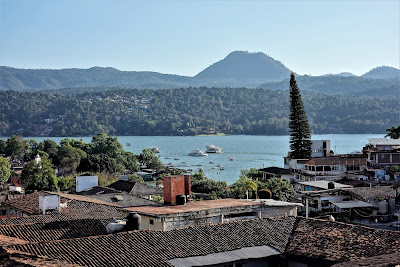 In the other direction is a view of the towers of the main church in the center of the colonial town. 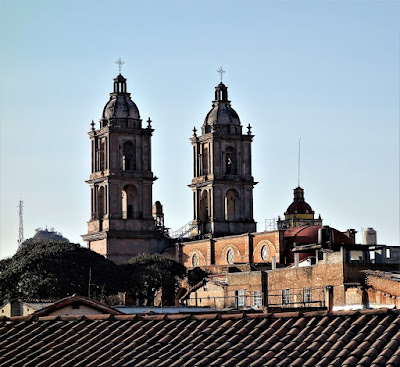 The restaurant is still a beautiful place, but for some reason the service was dreadful this time, even though the place was not that crowded.  We waited over a half hour for our meals.  It was after 6:00, and we were supposed to return to our bus by 6:30.  We rushed through our meals, and made it to our meeting place at 6:40.

There was no need to have rushed.  Our meeting place was a plaza on the lakefront where all of the tour buses come to pick up their passengers.  There were hundreds of tourists, including our group, waiting there.  Crawling through the traffic, one tour bus after another pulled up.  We kept looking for our bus, and it did not arrive until 7:30. 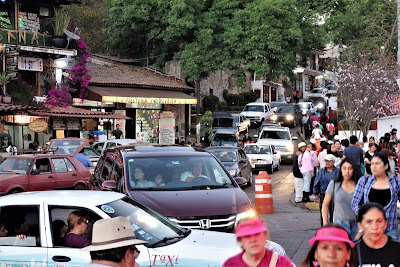 Look at all that traffic!  This is what is was like for the entire fifty minutes that we waited.
Not very magical, is it?

So what has happened to Valle de Bravo in the intervening five years since our last visit?  Our previous trip here was on a Saturday also.  The place was busy and there was traffic, but there was no insane gridlock.  I suspect that the culprit is the explosion of tourism to the nearby butterfly sanctuary.  Probably every tour group and even individuals traveling on their own by car head to Valle de Bravo for dinner after seeing the butterflies.  The result is chaos.  Perhaps after the butterflies head north, the town will return to a level of normalcy.  But if this is the new normal... if this is what Valle de Bravo is like every weekend... I will cross it off my list of magical places in Mexico and count it as another place destroyed by mass tourism.
Posted by Retired Teacher at 10:37:00 PM