Two Museums to End My Stay in Oslo

Today was the final day of my trip.  Yesterday I checked off two of the places I wanted to see in Oslo... the City Hall and the Vigeland Sculpture Park.  My goal today was to visit two of Oslo's most interesting museums.  To do that I needed to take a ferry boat across the harbor to the leafy suburb of Bygdoy where a number of the city's museums are located.

When I took the ferry at around 10 A.M. the weather was overcast.  Below is a view of Aker Brygge, the site of the old shipyard which has been developed into a neighborhood of upscale apartments, yacht clubs, and trendy restaurants. 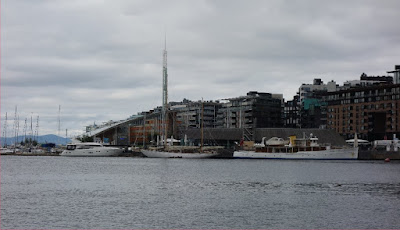 The short ferry ride took me across the harbor, and from there it was a short walk to my first museum... the Viking Ship Museum.  Here are the remains of three Viking ships, two of them still in excellent condition.  The Vikings would bury their nobles in their ships, and in the case of these two, the vessels and their contents were preserved under the clay soil of the burial mound.

On the first ship, the "Oseberg", an important noblewomen was buried in the 9th century.  This boat was beautifully decorated with carved wood.  It was a pleasure craft and was not meant to be sailed on the open sea. 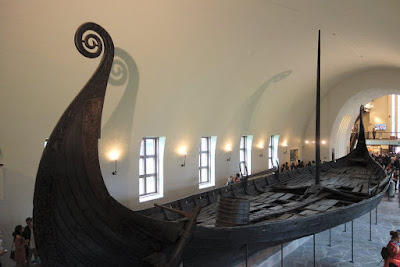 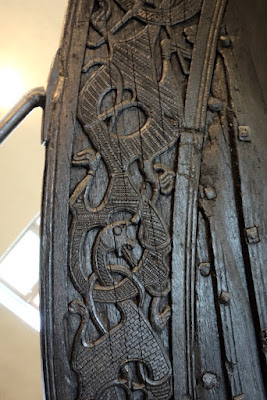 The second ship contained the remains of a chieftain who died in the 10th century.  This ship is larger and sturdier, and would be the kind of vessel in which the Vikings made their epic voyages of exploration. 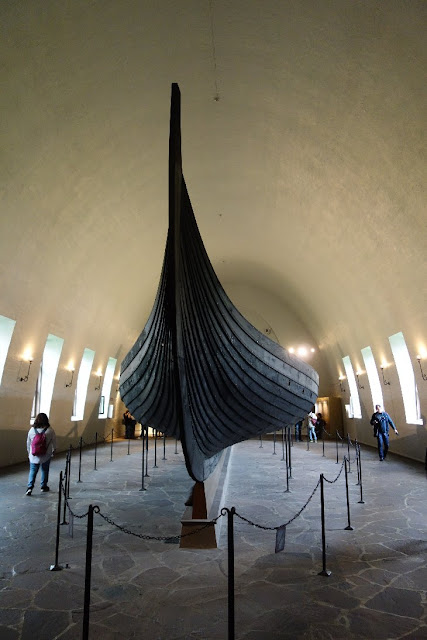 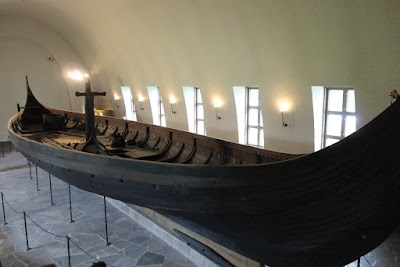 The museum also displays many of the objects found on the ships.  Like the Egyptians, the Viking nobles were buried with goods to be used in the afterlife.  The burial mounds were plundered centuries ago, so no jewelry or precious metals were found.  However a wide variety of household goods were found. 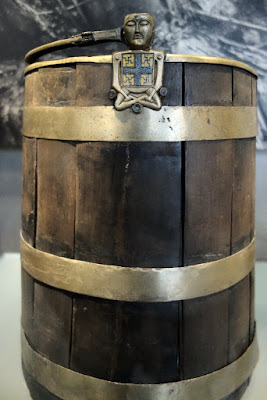 A wood and brass bucket that probably came from a trading (or raiding) expedition to Ireland. 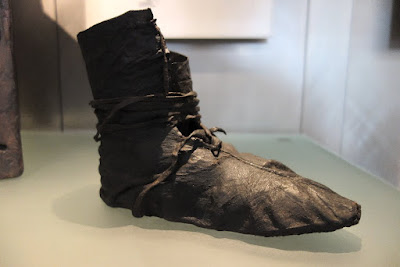 By the time I left the ship museum, the sun was shining... a good thing since my next stop was an outdoor museum, the Norwegian Folk Museum.  Here around 150 buildings have been moved to give a glimpse of life in different parts of the country over the last 800 years.

The "Old Town" contains buildings from different neighborhoods of Oslo. 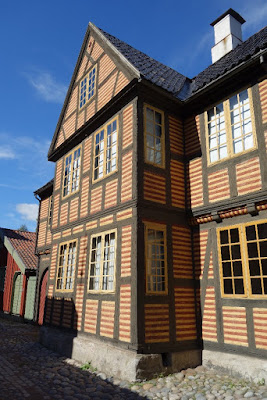 When I walked into an early 20th century grocery store, there was a "shopkeeper" as well as a couple of  "customers". 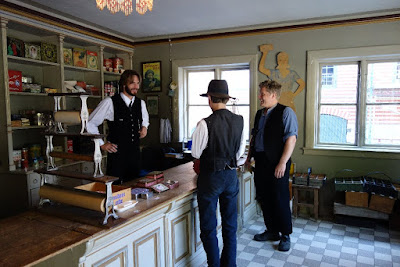 While central Oslo was build of bricks, the poor people lived in wooden houses in the outlying districts.  The tile roofs were designed so that snow would slide off and not collapse the houses under its weight. 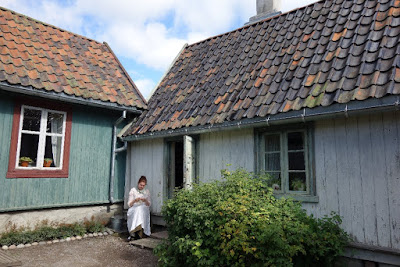 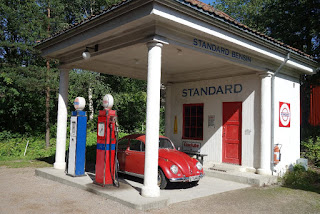 A very interesting display is in this mid-nineteenth century apartment building. 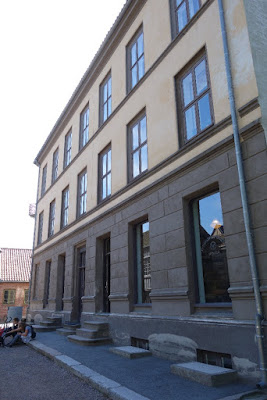 Apartments have been furnished to reflect life in different eras from the 1860s to the 1970s. 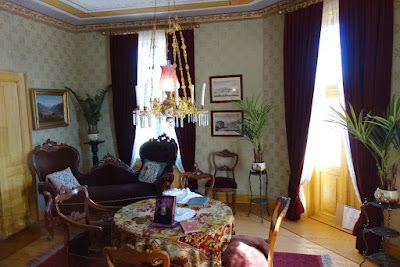 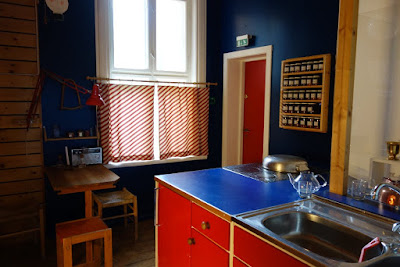 There are many farm buildings from different regions of rural Norway.  Storage buildings were usually elevated off the ground to protect the harvest. 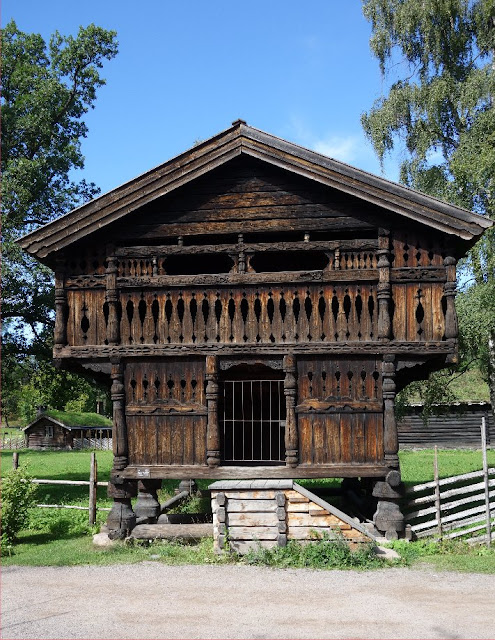 Prosperous farmers often had a guest house for visitors.  This farmer from the Telemark region must have been quite well-to-do since the entire interior of the guest house is painted with rustic designs. 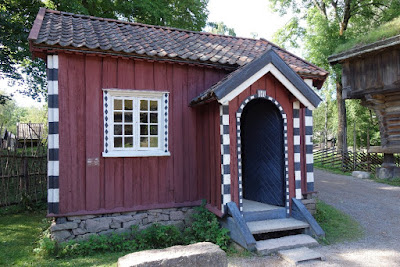 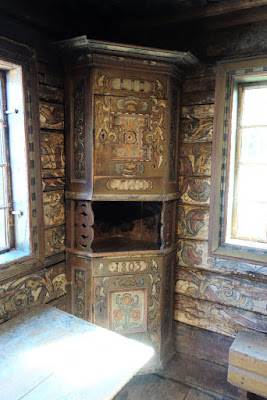 The oldest structure on the museum grounds is a stave church that was built in 1212.  It was carefully disassembled and reconstructed here. 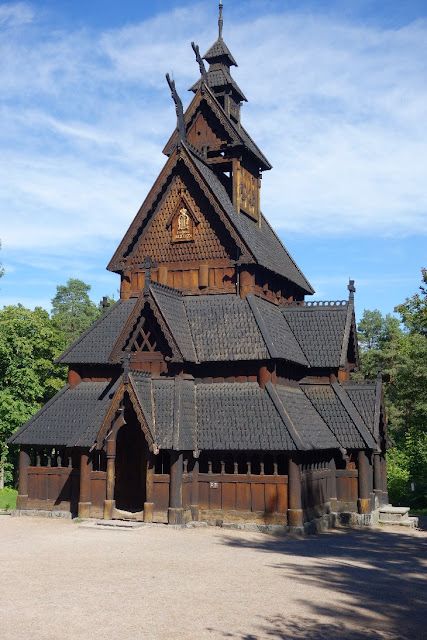 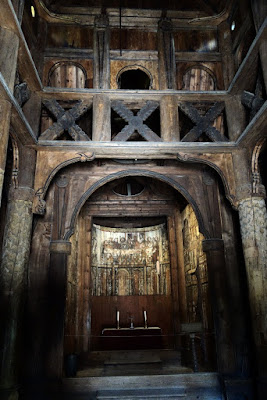 In the late afternoon I took the ferry back to the dock near the City Hall. 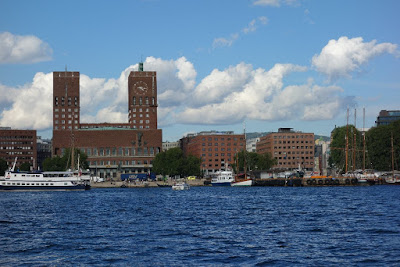 My Norwegian adventure has come to an end.  It is now time for me to pack my bags in preparation for tomorrow's long journey home.