My Last Day in Bergen

Yesterday morning I left Balestrand on the passenger boat, and by noon I was back in Bergen.  The sun was actually out when the boat entered the harbor! 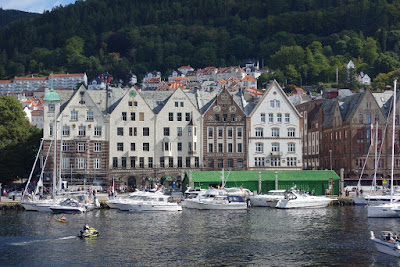 A rare view of Bergen in the sun!

But true to form, within a couple hours the sky clouded over, and later in the day it rained.
After I got settled into my hotel, I met my cousin Hans Peter downtown.  We took a bus to an outdoor museum called Gamle Bergen (Old Bergen).  A number of old houses and shops have been gathered together here to recreate life in Bergen in the 19th century and early 20th century.  The homes have period furnishings, and the stores and workshops have merchandise and equipment from the era.  In some buildings museum employees play the part of residents of that time.  For example, in one store, the "shopkeeper" told us about the new product that had just arrived from America... Coca Cola! 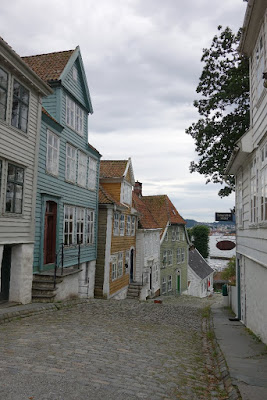 After our visit to the museum, we went to what is probably the city's most popular tourist attraction...the funicular train which climbs 1000 feet to the top of Mount Floyen. 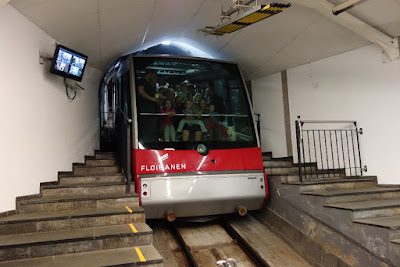 We had put this off when I was previously in Bergen because the weather was bad, and the mountaintop was often shrouded in clouds.  Today's weather was not perfect, (there were a few sprinkles of rain while we were at the top), but we had a clear view of the entire city. 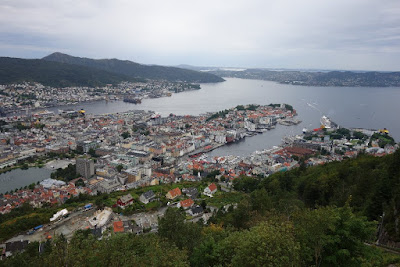 And of course it was necessary that we take each others picture while at the top. 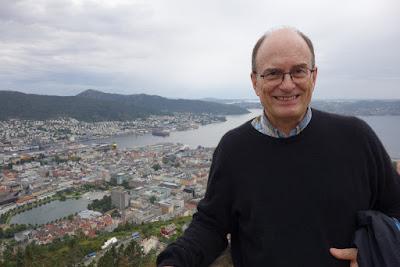 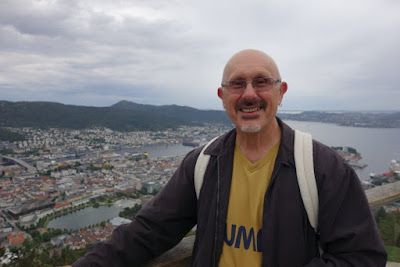 We walked down the mountain... good exercise since I knew that I would be eating too much once I was at Hans Peter's house.

As before, I was enveloped by warmth and hospitality at the home of Hans Peter and his family.  A bottle of wine was opened before dinner, and another during dinner.  I'm really not used to drinking much wine, so by the end of the evening I was a little bit light-headed. 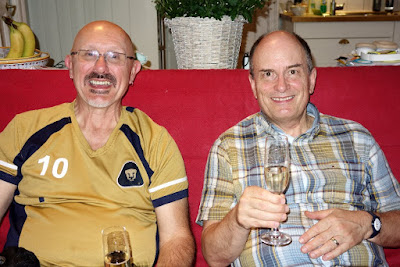 "I hope I can make it back to my hotel at the end of the evening!"

Hans Peter was going to prepare a very traditional Swiss dish called "rosti".  It is very much like our hash browns.  It consists of shredded potatoes, fried in butter and oil, and served like a round fritter.

Sophia and Alexander were put to work peeling the potatoes. 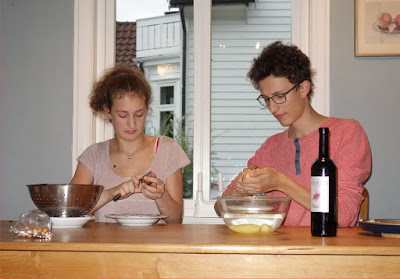 Hans Peter had never made "rosti" before, but it came out perfectly. 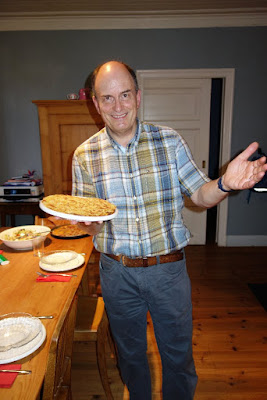 Meanwhile, Larissa was making a dish typical of Zurich... strips of beef with onions and mushrooms with a creamy gravy.  (The gravy was really good ladled over the "rosti". 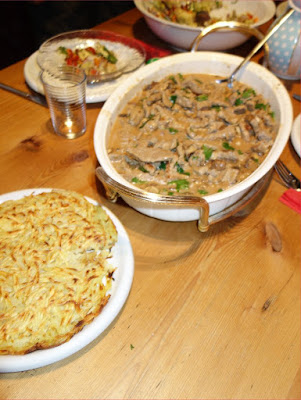 It was another great meal of traditional Swiss food.

We sat and talked until after midnight.  I hated to leave, but I had to get back to the hotel.  After many hugs and promises to see each other again, I said farewell to my Swiss family in Norway.
Posted by Retired Teacher at 3:25:00 PM