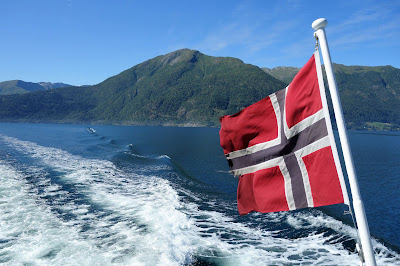 My recent trip was the first time that I had ever been to Norway.  Here are some observations about my journey there.

Norway is a wonderful country.  There were only two drawbacks to my visit there... the weather and the expense.

The weather really was actually a drawback in only one place, the city of Bergen.  Because it is located on the coast and is surrounded by mountains, the clouds and rain from the Atlantic stall over Bergen and are unable to move on.  Perhaps I was lucky, but everywhere else the weather was not a problem.  Heading inland up the fjords, foul weather from the Atlantic is not a constant condition.  Of the six days that I spent in the fjord country, I experienced no rain, and only had a day and a half of cloudy weather.  I had plenty of sunshine to experience the beautiful scenery.  During the two days that I spent in Oslo, the weather was variable with periods of clouds, brief showers and sun.  It seemed that the weather gods were smiling on me, because every time I was doing outdoor sightseeing, the sun would come out.

There is no doubt that Norway is an expensive country... certainly a big change from Mexico where the current exchange rate makes travel extremely affordable.  Still, Norway was not quite as bad as I had feared.

My most expensive hotel was in Bergen where a small room in a nice hotel cost $157 US per night.  However the price included a breakfast buffet.  I made sure that I had a hearty breakfast each morning, and generally did not need to eat again until the evening.

My hotel in Balastrand on the Sognefjord was a bargain.  A very clean, spacious room in a small, family-run hotel overlooking the fjord cost only $104 per night.  It too included a nice breakfast buffet.

My modern, well-located hotel in Oslo cost $112 per night.  Although it did not include breakfast, that was not a bad price for any European capital.

Food is also expensive.  A light meal of a sandwich, pastry and beverage would generally cost more than $20.  The "smorgasbord" at the ritzy hotel in Balestrand cost $70 with a glass of wine.  On my last night in Oslo I splurged and went to a nice restaurant where reindeer steak with potatoes and vegetables, dessert and iced tea cost $59.  However, at my favorite restaurant in Balastrand, a delicious meal was not exorbitant.

Public transportation is not cheap either.  A single ticket on a city tram or bus cost around $4.  The passenger boat from Bergen to Balestrand, a four hour trip, cost me $71.

Norway is a beautiful country with scenery that rivals Switzerland.  I did not see all the "must see" sights, but I am glad I planned the trip the way I did.  My three days in Balestrand, a village on the Sognefjord, gave me a chance to experience the beauty of the fjords in a relaxing manner and without being with huge crowds of tourists.

Oslo is a very pleasant city which is definitely worth a stay of at least two days.  Norway is a very prosperous and egalitarian society, so I was very surprised by the number of beggars in the capital.  Some of them are probably drug addicts or alcoholics, but the majority of the beggars were gypsy women.  I have read that they can be very aggressive, but they never bothered me.  In Oslo, as in the rest of the country, I felt perfectly safe at all times.

The people of Norway are extremely friendly, and they are all fluent in English.  I had a number of conversations with Norwegians on the street, and they were very cheerful and helpful.

I do hope to be able to return to this marvelous country someday.