Yesterday Peter and Brigitta took me to Zurich airport for my 11:00 A.M. flight on Scandinavian Airlines to Oslo, Norway. 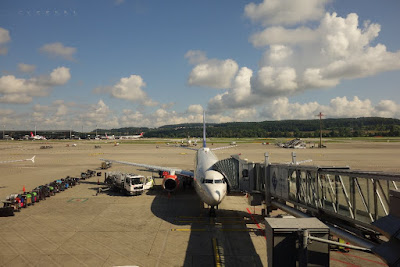 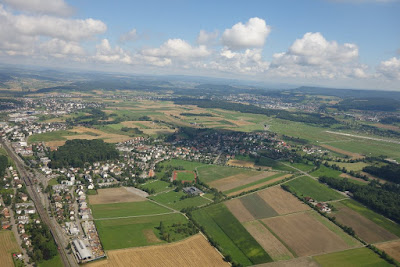 Taking off from Zurich 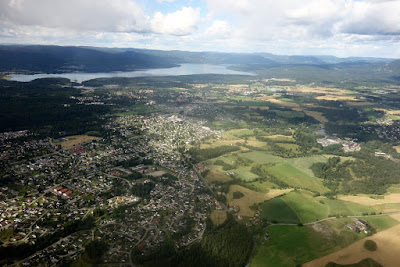 Approaching Oslo
It was a two and a half hour flight to Oslo. I had a three hour layover there.  I had to pick up my checked suitcase, go through customs (there was no inspection at all... not even a stamp in my passport), and then recheck my suitcase and go back through security.  I still had time to hit the ATM (called a Mini-Bank here) for some Norwegian krones, and to grab a lunch at one of the fast food counters in the terminal.  Welcome to Norway, where food prices are just as exorbitant as in Switzerland.  I paid $10 for two wieners and two little scoops of mashed potatoes.  (The potatoes were served with some sort of spicy relish.)

At around 4:00 I boarded my flight to Bergen.  The flight is less than an hour, and soon I could see the Atlantic coastline of Norway which is deeply indented with fjords. 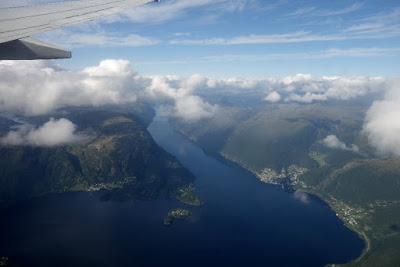 After a $50 taxi ride from the airport, I arrived at my hotel, Hotel Park Bergen. 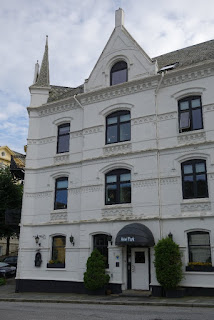 The building is quite charming.  It was once the mansion of a wealthy Norwegian who was a close friend of the famous composer Edvard Grieg.  The rooms, however, are minuscule.  This is common for budget hotels in Europe (if you can call $150 per night "budget"). 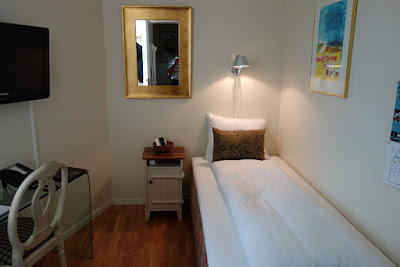 I am standing in the bathroom in order to take this photo, and my suitcases are piled behind the bathroom door.

At least the price of the room includes breakfast.  They serve a pretty good breakfast buffet.  I filled up on that this morning (although I skipped some of the items such as smoked trout).  The travel guides tell you to make breakfast your biggest meal since restaurant prices are outrageous.

Yesterday when I arrived here it was partly sunny.  However this morning we are back to typical Bergen weather... gray skies and rain.  Well, I guess that I should put on my rain poncho and start exploring the city.
Posted by Retired Teacher at 3:03:00 AM