Usually on a Saturday night, Alejandro and I go out for dinner.  But today Alejandro was at the hospital with his mother, and I was alone in my apartment trying to get over the sniffles.  After spending the afternoon dozing and reading, I got dressed to go out and eat.  There are a lot of restaurants in my neighborhood, but the area is not noted for its fine dining.  A lot of the restaurants are U.S. or Mexican chains.  There was one restaurant a short walk from the condo that Alejandro and I have noticed on previous visits, and we have said that we should try it some time.  It is an Italian restaurant called "La Posta".  I decided to go there this evening.

When I arrived around 6:00 P.M. the restaurant was not crowded, and, by the time I finished my meal, I was the only one there.  The afternoon dinner crowd had left by then, and the nighttime supper crowd had not yet arrived. 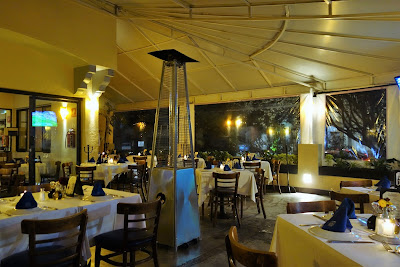 I started with a very good soup of roasted tomatoes, green olives and goat cheese. 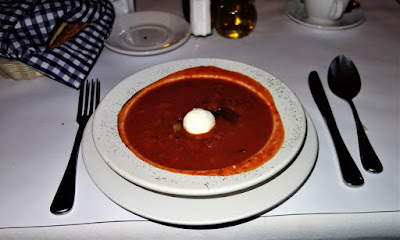 For my main course I had something that was a mixture of cuisines... fettucine Stroganoff. 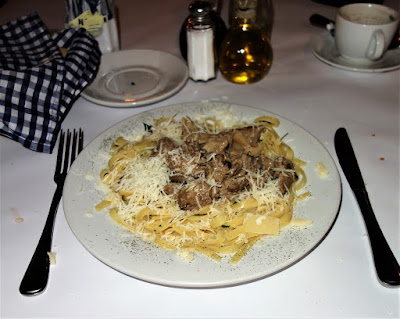 It was tasty, although the beef tips were rather chewy.

For dessert I had panna cotta.  I had heard of it before but had never tasted it.  I had it in my mind that it was made with bread since the Italian word for bread is "pane".  In fact it is sort of an Italian version of flan.  This panna cotta was flavored with strawberries and amaretto and was very good. 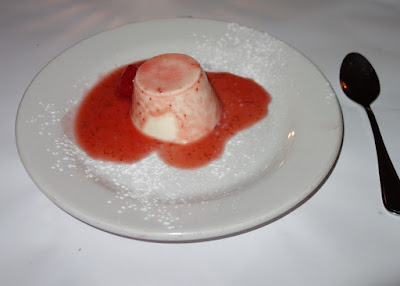 My meal was somewhat on the expensive side by Mexican standards... 370 pesos or around 19 dollars.  It was a good dinner, although not spectacular.  However, I might take Alejandro here someday to share one of their pizzas.
Posted by Retired Teacher at 9:43:00 PM