A Quick Trip to the Condo 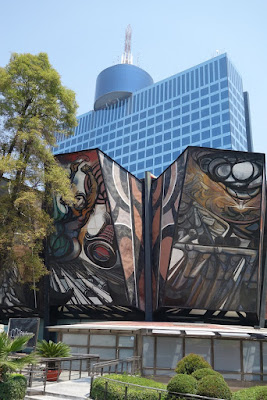 The Mexico City World Trade Center... just a stone's throw from the condo I rent

This morning I was supposed to go to the condo that I am renting.  The cleaning lady was going to be there, and, hopefully we could resolve with the doorman the problem of getting me a key for the front door of the building.  (The lock was changed since I last stayed there.)

I was going to go by Metrobus.  There is a bus line just a couple blocks from Alejandro's house, and from that line I could transfer to the Insurgentes bus that would take me all the way to the World Trade Center.  However, Alejandro's sister was giving him a break today from being at the hospital with their mom, and he said that he could drive me there.

When we arrived at the building, the cleaning lady, Guillermina, was at the front door talking with the doorman.  Nothing was resolved as far as the key issue.  Extra keys have not been made, and those that have been made (Guillermina has one) don't work very well.  One can enter the building easily enough, but trying unlock the door to leave requires a lot of jiggling of the key.   Even the doorman has a hard time with the lock.  We went upstairs to the apartment, where I grabbed the garage door opener.  Until I get a key, I can enter the building through the garage.

Alejandro, good-hearted soul that he is, asked Guillermina if she had eaten breakfast yet.  When she said "no", he invited her to join us.  (We had not yet eaten either.)  So the three of us walked over to the VIPS Restaurant a few blocks away, and had a nice breakfast together.  After saying goodbye to Guillermina, we got in the car and headed back to Alejandro's family's home.

Even though I now have a way to get into the condo, for the time being I will continue to stay with Alejandro's family.  I want to help out as much as I can while Alejandro's mother is in the hospital, so I have taken on the job of cooking for the family.  That consists of (depending on who is taking a turn at the hospital at the time) Alejandro, his father, his sister and his nephew.

On the way home we stopped at Walmart because there were some groceries that I was unable to find at "Comercial Mexicana" yesterday.  I found what I needed, and soon after we got home I started cooking.  I prepared a sort of stew that I often make.  I usually make it with chicken, but a couple days ago Alejandro had bought some "longaniza" (a type of sausage) at the market.  That needed to be used up, so I fried it, and then put it in a kettle with carrots, peas, onions, peppers, and garbanzo beans and simmered it in tomato puree.  I served it over rice.  It was just Alejandro and his dad today, and they both seemed to like their dinner.  So I'm two for two in successfully putting food on the table.