Last November I wrote a post about the many construction projects going on along Mexico City's iconic boulevard, the "Paseo de la Reforma".  Yesterday I took a walk from my apartment to "Reforma" to see how some of the buildings were progressing. 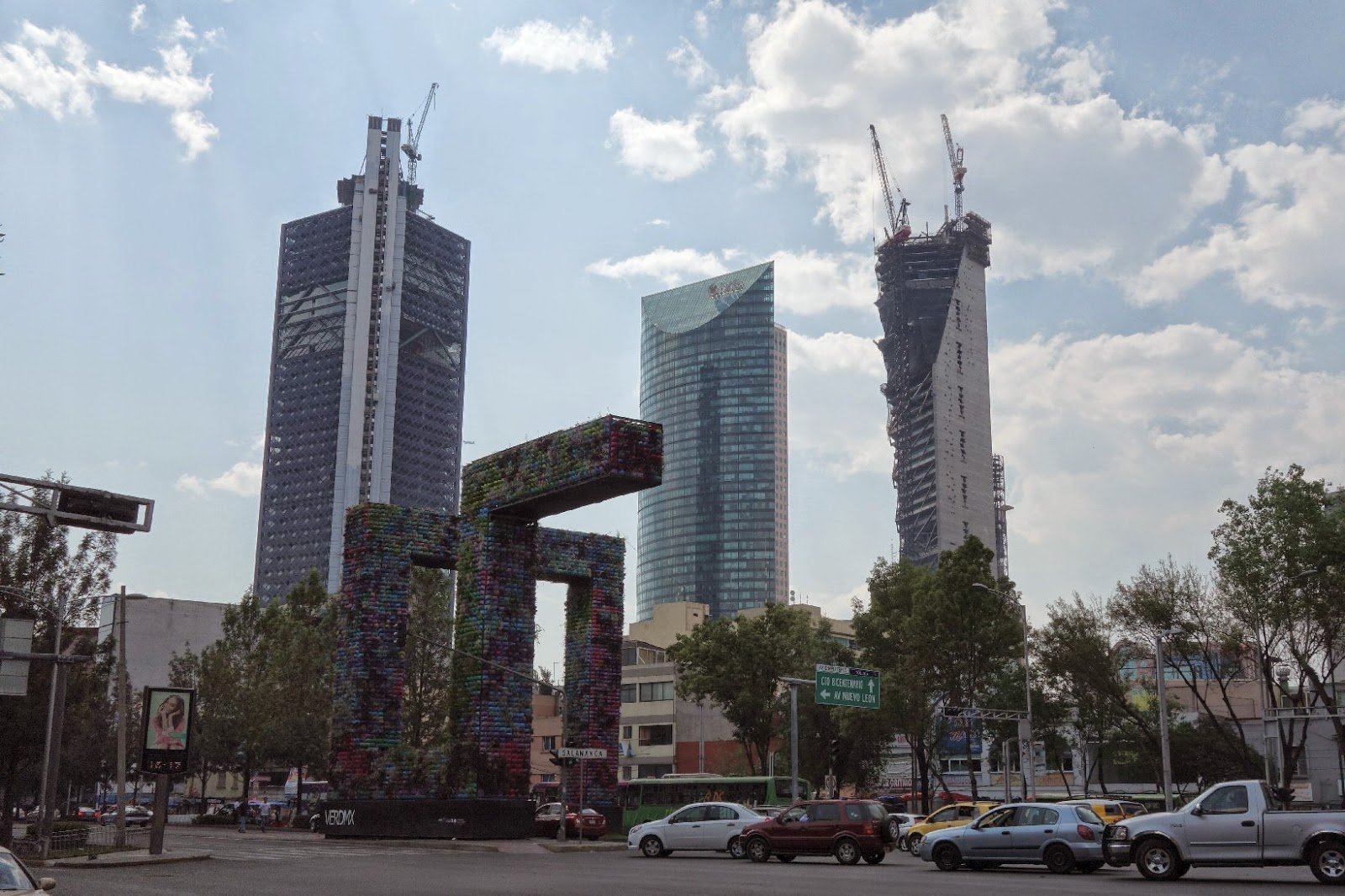 As you can see in this picture, taken from a few blocks away on Chapultepec Avenue, the lower stretch of "Reforma" is dominated by three skyscrapers, two of which are still under construction.


The "Torre Mayor" has held the title of tallest building in Mexico City since its completion in 2003.  In fact, until 2010, it was the tallest building in all of Latin America.  It has 55 stories and is 738 feet tall.  It originally had an observation deck open to the public, but that has been closed.  My friend Alejandro says (and I have not been able verify this story) that the U.S. Embassy obtained office space in the tower for the FBI, and that they insisted that the general public should not be allowed to go up to the top of the tower. 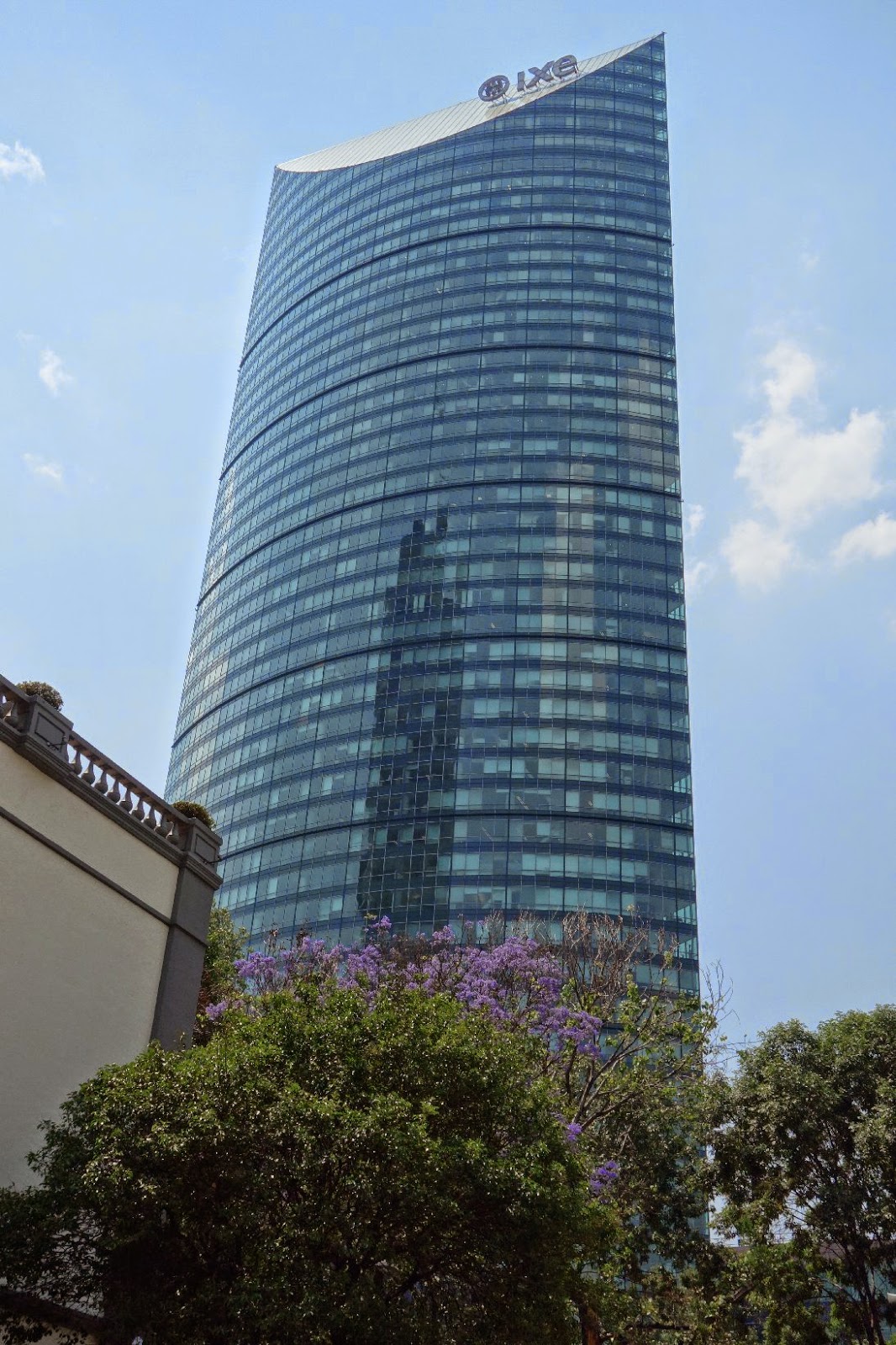 Right across the "Reforma" from the "Torre Mayor" is the rival "Torre BBVA Bancomer".  I have been watching the progress of this building for several years since it is visible from the Condesa neighborhood where I usually stay on my visits to Mexico City.  It was supposed to be completed in 2014, but, although it appears to have attained its full height, it is still not complete.  When I was there yesterday, there was a long line of hardhats returning from their lunch break.  The skyscraper will be the headquarters of Mexico's largest bank.  I have read that it is supposed to be taller than the "Torre Mayor", but I have also read that its height is 738 feet, the same as the "Torre Mayor". 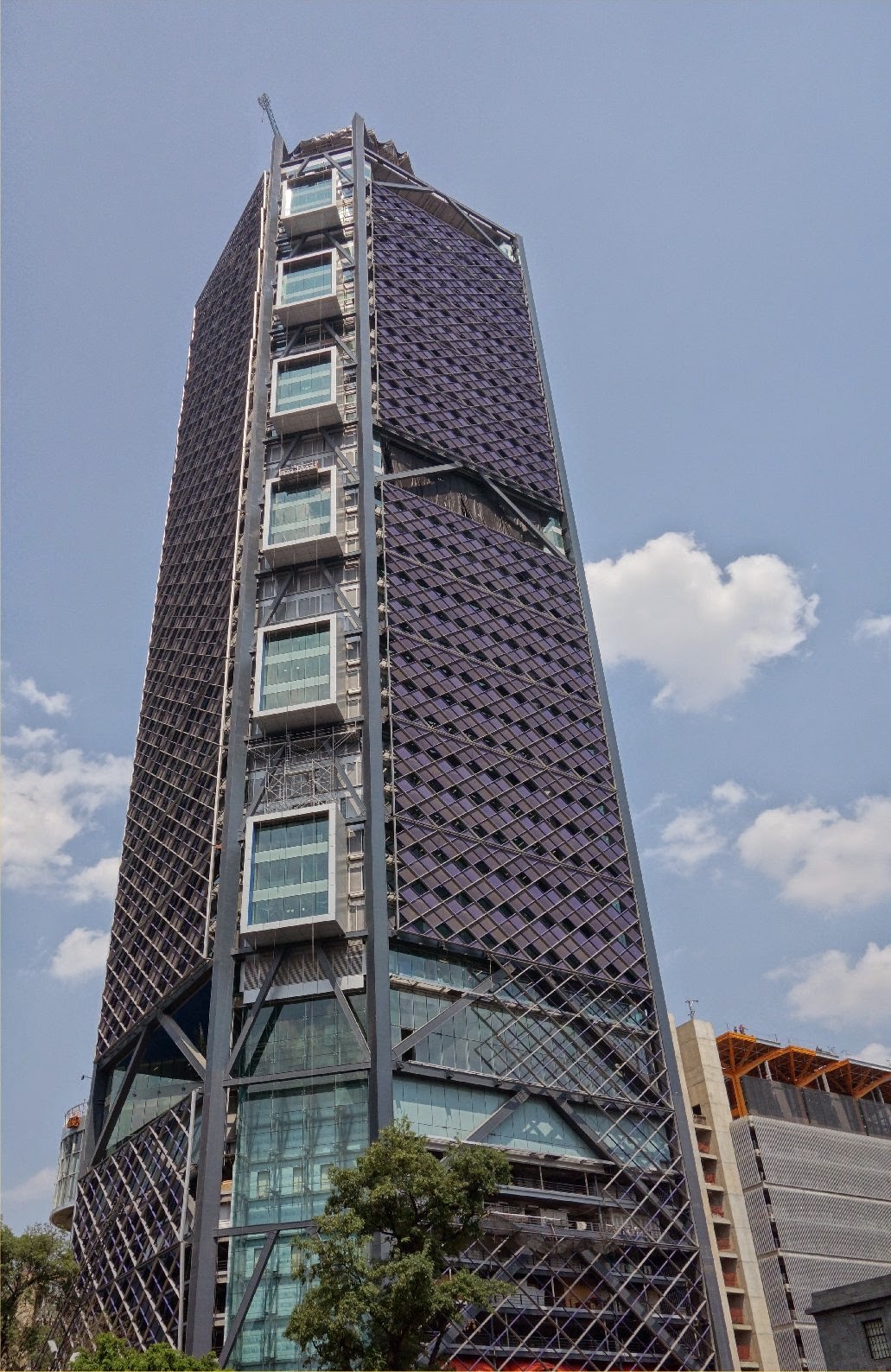 Next door to the "Torre Mayor" is another contender... "Torre Reforma".  This skyscraper has progressed quckly since my last visit.  It appears now to be as tall, or perhaps a tad taller, than the "Torre Mayor".  When completed it will have 57 stories and be 800 feet tall. 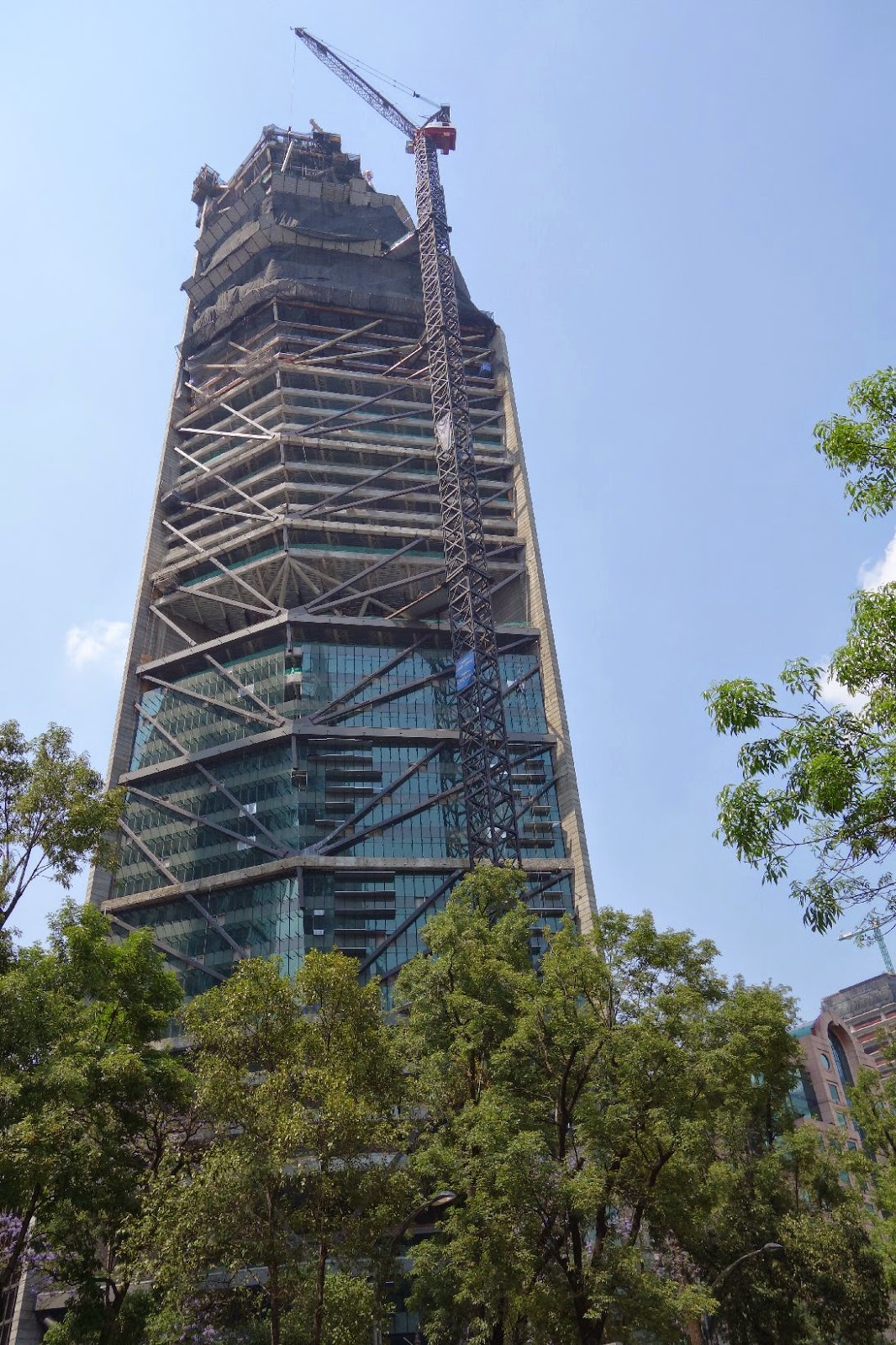 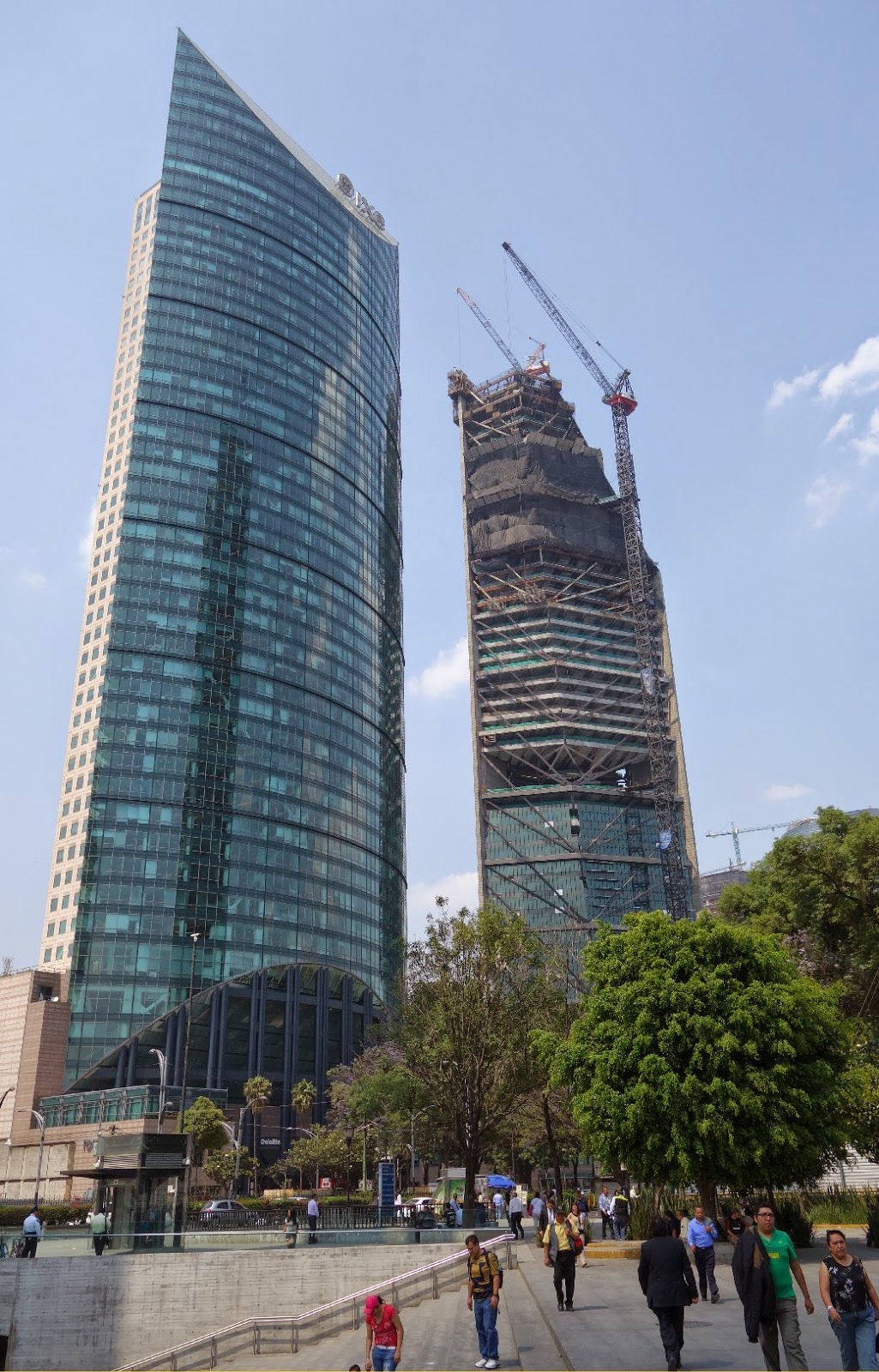 I walked a few blocks behind the two buildings, and from this perspective you can see that the "Torre Reforma" is now as tall as the "Torre Mayor". 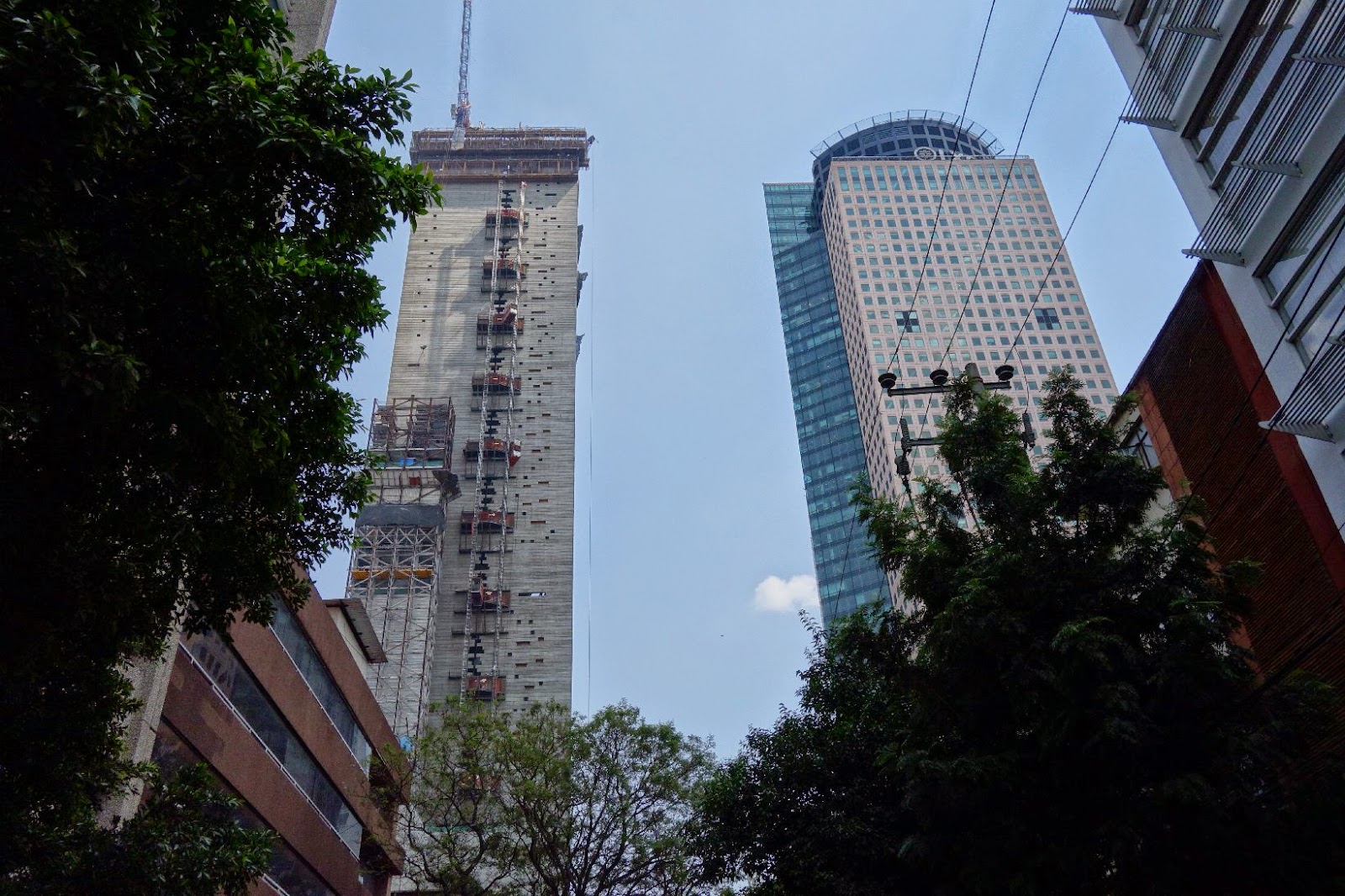 Going up the Paseo de la Reforma a bit, another skyscraper has just about attained its planned height.  The "Torre Diana" is actually a block from "Reforma", but overlooks the boulevard's Diana Fountain.  This building, however, will only be 33 floors high with a height of 518 feet. Before long, however, all of these buildings will move down in ranking.  There are a couple more buildings under construction that will be even taller.  On the city's south side the "Torre Mítikah" will be 60 stories tall with a height of 876 feet.


Artist's conception of the "Torre Mítikah"

However, by the time it is finished, Mexico's tallest skyscraper will not be in Mexico City.  In the city of Monterrey, the "Torre KOI" will, upon completion, be the nation's tallest.
Posted by Retired Teacher at 12:18:00 PM