All Within a Few Blocks

Mexico City's "centro histórico" is the largest historical district of any city in the Americas.  There is a lot of ground to cover if you want to see all its sights.  However, yesterday I went to the "centro" to revisit some places, and I spent the better part of the day without walking more than three blocks.

The first stop on our itinerary is the "Casa de Azulejos" (House of Tiles).  This important example of colonial architecture is located on Madero Street, the pedestrianized street which cuts through the heart of the historic city.  Almost across the street from the House of Tiles is the 20th century skyscraper, the Latin American Tower, which more or less marks the division between the colonial and the modern city.

The House of Tiles was built in 1793 as the home of the wealthy Counts of Orizaba.  The family flaunted its wealth by lavishly decorating the three exposed sides of the mansion with blue and white talavera tiles. 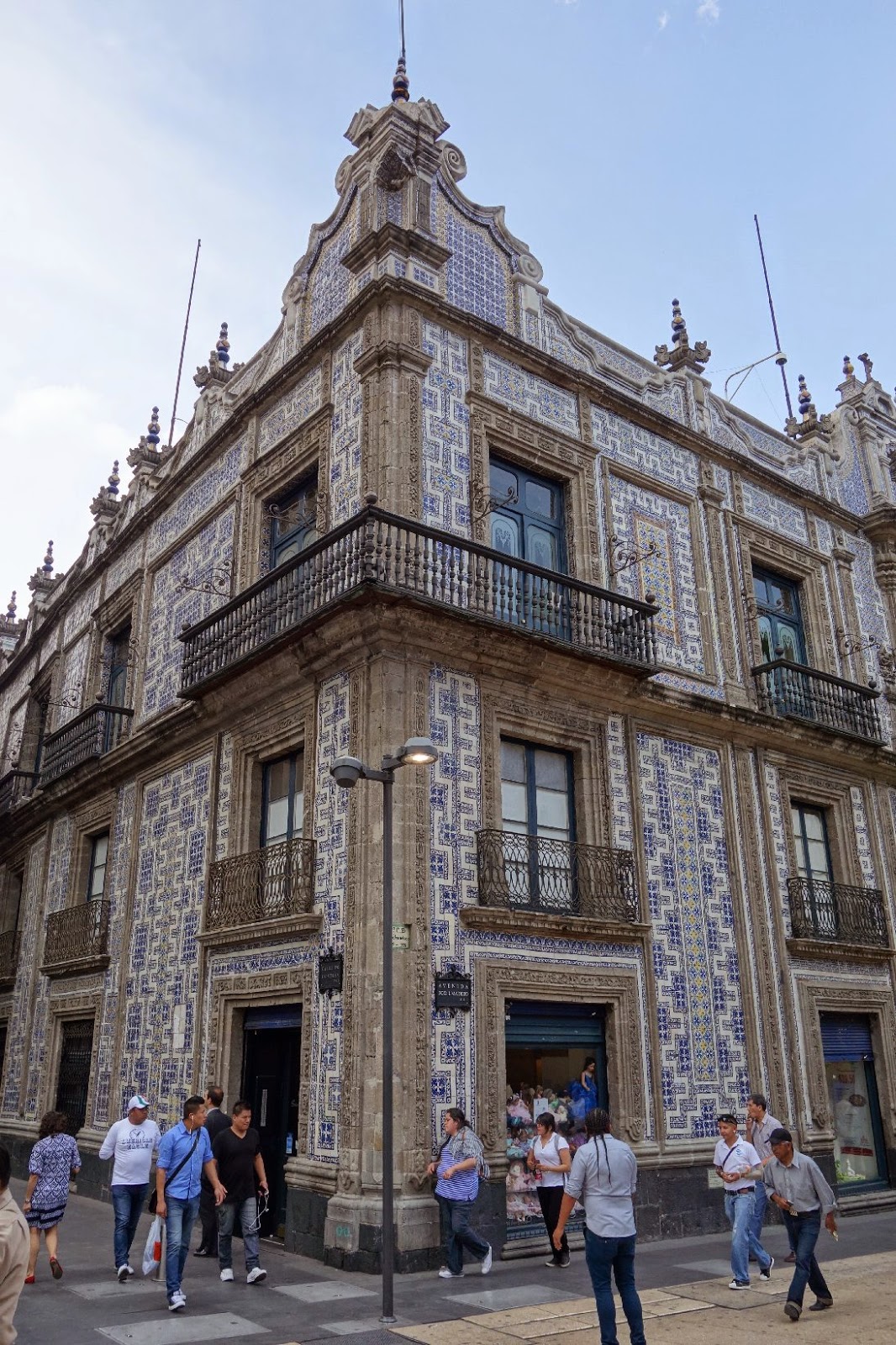 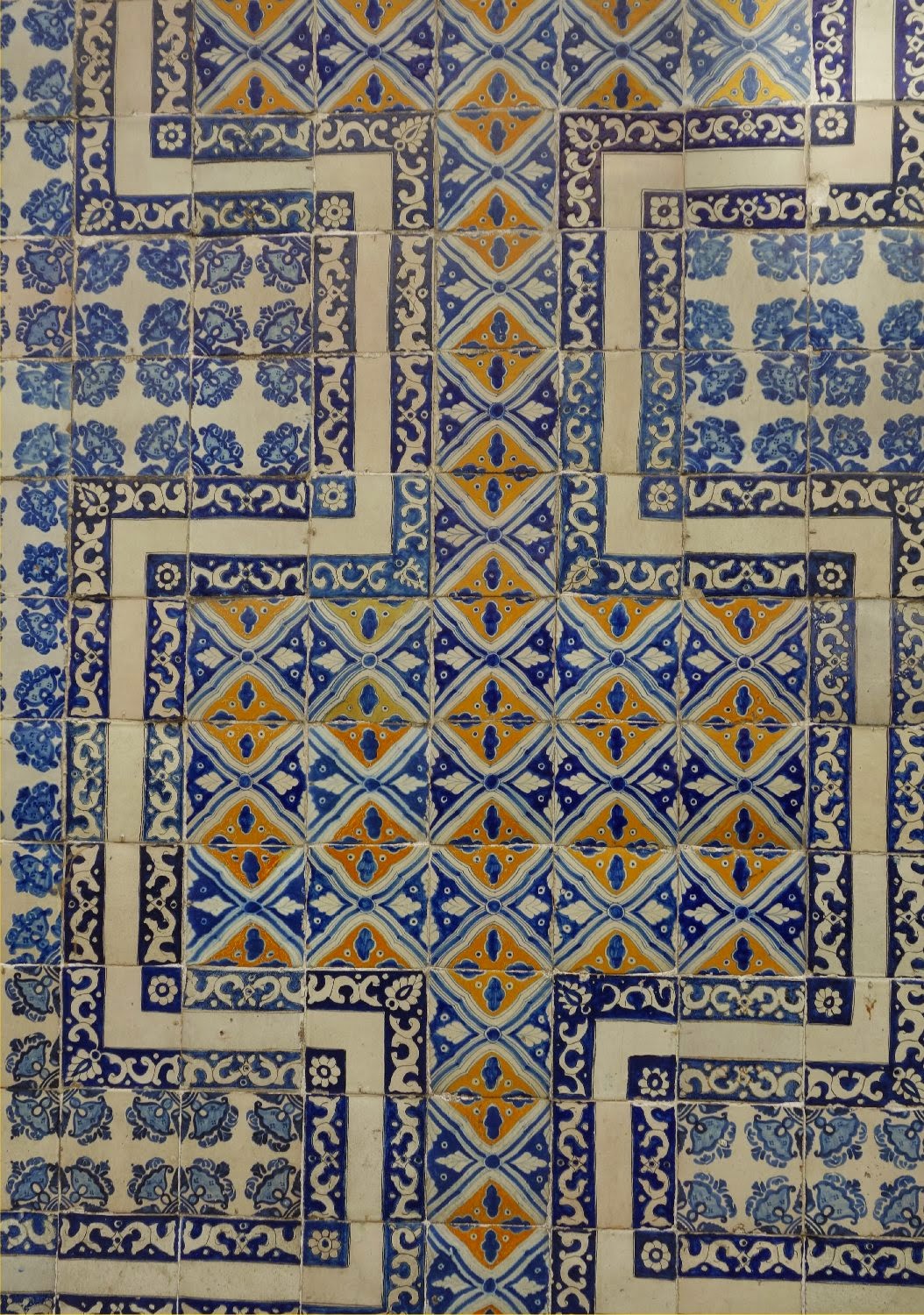 In 1919 the building was purchased by American brothers Frank and Walter Sanborn.  Here they opened a combination restaurant, soda fountain, pharmacy, and gift store.  The House of Tiles is the flagship of the ubiquitous Sanborns chain which is found throughout Mexico today.   The chain was eventually sold to Walgreens, and today is owned by Carlos Slim, the richest man in Mexico (and perhaps the world).

The former courtyard of the mansion was covered with a roof, and is the main dining room. 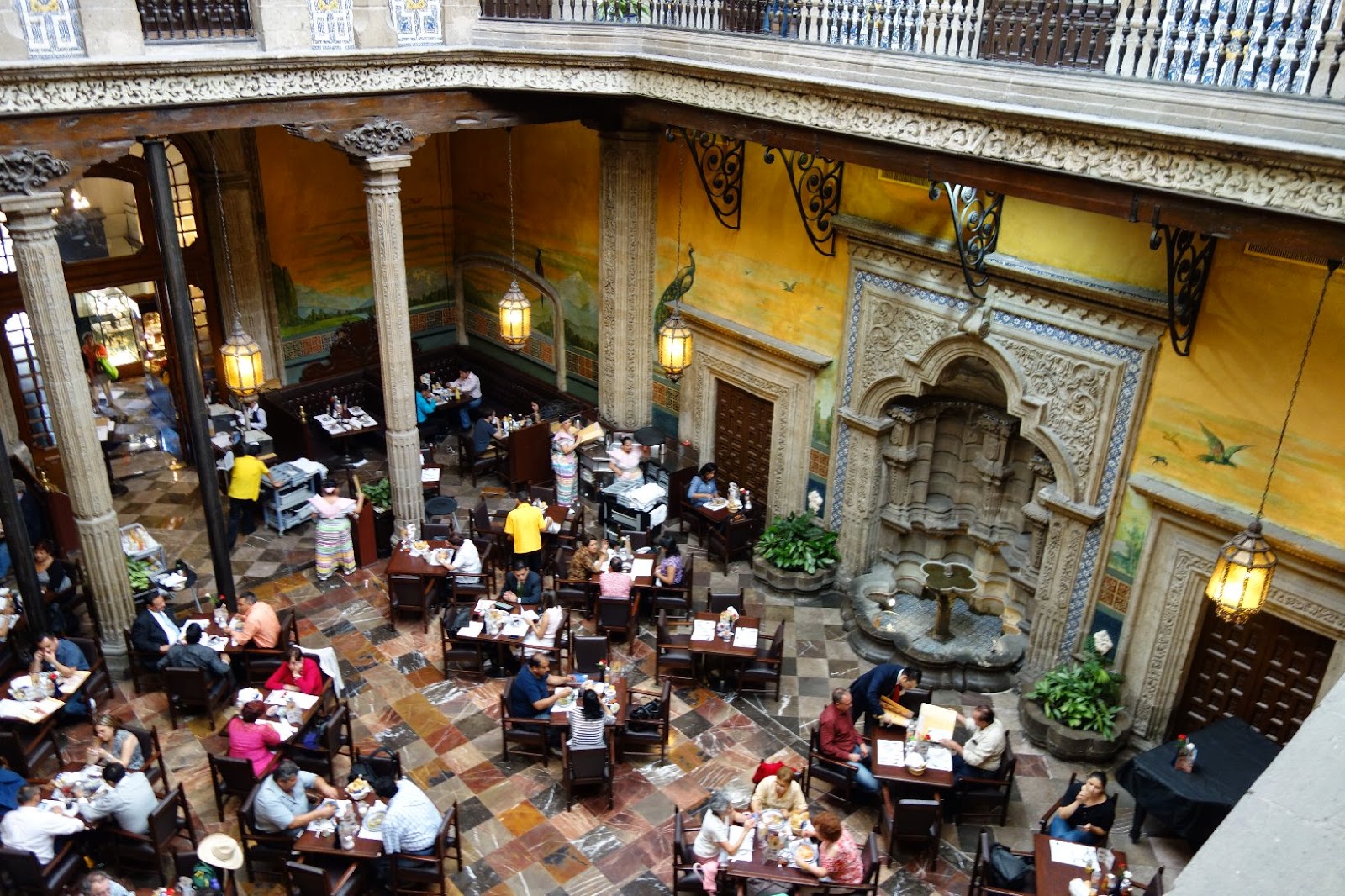 If you are interested in the 20th century Mexican mural painters, be sure to notice the painting at the entrance to the restrooms.  It is an early work (1925) of the great artist José Clemente Orozco. 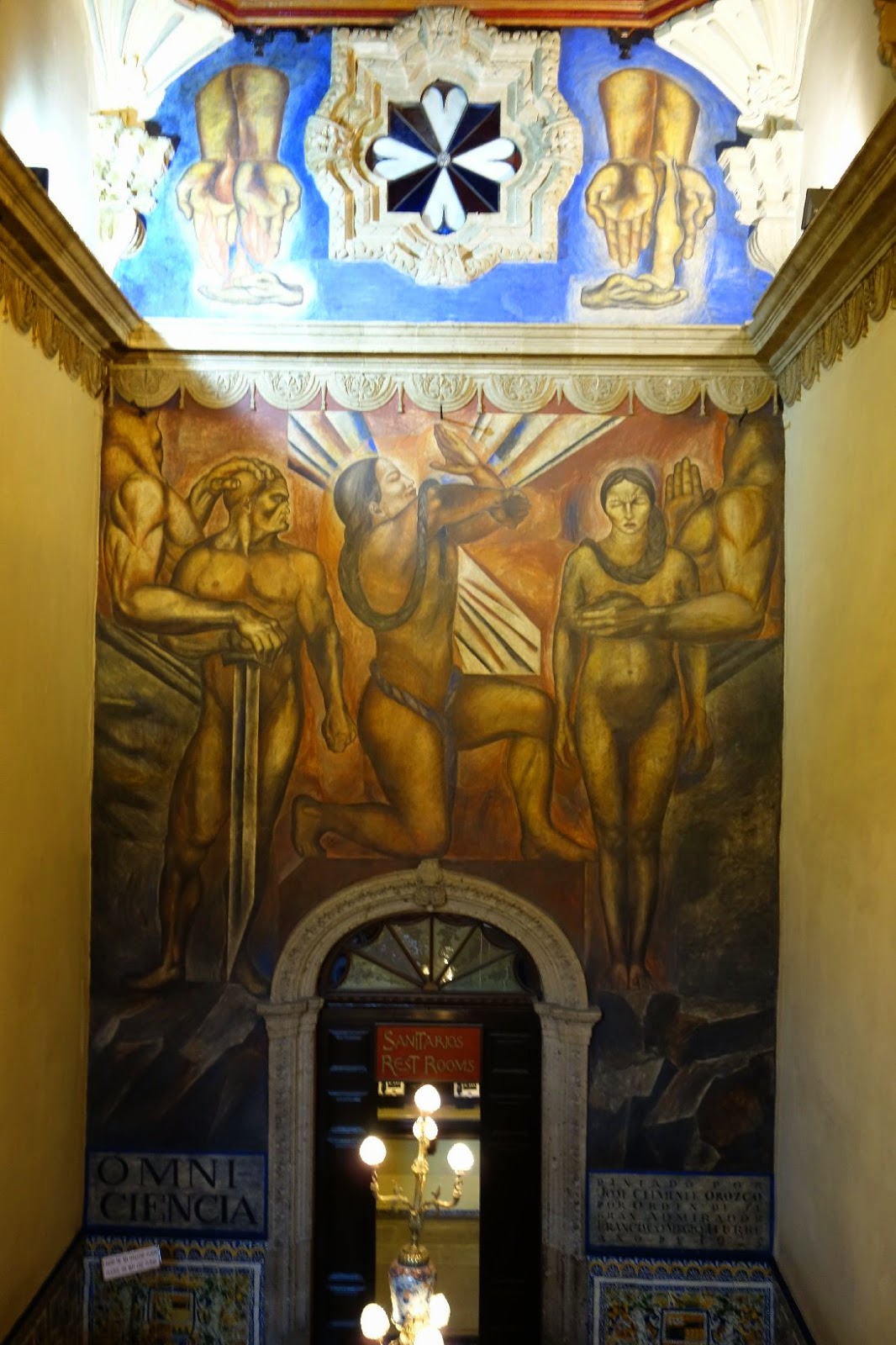 Walking a couple blocks to the north along the side street (also pedestrianized) which runs beside Sanborns, you will come to the "Palacio Postal"... Mexico City's main post office.  The building was opened in 1907, and the architecture is an eclectic mixture of Venetian, Spanish and Elizabethan styles.  It is definitely worth a peek inside to see its lavish interior. 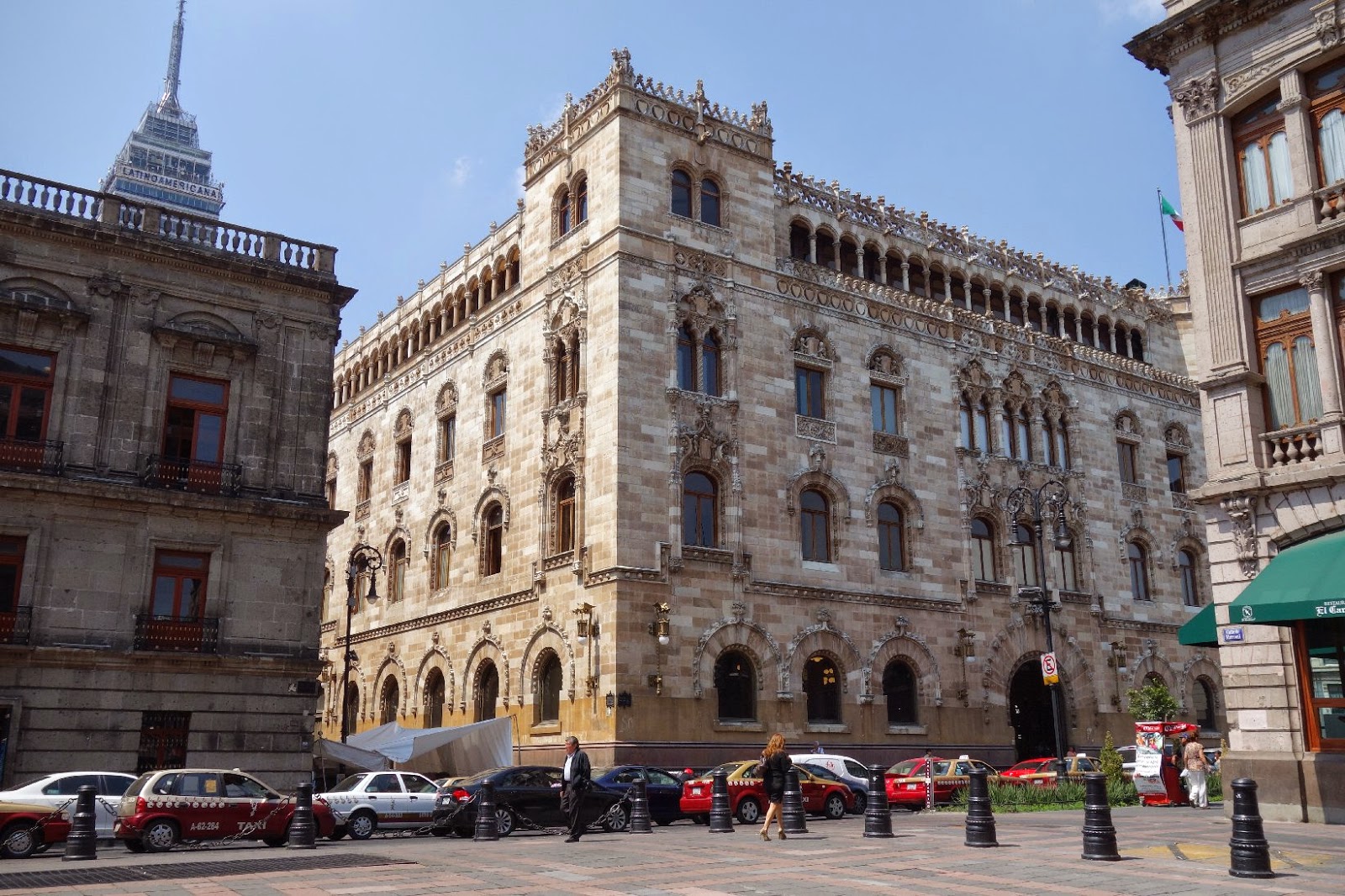 Notice the top of the Latin American Tower peaking above. 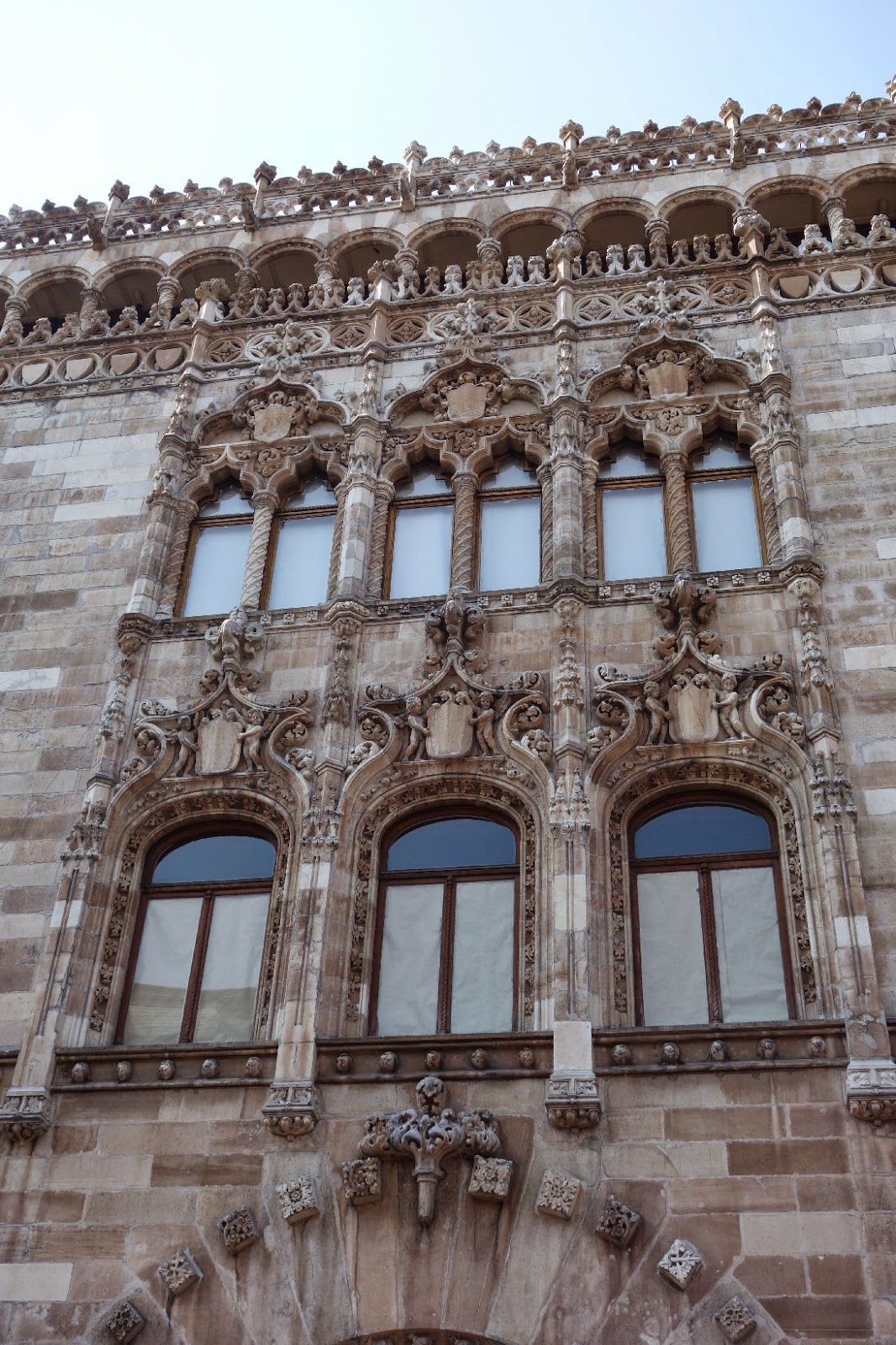 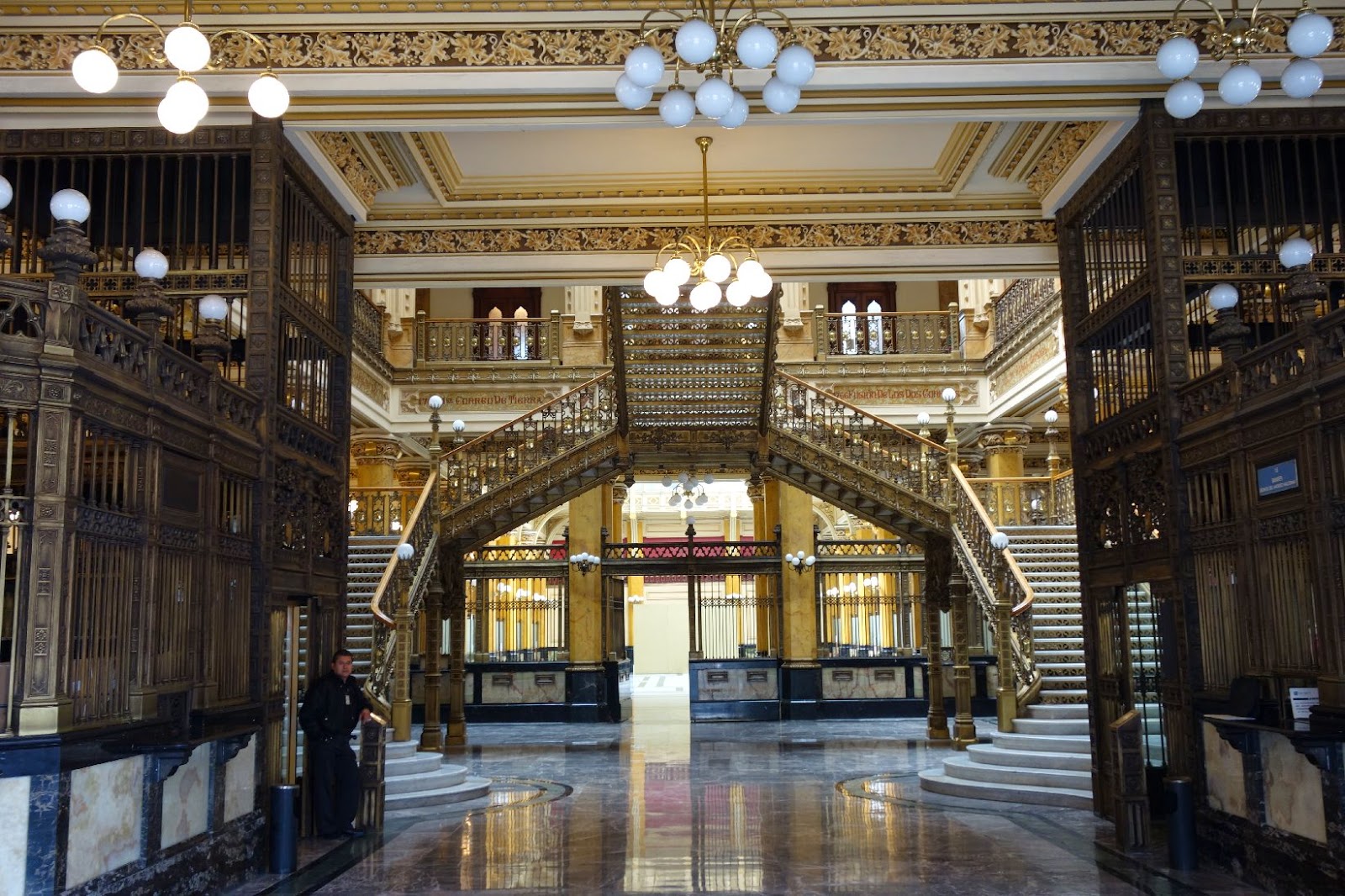 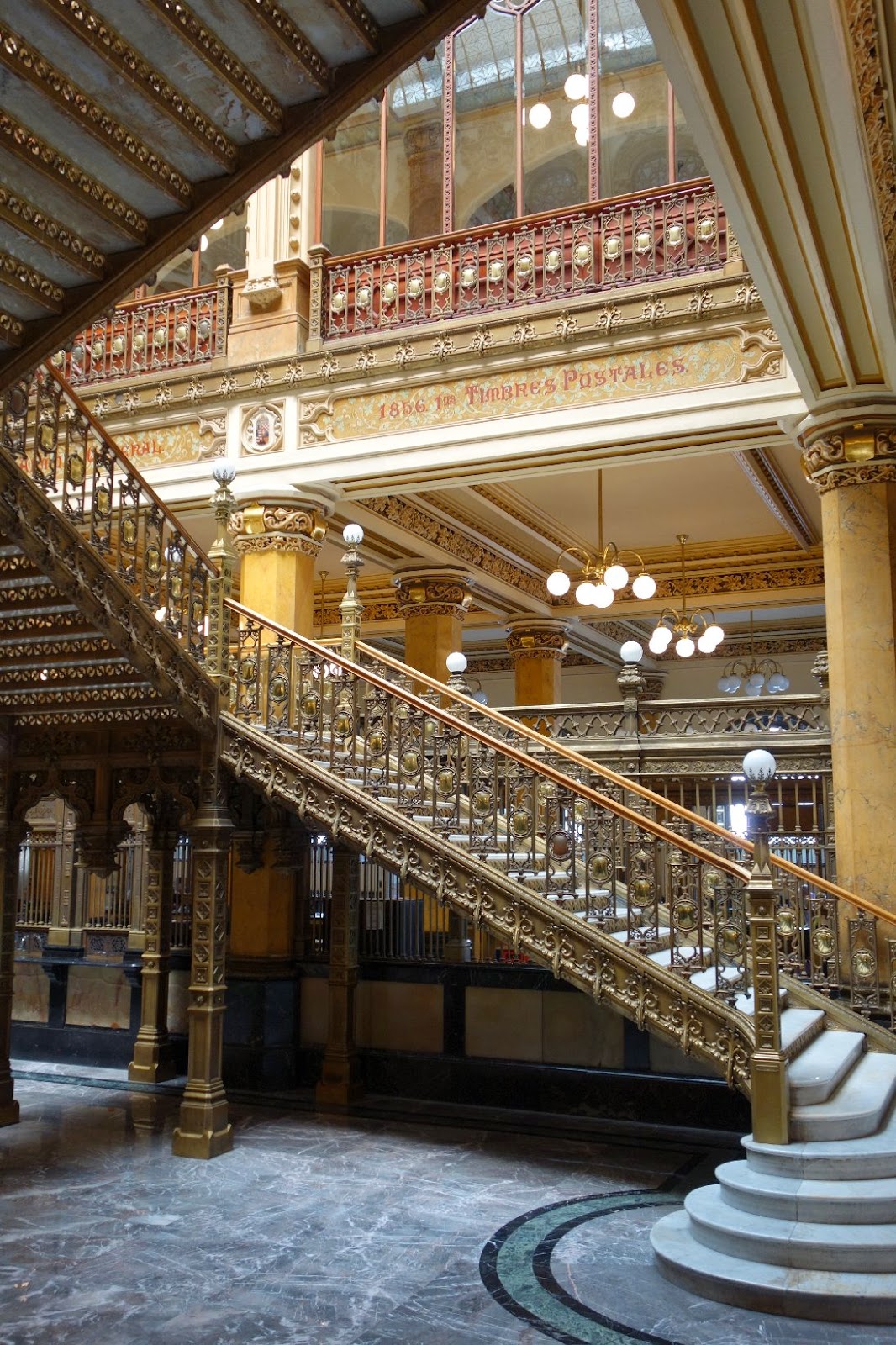 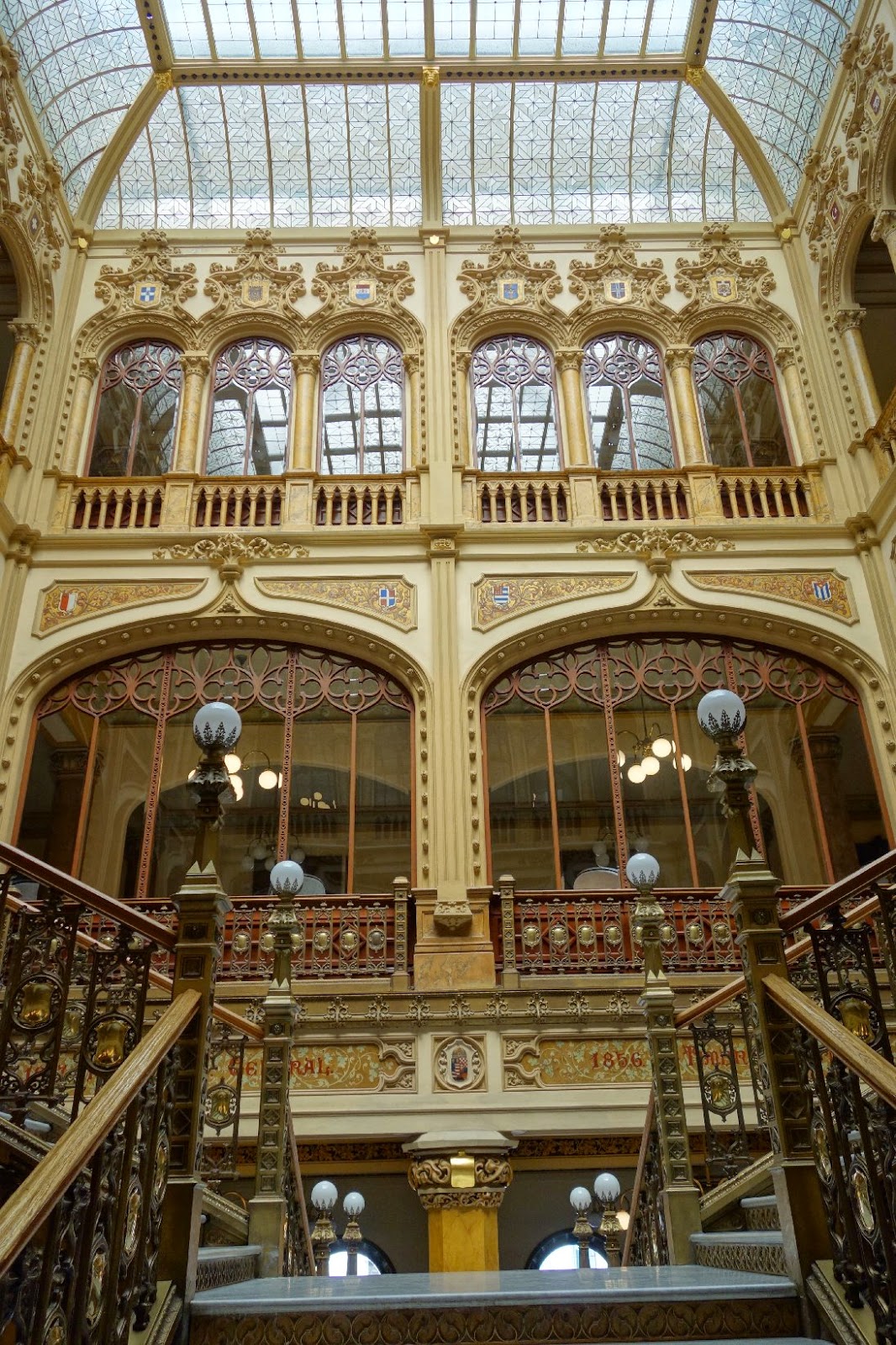 Next door to the post office is one of the finest examples of neo-classical architecture from the late colonial period, the "Palacio de Minería" (the Palace of Mining).  It was designed by the Spanish-born architect and sculptor Manuel Tolsá.  Tolsá came to Mexico and left his mark on the city's architecture.  The Palace of Mining was built between 1797 and 1813 to house the School of Mining.  Today it belongs the School of Engineering of the National University of Mexico.  I noticed that a portion of the building is open to the public as a museum dedicated to the life and work of Tolsá.  Unfortunately, it was not open at the time that I was there, so that will be something for me to see on a future visit. 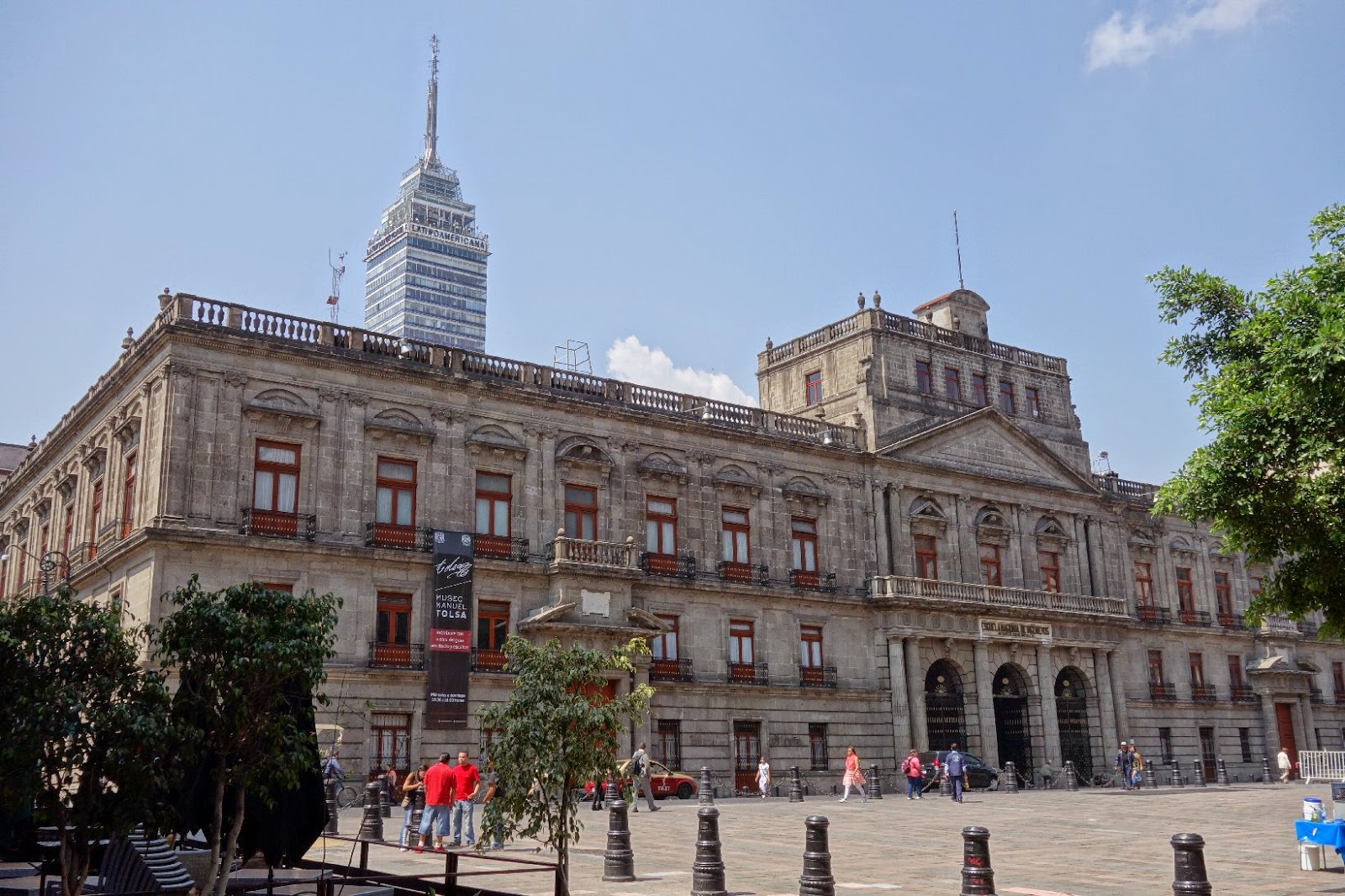 The plaza in front of the Palace of Mining is called the Plaza Tolsá.  On the opposite side of the plaza is another impressive building.  It was built between 1905 and 1911 to house the government ministries of communications and public works, but today it houses the National Museum of Art.  I have been there before, but I paid another visit and spent a couple hours strolling through its galleries.  That will be the topic of my next post. 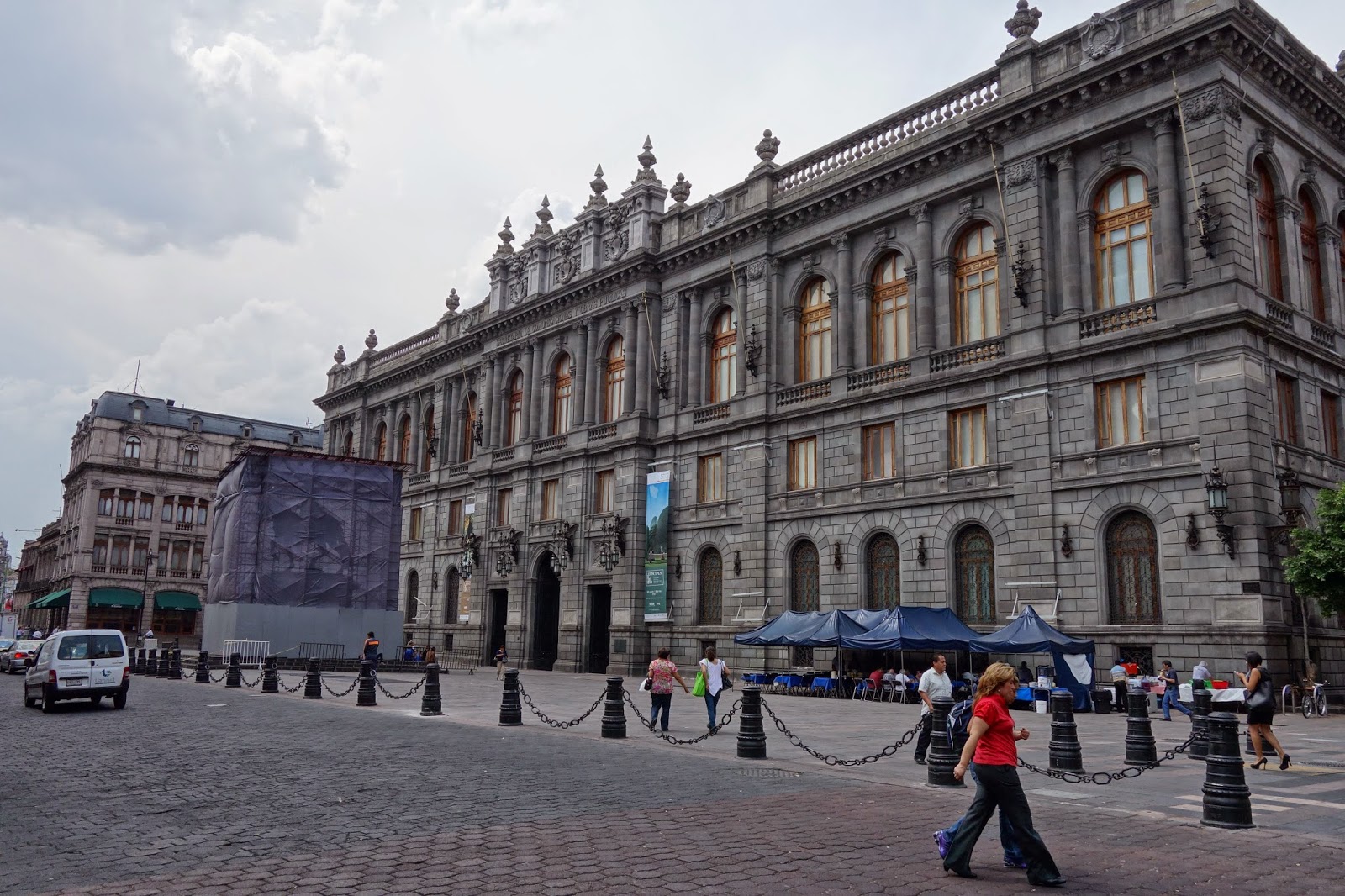 If you look carefully at the above picture, you will notice what appears to be a big box in front of the museum.  It is scaffolding and mesh that covers a bronze statue of King Carlos IV of Spain. 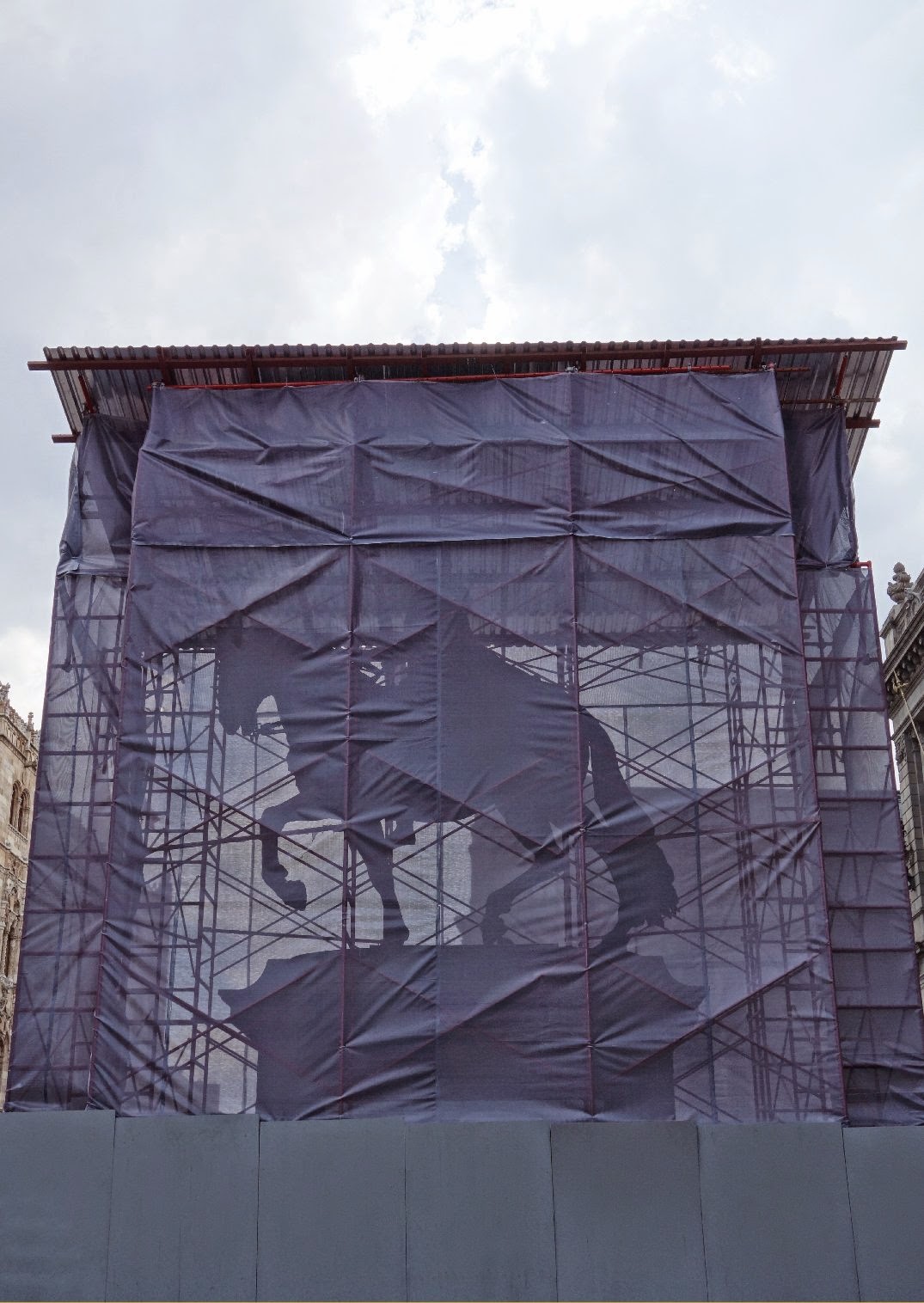 The statue was created in 1803 by Manuel Tolsá, and is considered a masterpiece of equestrian sculpture.  It is the second largest cast bronze statue in the world.

Why is it covered up?  In 2013 restoration work on the sculpture went seriously awry.  Nitric acid was used by the restoration team, and it severely damaged the bronze.  I have not been able to find any information as to what is going to be done, or if it's possible to repair the damage.

After Mexico won its independence, anti-Spanish sentiment ran high and the statue was hidden away lest it be destroyed.  Eventually it was placed on one of the traffic circles along the Paseo de la Reforma.  That is where I first saw it.  Later it was moved to the Plaza Tolsá.

Here is an image from the web I found of "El Caballito" when it was on the Paseo de la Reforma... 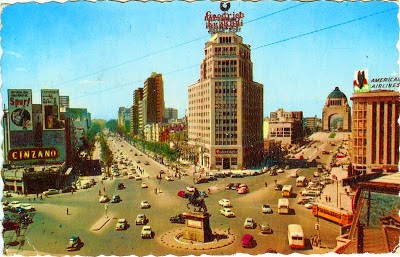 ...and an image of the statue on the Plaza Tolsá. 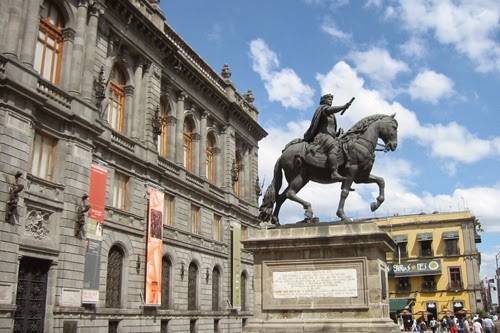