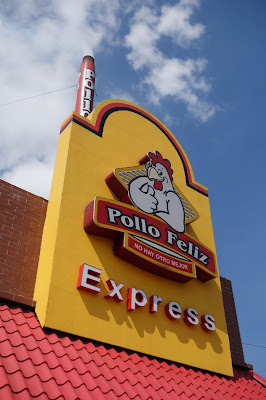 "Pollo Feliz" (Happy Chicken) is a major restaurant / take-out chain here in Mexico.  I suppose that you could compare it to our KFC (although that chain is also down here).  For some time, "Pollo Feliz" has been an inside joke with Alejandro and me.  A few years ago I found a hilarious video on You Tube which I shared with him.

(You can watch that video here.)

One of the lines from that video is "El Pollo Loco es muy delicioso."  Even though "Pollo Loco" is a different chain based in California,  it soon became a running joke that every time Alejandro and I would pass by a "Pollo Feliz" in Mexico City, I would say, "El Pollo Feliz es muy delicioso".

Yesterday was the Day of the Dead, so Alejandro didn't have to work.  We spent the day at his parents' house.  In the afternoon we went to the neighborhood market to get something to fix for dinner, and I suggested, "Is there a "Pollo Feliz" nearby?  We could just get something from there to take back."

We walked several blocks to a "Pollo Feliz", and got one of their dinner packages.  It included a whole chicken, salad, refried beans, and macaroni salad (which they called "espaguetti") 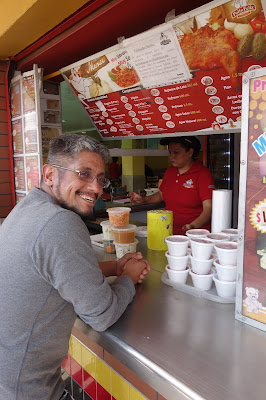 So, was "Pollo Feliz" muy delicioso?  It was good, definitely better than KFC.  The "frijoles" were too salty, but other than that it was a decent meal.

I suppose that I should mention last night's major disappointment.  The Cleveland Indians lost to the Chicago Cubs in the World Series.  I do have to admit, that if the Cubs, the perennial underdogs, had been playing against any other team, I would have been cheering them on.  The Cubs had not won a World Series since 1908, so I guess we cannot begrudge them their victory.  The Indians have not won since 1948, so perhaps next year will be their turn.
Posted by Retired Teacher at 1:24:00 PM