Culinary Therapy to Chase Away the Blues

For nearly 24 hours, from the evening of the election until well into the next day, I had no appetite at all.  Although I still have a lot on my mind, my appetite is back to normal.

Last night Alejandro and I went to one of our favorite restaurants, "Angelopolitano".  I have written about it a number of times on this blog.  It is located in the neighborhood of Roma Norte about fifteen minutes from the apartment.  "Angelopolitano" specializes in the food of the city and state of Puebla.

I always have a difficult time deciding what I am going to order there, because there are so many scrumptious dishes on the menu.  Many times I will order the "chile en nogada", the decadently delicious stuffed Poblano pepper covered with a cream walnut sauce.  But my other favorite on the menu is something called "champandongo".  As far as I know, this dish is a creation of the restaurant.  I have never seen it anywhere else.

I began with lentil and bacon soup... very tasty... and for my main course I went with the "champandongo".  It consists of layers of chicken and tortillas covered with a rich "mole" sauce and cream.  Yum!  I finished with a dessert of "natillas',  which reminds me a bit of creme brulee.  The total bill for the two of us came to about $27 U.S. 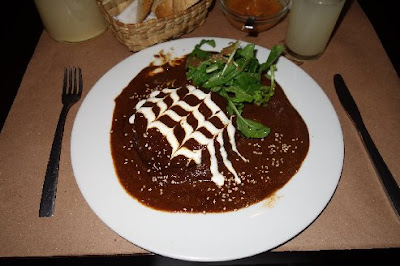 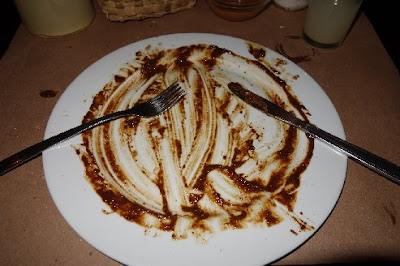 AFTER
(I figured that it would be rude to lick the platter clean!)
Posted by Retired Teacher at 10:57:00 AM