From Bottom to Top 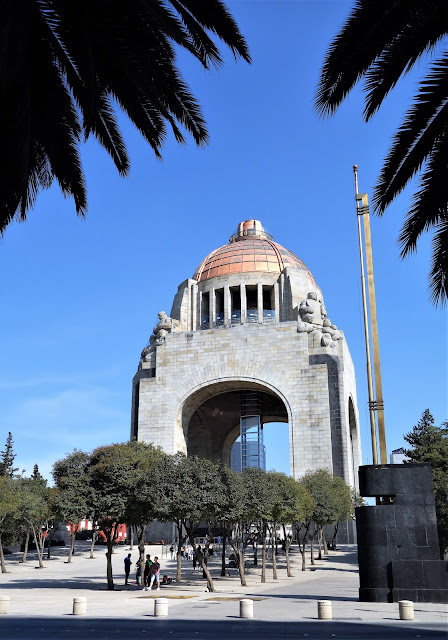 I have visited the Monument to the Mexican Revolution numerous times, and I have written about it here on the blog. 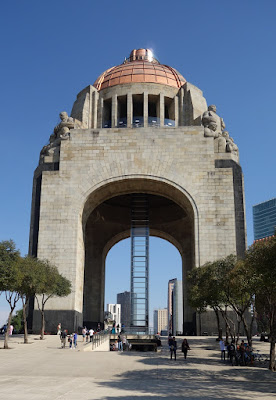 In 2010, for the centennial of the Mexican Revolution, an elevator was built which takes visitors to the observation deck around the base of the monument's enormous dome. 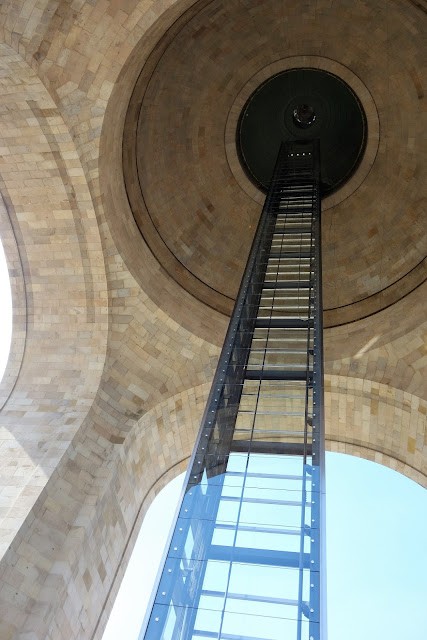 Recently a staircase was opened to the public which gives you access to the lantern at the very top of the dome. 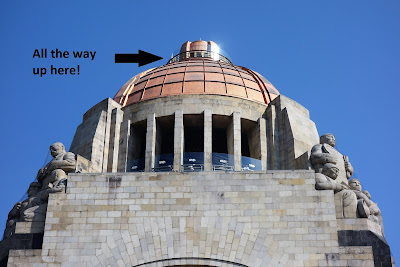 On Sunday, Alejandro and I went to the Monument.  The more expensive ticket which gives you admission to the lantern, also allows you to go underground to see the foundations of the monument. 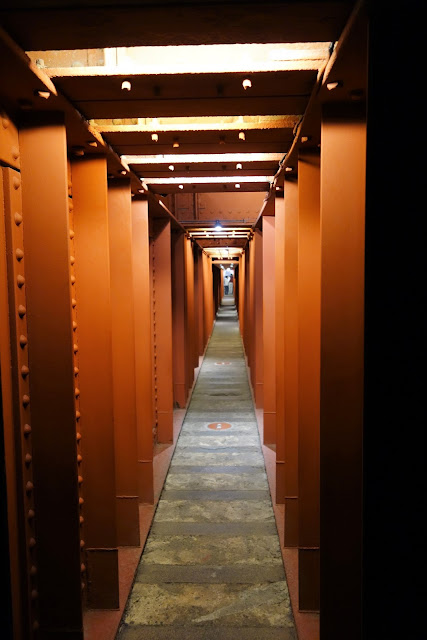 Milliken Brothers, a construction company from New York City, was hired to build the structure's steel foundation.  Steel  beams, large cranes and skilled workers were brought from New York.  It was a project that rivalled the construction of the new skyscrapers in the United States.


Alejandro and I underground

Descriptive information along the underground passageways tell the history of the structure.  It was originally planned as an ornate Legislative Palace.  It was going to be another one the grandiose building projects during the rule of dictator Porfirio Díaz.  A French architect drew up plans for the neo-classical building. 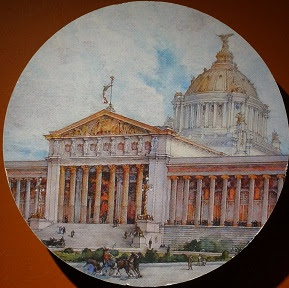 Diaz laid the first stone in 1910 as a part of the centennial celebrations of Mexico's independence.  A short time later the Mexican Revolution broke out, and in 1911 Díaz was ousted after ruling the country for 31 years.  Construction on the proposed Legislative Palace continued under the new President Francisco Madero, but after Madero was assassinated in 1913 work on the building ceased.  The metal framework of the central dome stood unfinished for twenty years. 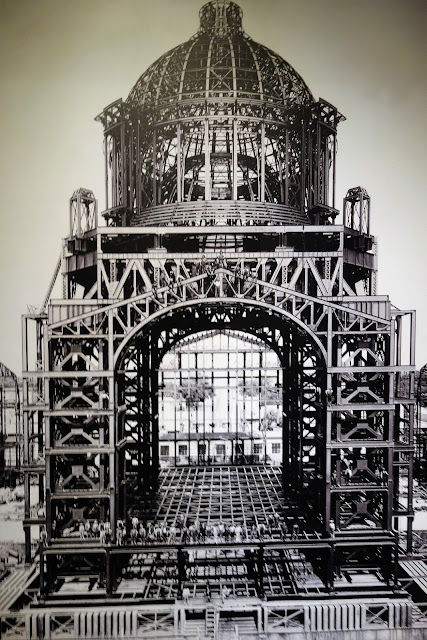 Finally plans were made to convert the structure into a monument honoring the Revolution that overthrew the dictator who had begun its construction.  The metal framework was covered with a new design in a combination of Art Deco and Mexican socialist realism style.  The monument was completed in 1938. 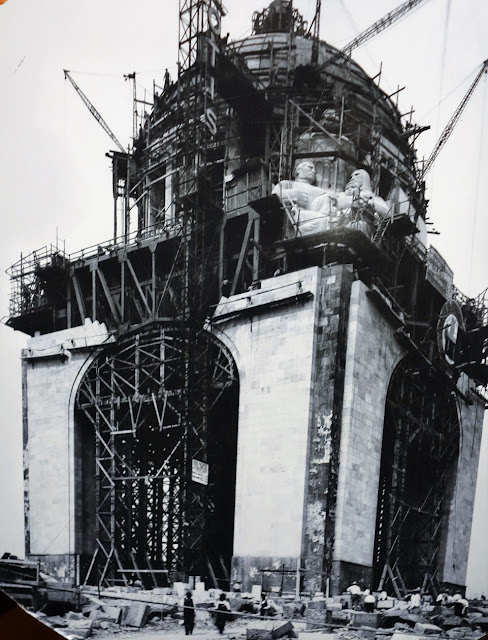 The monument stands 220 feet high and is considered the largest triunfal arch in the world.

Some other interesting facts presented in the underground displays... 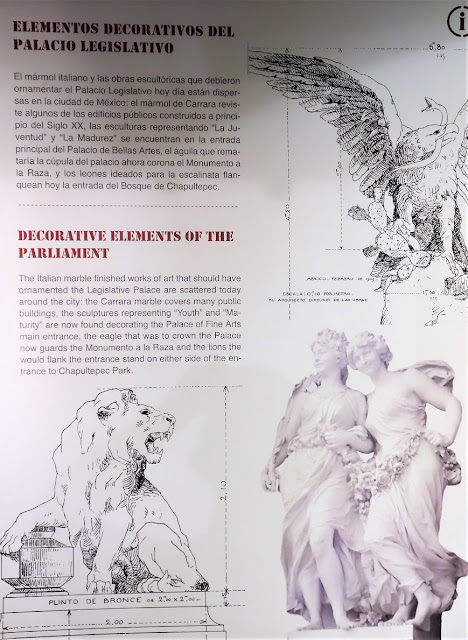 Some of the decorative elements that had been made to adorn the ornate Legislative Palace can now be found in other parts of the city.  Carrera marble statues now decorate the Palace of Fine Arts, the eagle that was supposed to crown the palace is now on the "Monumento a la Raza", and the lions that were going to flank the doorway are now at the main entrance to Chapultepec Park. 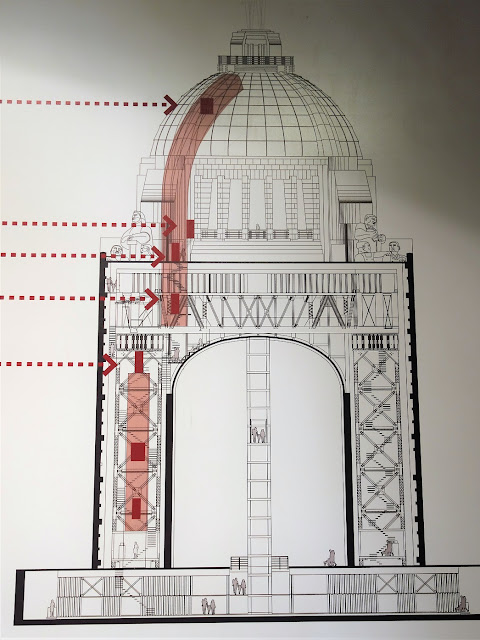 When the monument was completed in 1938 there was an elevator in one of the pillars, and another one with a unique curvature that went all the way to the lantern at the top.  That elevator was closed to the public in 1968.  It wasn't until 2010 that the glass elevator in the center was built, and people could once again go part way up the structure.  Today access to the lantern is by a metal staircase, not by the old, curved elevator.

After our visit to the foundations of the monument, our next step was to take the elevator up to the first observation deck.


I have visited that deck, which circles the base of the dome, several times.  The view is one of the best in the city. 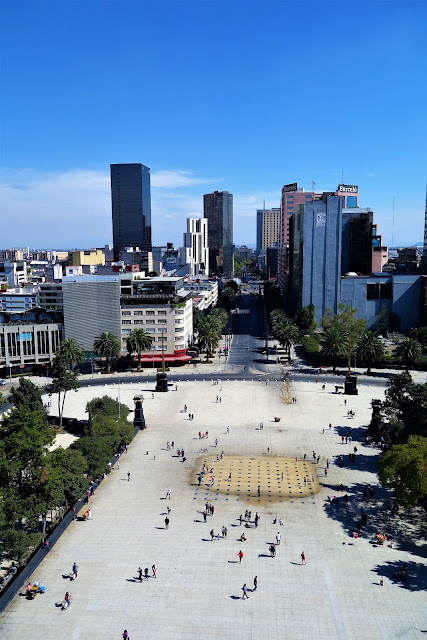 Looking to the east Juárez Avenue heads toward the historic center of the city. 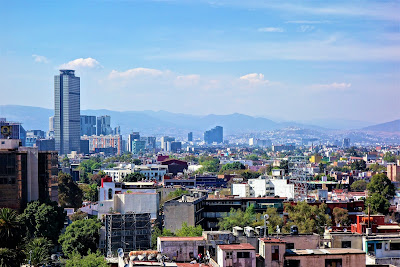 Looking to the west
The tall building to the left is the PEMEX Building, the headquarters of Mexico´s government owned petroleum company. 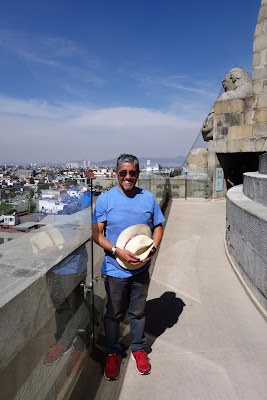 Alejandro poses on the observation deck. 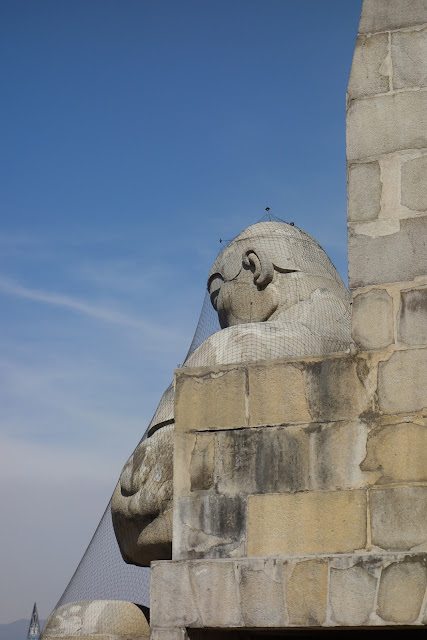 You can only see a little of the massive sculptures that decorate
the four corners of the monument.

Next we climbed the metal steps within the dome leading up to the lantern.  I would not advise it for anyone who has a fear of heights. 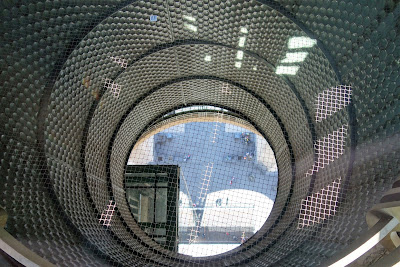 Looking straight down to the plaza 200 feet below.

The view from the top really isn't that much better.  In fact, because of the tall plexiglass barriers it is not as good for photography. 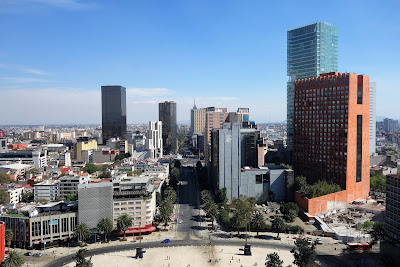 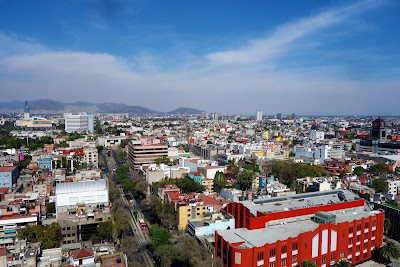 However, I was still glad to have made the climb all the way to the top of one of Mexico City's most iconic monuments. 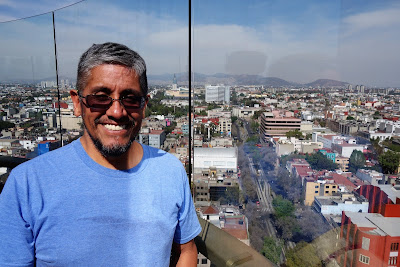