It was one year ago today, January 28th, that María Luisa, Alejandro's mother, passed away.  January 29th is the birthday of Pedro, Alejandro's father.

This past weekend we remembered María Luisa's passing and celebrated Pedro's birthday.

On Saturday at noon a mass was held at the nearby parish church in memory of Alejandro's mother. 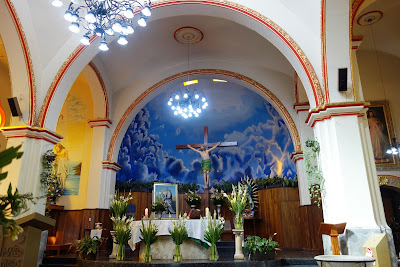 After the mass, the relatives and friends in attendance all came to the house.   There were around 35 people in all.  Fortunately, Alejandro and his sister did not have to prepare food for them all.  Alejandro had ordered enough "mixiotes" to feed fifty people.  "Mixiote" is a pit- barbequed meat dish seasoned with chiles and spices.  The meat mixture is put in little bags made from the skin of the maguey plant before being roasted.  Salsas were provided, as well as garnishes of onions and "nopales" (sliced prickly-pear cactus paddles... thorns removed of course).  After the mass, Alejandro's sister went out and bought fresh tortillas so that we could make tacos with the "mixiotes".  To drink there were a variety of soft drinks, beer and tequila.  Alejandro also decided to make the traditional "ponche" (punch) that is usually served at Christmas.

Alejandro and I were up at 7 AM on Saturday morning to make the "ponche".  I helped with the preparation of the fruit that is used. 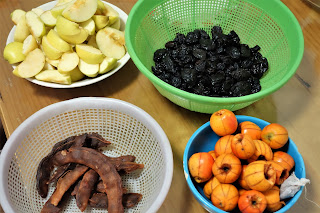 There are slices of apple and guava, prunes and raisins, tejocotes (a unique Mexican fruit) and tamarind removed from its pods.  "Piloncillo" (little cones of unrefined, brown sugar), a cinnamon stick and a bit of "jamaica" (dried hibiscus blossoms) are put into a large kettle full of water.  The water is brought to a boil, and then all the fruit is added.  That is left to simmer for several hours.  It is served hot and has the taste of a very fruity tea. 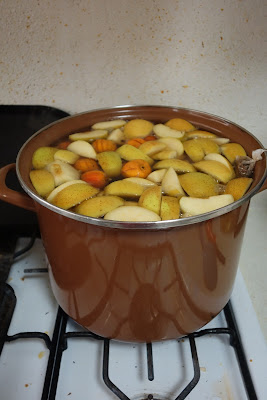 After we put the "ponche" together, Alejandro and I went to pick up the "mixiotes".  And then we went to a bakery to pick up a birthday cake.  Alejandro's father had no idea that this gathering was also going to be a celebration of his birthday.  Fortunately, when we got back to the house, his dad was upstairs, and didn't see us bring in the cake.  We then barely had time to shower, get dressed and head to the church.

After the mass, we were all at the house eating "mixiotes" when a mariachi band entered through the front door singing "Las Mañanitas", the traditional Mexican birthday song.

There is a street in the neighborhood where mariachis bands hang out, and the night before Alejandro had contracted a group to come and play at the party.  They stayed for about an hour serenading us and taking requests. 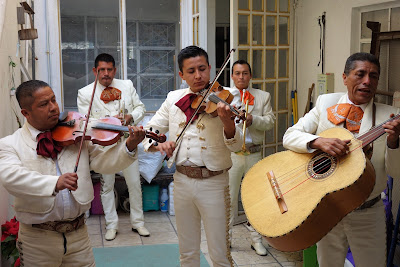 Pedro dancing with his daughter, Sandra

After the mariachis left, the birthday cake was brought out, and once again, "Las Mañanitas" was sung.


It was a complete surprise for Alejandro's father, and it helped greatly to lift his spirit on an otherwise sad occasion.