Who Would Have Thought...?

Magazines are always coming out with lists... the best, the worst, etc., etc..  They are usually very subjective and should be taken with a grain of salt.  For example, earlier this year "Travel & Leisure Magazine" announced that San Miguel de Allende was the best place in the world.  San Miguel is a lovely town, but I would not say that it is the best town in Mexico, much less in the entire world!

Now "National Geographic Traveler Magazine" has come out with their list of the 21 best travel destinations in the world for 2018.  I would tend to place a bit more faith in National Geographic than Travel & Leisure, but I was shocked to see that my hometown of Cleveland, Ohio, is on the list.  Yes, Cleveland, that "rust belt" city that used to be called "the Mistake on the Lake". 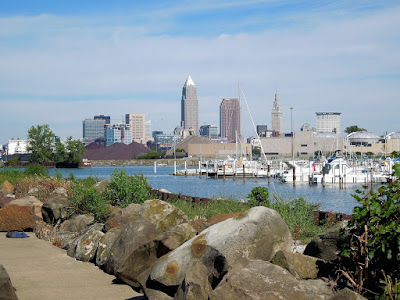 Now, don't get me wrong.  If you have read my blog for very long, you know that I have often sung the praises of Cleveland, but I never expected it to be listed as one of the "must-see" destinations in the world.

Cleveland was listed as one of seven cities chosen for their cultural attractions.  I must say that, except for Vienna, Austria, and Oaxaca, Mexico, the choices of culture destinations were pretty much off the radar of the typical tourist.  The others were Friesland, Netherlands; Harar, Ethiopia; Labrador, Canada; and Tetouan, Morocco.

So what does Cleveland have to offer?  As I have written many times before, our orchestra is not only one of the best orchestras in the country...  it is one of the best in the WORLD!  Our art museum is not as large as the Louvre or the Metropolitan, but it is praised for its quality and for its comprehensiveness.  Here the entire history of art is on display from ancient Egypt to the 21st century.  The University Circle neighborhood boasts the highest concentration of cultural and educational institutions of anywhere in the U.S.  Our Playhouse Square is the largest performing arts complex in the U.S. outside of New York City.  I have heard often that travelers to Cleveland are surprised and impressed with our city.

The magazine article states, "Onion-domed churches and cold-brew cafes on streets a-flicker with gas porch lights might summon images of Krakow or Budapest. But this is Cleveland. The big-boned Ohio city built by Eastern European immigrants and Midwestern moxie ripples with new cultural energy."

I am not sure that I agree that my city is one of the top destinations in the world, but it is nice to have bragging rights, and to be able to say "touché" to all those who have been putting Cleveland down for so many years.