My Favorite Museums in Mexico City

I have mentioned before that Mexico City claims to have more museums than any other city in the world.  There are supposedly around 150 museums there.  I was trying to compile a list of all those which I have visited, and, although I probably missed a few, I came up with forty.  Some, of course, are more interesting than others, but the majority were worth visiting.  On my upcoming trip to Mexico I will probably see a few more.

Out of the museums that I have visited, here are my five favorites.

1.  The National Museum of Anthropology

The famous Sun Stone is the centerpiece of the Aztec Hall.

My list is in no particular order, but this museum is definitely my number one favorite and is the one museum which no visitor to Mexico City should miss.  It is one of the great museums of the world.  The building, which opened in 1964, is in itself a stunning work of modern architecture.  The ground floor displays the world's largest collection of artifacts from the pre-Columbian civilizations of Mexico.  The upper floor has ethnographic exhibits dealing with the indigenous peoples of Mexico today.  I have visited this place countless times.  I never tire of it, and I always find something that I had not noticed before.

2. The Museum of the "Templo Mayor" 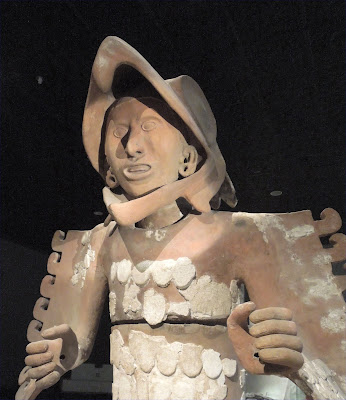 A life-size clay figure of an Aztec Eagle Warrior

In 1978 a utility crew working under the streets of Mexico City discovered an enormous Aztec carving.  This marked the beginning of a project to excavate the foundations of the "Templo Mayor", the main Aztec temple.  Thousands of artifacts were found, and in 1987 a museum was built to house the discoveries.  Although much smaller than the Anthropology Museum, it has an impressive collection which is dramatically displayed. (The building was designed by the same architect who did the Anthropology Museum.)

3. The Museum of Popular Arts 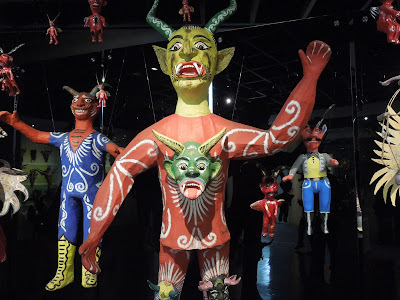 This museum opened in 2006, and is located in an Art Deco building which once served as Mexico City's central fire station.  It contains an excellent collection of Mexico's wide variety of handicrafts and folk art from the past and present.  It is just large enough to provide a satisfying visit without inducing "museum fatigue". 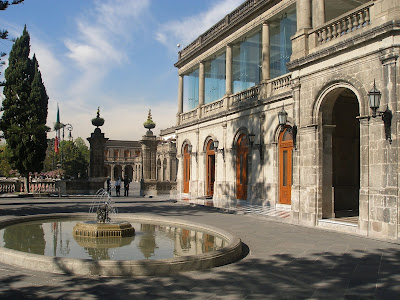 Chapultepec Castle was built in 1775 to serve as a home for the Spanish viceroys.  Throughout its long history it has served as a military academy, an imperial palace, an observatory, and a Presidential home.  It is the only castle in North America to have served as a royal residence (during the ill-fated reign of Emperor Maximillian in the 1860s).  Since 1939 it has served as the National Museum of History.  Although the historical artifacts may not be of great interest to the casual visitor, the museum features numerous mural paintings by some of Mexico's top artists which portray events in the country's history.  There are also rooms with the lavish furnishings of the Emperor Maximillian and his wife Carlota.  The terrace of the castle offers a great view of the city.

5. The National Museum of Art 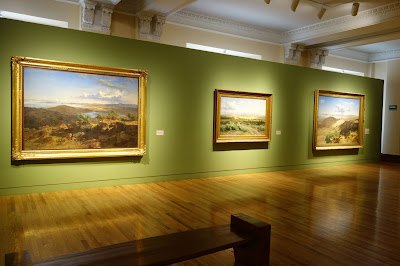 A visit to this museum is worthwhile if only to see the spectacular building in which it is housed.  It was built in the early 1900s as the Secretariat of Communications and Public Works.  The museum contains Mexican art from the colonial era up to the mid-20th century.   I find the rooms filled with colonial religious art to be rather dreary.  What I love about this museum is that it contains the world's largest collection of paintings by my favorite Mexican artist, José María Velasco.  Velasco was a 19th century painter famous for his beautiful landscapes portraying the Mexican countryside.

As I said, I have enjoyed most of the museums that I have visited in Mexico City.  Which was my least favorite?  Without a doubt, the Jumex Museum.  Jumex (Jugos Mexicanos) is an important company which sells juices and other beverages.  In 2013 they opened a museum to showcase contemporary art.  I admit that I am not a fan of much of what passes for art these days.  There was not that much on display at the museum.  It was all avant-garde stuff, most of which I found laughable.  It is pretty sad when I found the design of the public restroom to be more interesting than what was hanging of the gallery walls!