Some more pictures from my trip to Mexico City last January...

On my last visit to the National Museum of Anthropology, I noticed a new feature.  They have begun temporary exhibits in which they highlight one piece from their collection and present a detailed analysis of that item.

The current exhibit which will run through April is called "Caminos de Luz - Universos Huicholes" (Roads of Light - Huichol Universes). 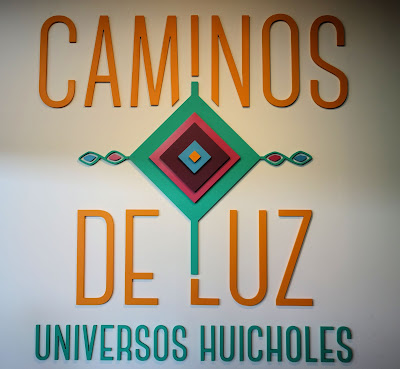 The Huichol people are an indigenous tribe living in the Mexican states of Nayarit, Jalisco, Zacatecas and Durango.  This exhibit focuses on a magnificent piece of Huichol art taken from the museum's ethnographic collection.  (Most visitors to the museum don't even make it to the upper floor which contains a large display on the life and traditions of present-day Mexico's native tribes. So this show gives people a chance to see something they might not otherwise see.)

On display is a large (4 x 8 feet) example of the yarn art for which the Huichol people are famous.  Colorful strands of yarn are glued with bees' wax or resin to a board. 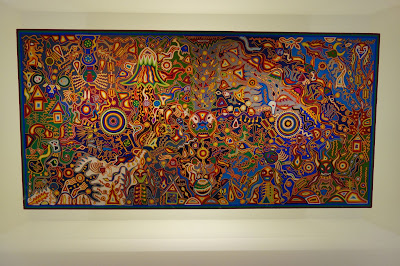 This work was created in 1980 by a noted Huichol artist by the name of José Benítez Sánchez.

These yarn paintings are much more than just colorful, intricate works of art.  They depict the mythology and religious beliefs of the Huichol people.  The exhibit explains the stories told in this painting. 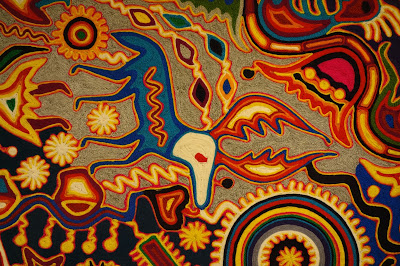 One myth depicted is of a blue deer who emerged from the sea, and traveled to the desert of Wirikuta, the place of light.  It was pursued by five hunters.  The deer transformed itself in peyote, the hallucinogenic mushroom which is sacred to the Huichol.  The hunters ate the peyote and had visions of the gods.  As they ate, the sun rose for the first time.

More than any other tribe in Mexico, the Huichol have clung to their ancient beliefs and have resisted conversion by missionaries.  Each year they still make a pilgrimage to the deserts of the state of San Luis Potosí where they gather peyote for their ceremonies.
Posted by Retired Teacher at 11:03:00 AM