As I was going through my photos from my trip to Mexico City in January, I realized that there were a few more pictures that I meant to post.

In a city as huge and congested as Mexico City, parking on the street is, of course, a problem.  In recent years "parquímetros"... parking meters... have been installed along the streets in certain upscale neighborhoods.  On one of my trips a few years ago, plans had been announced to put in parking meters in Condesa, the neighborhood where I was staying.  There were banners and rallies to protest the proposal.  Many of the older homes and apartment buildings do not have garages.  For residents who have no where to park but on the street, constantly feeding the meter would be an inconvenience.  In spite of the opposition, the "parquímetros" were installed, and, as far as I know, the unfortunate residents do not receive any special dispensation.

Now at intervals along every street you see these machines... 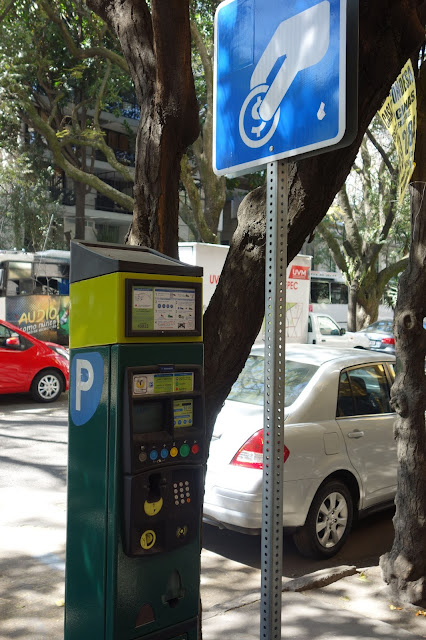 You put some coins into the machine... 2 pesos (10 cents) for every fifteen minutes.  The machine then spits out a ticket that you place on top of the dashboard by the window.  In Condesa the parking rules are enforced from 8 AM until 8 PM on Mondays through Wednesdays and from 8 AM until 1 AM on Thursdays through Saturdays.

What happens if you don't feed the meter?

As I was walking to the weekly outdoor market in Condesa, I saw this truck parked along the street.  It was probably a produce truck, and obviously the driver had not paid the meter or his time had expired. 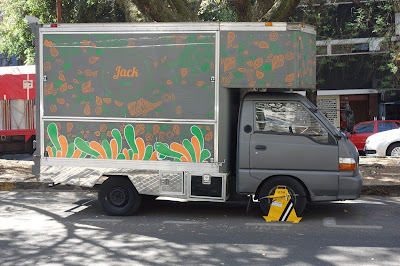 A clamp is placed on the tire, and is not removed until the fine is paid.  The driver can pay the fine (around 500 pesos... $25 US) at one of the ubiquitous convenience stores... Oxxo or 7-Eleven.

According to an article written in 2015, EcoParq, the city department in charge of the "parquímetros", collected $6.7 million (US) in the first four months of that year.  Supposedly 30% of the revenues are to be spent for neighborhood improvements.  However, at the time when the article was written, there was no transparency as to how that money was being spent.