Whenever I travel I like to take a book with me to read while waiting in the airport, and traveling on the plane.  And during my "downtime" on a trip, I like to read a bit when I am not working on my blog.  Since I will be gone for an entire month on my upcoming trip, I definitely wanted some reading material.

Unfortunately, ever since Borders went out of business, I must take a 30 minute trek to get to the nearest Barnes and Nobles.  However, I remembered that there is a used bookstore that is not so far from my house.  I decided to go there today and see if there might be some books that interested me.  I spent a pleasant half hour browsing, and could have spent much more time.  But after selecting three books, I decided that I had more than enough material for this trip. 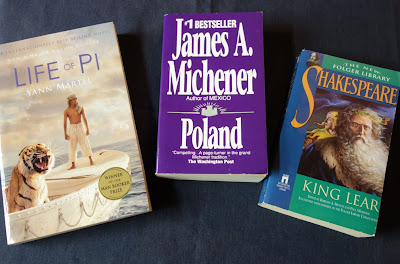 The first book that I chose was "Life of Pi".  I did not see the movie, and it sounded like an interesting story.

I have long been a fan of thick, historical novels that span generations.  I have read most of Edward Rutherford's novels, and I recently finished Ken Follett's trilogy on the twentieth century.  The very first novel of this genre that I read was way back when I was in junior high school.  I read James Michener's "Hawaii" for a school book report.  (Unlike most students, I never chose some thin, quickly read tome.)  "Hawaii" is a fictional account of the islands' history from the first Polynesian settlers to modern times.  Throughout his writing career Michener would follow this format of selecting a place and creating a fictional account spanning its entire history. Years later, the second Michener novel that I read was "Centennial" which takes place in Colorado.  I had just finished my master's degree in Spanish, and after reading over 100 works of literature in Spanish, I was eager to read something in English for a change.

Generally I have enjoyed Michener's novels, but I was not able to get through one of them, "Poland".  (That's odd since my father's side of the family was Polish.)  I saw it at the bookstore, and I decided that I would give it another try.

Finally, I picked up a copy of Shakespeare's "King Lear".   I am ashamed to admit that I have only read three of Shakespeare's plays... "The Tempest", "Julius Caesar", and "Hamlet".  Those were all school assignments.  I have seen several film versions of his works, and I enjoyed most of them (although I suspect that the original language might have been adapted a bit for modern audiences).  I once tried to watch a film of a Royal Shakespeare Company production of "King Lear", and I couldn't understand half of what they were saying.  The paperback that I bought is one of those editions with copious notes explaining the archaic language.  So perhaps I will have a better understanding and appreciation of the Bard's tragedy.

Well, I think those three books should keep me occupied during my trip!