Next week my cousin Gail and her college friend Annette will arrive in Mexico City for a week's stay.  In the past when friends have come for a visit I have gone to the airport to meet them.  I take Line 4 of the Metrobus which goes to the airport terminals.  Gail and Annette are flying on Delta Airlines, and Delta flights arrive at Terminal 2.  I have never been to that terminal, since United and Interjet, the two airlines which I have taken to Mexico City, both arrive at Terminal 1.  So I figured that it would be a good idea for me to take a trial run, and familiarize myself with the other terminal.

At 1:10 this afternoon, I left the apartment and walked a couple blocks to Insurgentes Avenue to take the Line 1 Metrobus.  I took that bus as far as the Buenavista stop, got off, and crossed the street to the platform for the Line 4 Airport Metrobus. 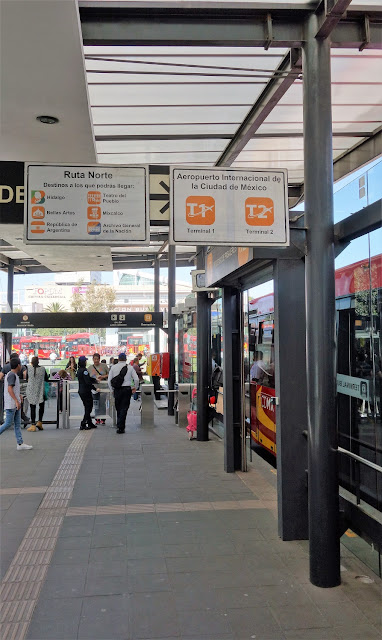 You have to make sure that you are taking a bus marked "Aeropuerto" because not all of the Line 4 buses go as far as the airport.  There was only one other person who got on the bus with me, and although the bus makes stops along the route, only a few more people got on.  The reason is that the airport bus costs 30 pesos (a whopping $1.50!) instead of the usual 6 peso Metrobus fare.  Unless you are going to the airport, not many people are willing to pay that price in spite of the luxury of having a nearly empty bus.

It was just about 3:00 P.M. when I arrived at Terminal 2, so it takes nearly two hours for me to get to the airport by bus. 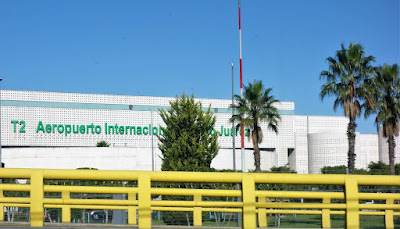 The Metrobus stop was close to Door 3, the entrance for domestic and international arrivals. 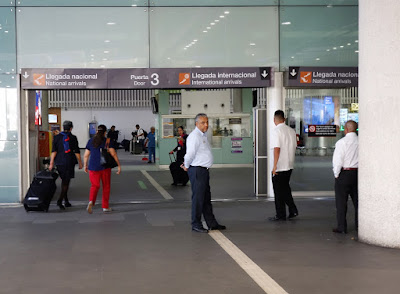 I turned to my right, and just a short distance away were the sliding glass doors through which passengers on international flights emerge after going through immigration and customs. 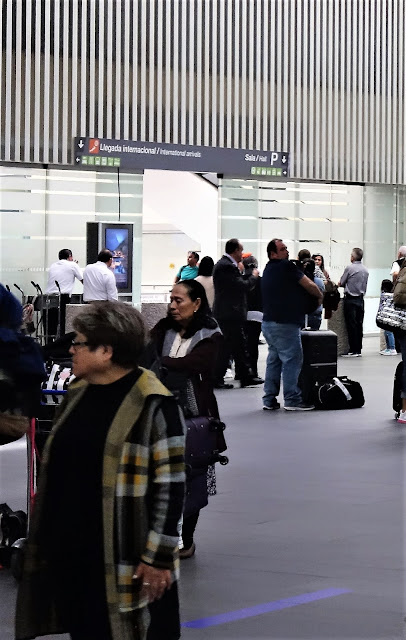 I noticed on the arrival board that the Delta flight from Atlanta, the flight which Gail will be taking next week, had arrived on time.  Hopefully she will not encounter any delays on her journey. 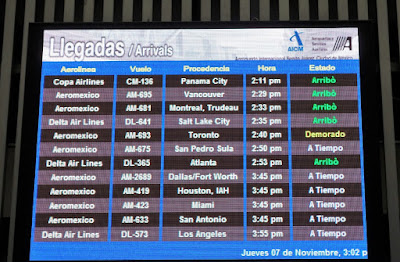 Gail's friend Annette lives in New York.  She will arrive a little less than an hour before Gail on a non-stop Delta flight from JFK.

I did a bit of exploring in the terminal.  I found the stand for authorized taxis.  (That is what we will take to their hotel.)  Upstairs I found the Delta counter where they will check in when they depart.  Since Annette arrives before Gail, I was looking for a place where we could sit and have a cup of coffee while we wait.  I was disappointed.  There were two Starbucks but none of the various Mexican coffeehouse chains.

Terminal 2 is much smaller and less crowded than Terminal 1.  It is only served by Delta, Aeromexico and a few smaller airlines such as Copa.

After my reconnaissance mission, I went out and caught the Metrobus back just as it was about to leave.
Posted by Retired Teacher at 10:02:00 PM