Earlier on this trip I wrote about a very good restaurant specializing in the cuisine of Yucatán that recently opened near my apartment.  I also read about another highly recommended place in the Centro Histórico that serves Yucatecan food.  It is called "Coox Hanal" which is Mayan for "Let's Eat".  It dates back to 1953 when a retired boxer from Mérida, Yucatán, moved to Mexico City and set up a food stand.  His business eventually expanded into a restaurant, and was then taken over by his nephew when the owner moved back to Mérida.

Unlike the restaurant near my apartment, which is rather upscale and, by Mexican standards, pricey, "Coox Hanal" is very basic.  It is located upstairs in a nondescript building on a street away from the main tourist area.  There is nothing fancy about it, but the place was packed with customers (a good sign). 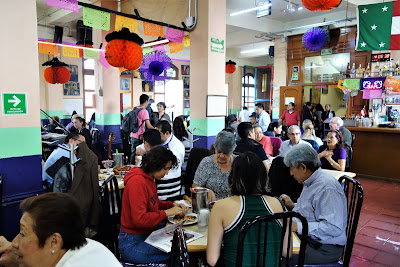 I was the only "gringo" in the place, but they must get some tourist trade since I was given a menu in English.

I ordered a dish called "papadzules", which is an enchilada filled with hard boiled eggs and covered with a pumpkin seed sauce.  It is a favorite of mine, but many restaurants, even in Yucatán, don't get the sauce right.  I figured that it would be a good test of the of place.  They got the sauce right!  The "papadzules" were as good as the best that I have had in Mérida. 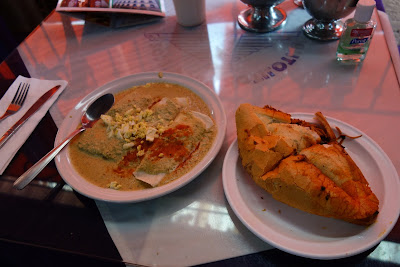 To the left, "papadzules", to the right a "torta" of "cochinita pibil"

I also ordered a "torta" (a Mexican sandwich on a thick, crusty roll) of "cochinita pibil", roasted pork marinated in bitter orange juice and flavored with "achiote" (annatto seed).  The pork seemed a bit dry to me, but I spooned on some pickled red onion, a typical condiment of Yucatán, and it was very tasty.

Inside the restaurant there was a stand... just like the ones you see on the streets of Mérida... where a lady was making "marquesitas". 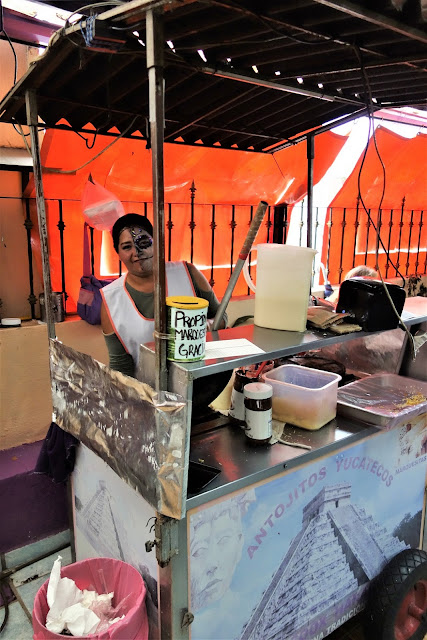 A "marquesita" is a crispy crepe that is rolled up and filled with shredded cheese and a sweet filling.  I chose "cajeta", Mexican caramel. 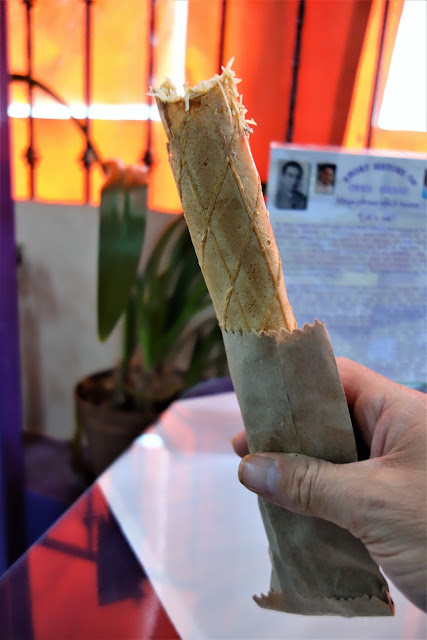 So now I have two places in Mexico City when I have a craving for good Yucatecan food.

"Coox Hanal" is on Isabel la Católica, a street that I sometimes traverse on my way to the subway after a day of sightseeing in the Centro Histórico.  The only problem is that just a few doors away is a Oaxacan restaurant that I really like.  So when passing that way, will I go for a Oaxacan or Yucatecan meal?  A tough decision!
Posted by Retired Teacher at 8:36:00 AM