On Friday I paid another visit to Mexico City's National Museum of Anthropology. 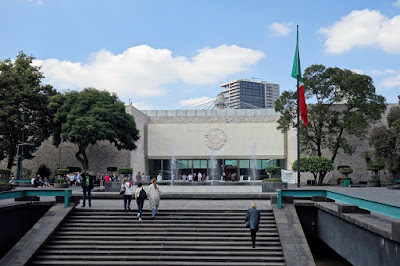 The world-class museum is of course on the itinerary of places that I will take my visitors next week.  The museum is far too large to see in one visit, so I always give a tour of some of the museum's highlights.  Beforehand I always like to go through the museum, reviewing the pieces that I will show them, and running through in my mind the narration that I will give.

When I play tour guide with friends, afterwards I always make them a slide show of pictures from the trip on a DVD disc.  I decided that I would take photographs of the museum at this time, so that I would not have to do it while giving the tour.

My tour always starts with the earliest civilization in Mexico, the Olmecs.  The last time I was at the museum several of the most outstanding pieces from the Olmec culture were not on display.  They were on tour somewhere.  Yesterday I was glad to see that those objects were back in their usual places. 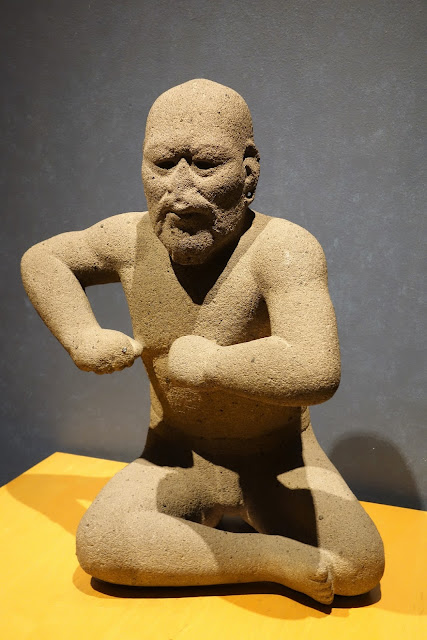 It is unlikely that the figure actually represents a wrestler.  The label next to the sculpture now simply calls it "Bearded Man".

The piece has been praised for its realism and its sense of movement and energy.  It is so unique that a few scholars have questioned it authenticity.  However when it was uncovered in 1933, archaeologists still had not done much study or excavation of the Olmec culture, so it seems unlikely that anyone would have planted a forgery.  Dating the stone statue is difficult.  It may have been carved anywhere between 1200 and 400 B.C.

From the Olmec culture I moved on to the Mayas.  While I was in the Mayan Hall, I heard one tourist debating with his son whether or not they should bother descending a staircase leading to a lower level exhibit.  I told them that one of the museum's greatest treasures is done there.

You descend to a recreation of the burial chamber of Pakal, the king of the Mayan city of Palenque.  And in a nearby showcase the jade funeral mask and jewelry that was found on Pakal's skeleton are on display. 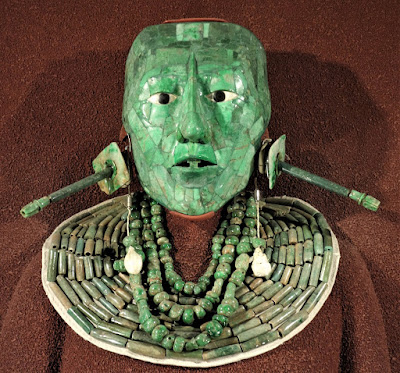 Because my cousin Gail is unable to climb pyramids, we will not take an excursion to the ruins of Teotihuacán to the north of Mexico City.  However, the Teotihuacán Hall will give them some idea of the grandeur of the first large city in the Americas. 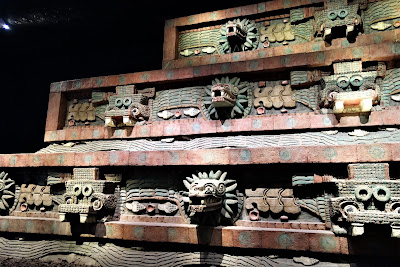 The tour will conclude with the centerpiece of the museum, the Mexica (Aztec) Hall.  For some time they have been doing work on this hall, in particular a restoration of the large model of what the Aztec capital of Tenochtitlán looked like before the arrival of the Spanish.  That work has now been completed. 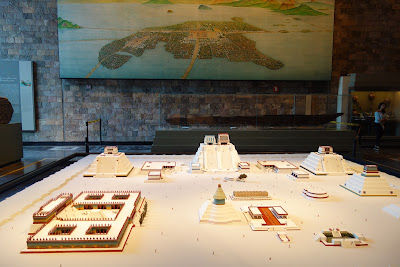 Dominating the hall is arguably the most famous item in the museum, the Aztec Sun Stone. 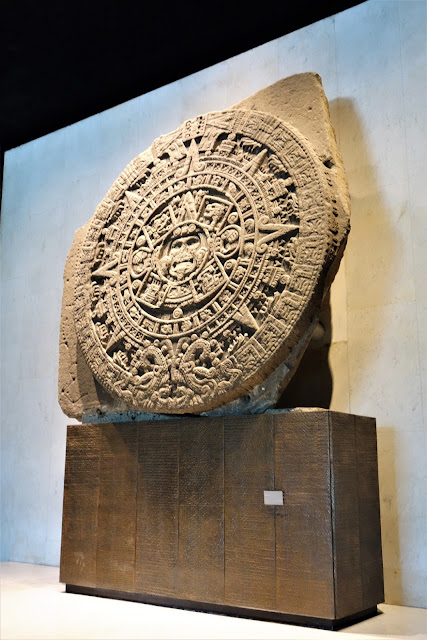 In a couple hours we will have only scratched the surface of the museum's treasures, but I think that my guests will come away with an appreciation of Mexico's great civilizations.
Posted by Retired Teacher at 8:55:00 AM