Not Approved by the Church

The Day of the Dead, as it is celebrated in Mexico, has its roots in pre-Hispanic Mexico.  In the Aztec culture, an entire month, coinciding more or less with our month of August, was dedicated in honor of the dead.  Altars, decorated with skulls, would be constructed in honor of the Lord and Lady of the Underworld.  When the Spanish arrived and forced the native population to convert to Catholicism, a process known as syncretism occurred.  The pre-Hispanic rituals were absorbed and given a veneer of Christianity.  The month-long celebration of the dead was moved to early November to coincide with All Souls' Day in the Christian calendar.  The natives were allowed to continue to build their altars or "ofrendas", but they were to be dedicated to the souls of the departed, and they were required to contain a Catholic image such as a crucifix or the image of a saint.

In Mexico City's Plaza Tolsá, in front of the National Museum of Art, people gather on weekends to honor and preserve their Aztec heritage with music and dance.  When I left the museum on Sunday, I found that during the short time that I had been inside, a large and elaborate "ofrenda" had been built on the plaza.  But this "ofrenda" had no crosses or saints... it looked as if it might have been taken straight from the pre-conquest era of the Aztecs. 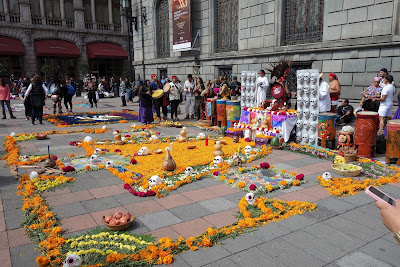 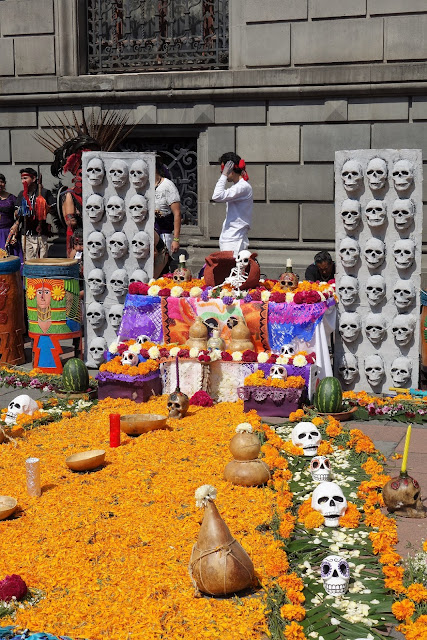 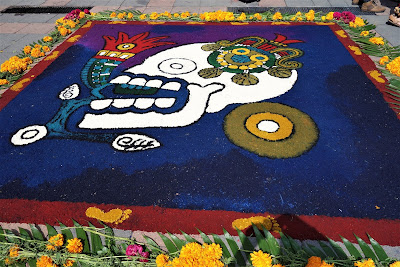 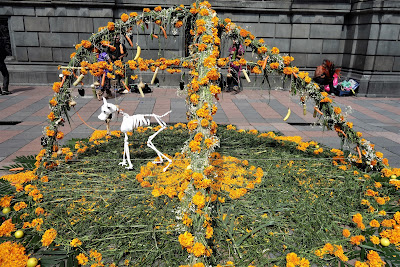 The skeletal image of a dog is a reminder that "xolos", the Mexican hairless dogs, were often buried with the dead to serve as guides through the underworld.

I can imagine that if the 16th century Catholic monks could see this, they would have been shocked that after five centuries the Aztec rituals have survived.
Posted by Retired Teacher at 9:15:00 AM