Most visitors to Mexico City have at some point seen this impressive marble monument near the entrance to Chapultepec Park. 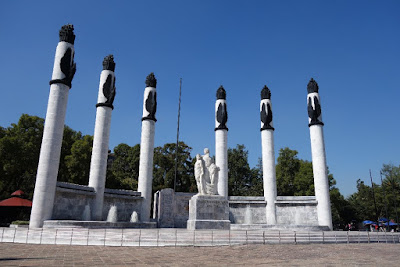 The monument, known as the "Altar a la Patria" (Altar to the Fatherland), honors six teenagers who are known as the "Niños Héroes"... the "Boy Heroes".  During the Mexican-American War (1846-1848) the United States army landed at the port of Veracruz and marched inland to Mexico City.  By September of 1847 they had reached the outskirts of the capital.  At that time Chapultepec Castle served as the site of the "Colegio Militar" (the military academy which is Mexico's equivalent to our West Point).  The young cadets of the school along with the Battalion of San Blas led by General Nicolás Bravo put up a final defense to stop the invaders' advance into the city.

The defenders were outnumbered by General Winfield Scott's army, and Bravo ordered a retreat.  According to the story, six of the teenage cadets stayed behind at the castle only to meet their death in battle.

Behind the imposing "Altar de la Patria" is a smaller and older monument at the foot of Chapultepec Hill.  I suspect that there are very few visitors who know of its existence. (I didn't know it was there until the other day when I was walking along a less traveled path in the park.)  I dare say that there are probably a lot of Mexico City residents who are not aware of this simple monument. 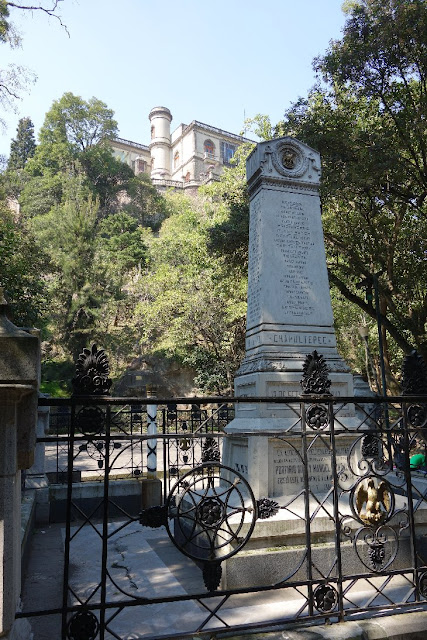 Chapultepec Castle stands atop the hill above the monument.

The monument honors not only the "Boy Heroes" but also those who were injured or taken prisoner during the Battle of Chapultepec. 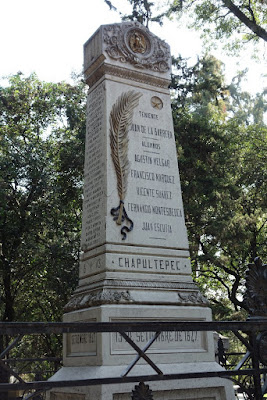 The story goes on that the last of the "Boy Heroes", Juan Escutia, wrapped himself in the Mexican flag and flung himself to his death from the ramparts of the castle.  A metal plaque on the rocks of the hillside marks the spot where Juan Escutia supposedly died. 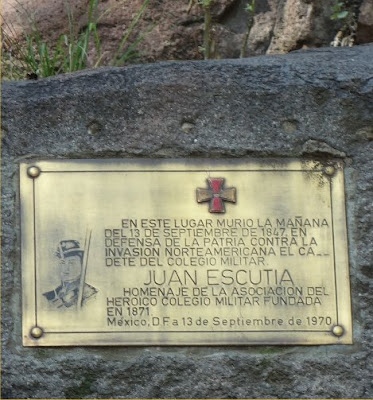 There has been debate over how much of the story of the "Boy Heroes" is fact and how much is patriotic legend.  There are some historians who claim that the "Boy Heroes" never existed, that the whole story was invented to spur patriotism.   Such revisionist  history must seem like sheer blasphemy to Mexicans who grew up learning about the "Niños Héroes" in school.
More widely accepted by scholars is that elements of the story have been exaggerated, especially the part about Juan Escutia's fateful leap.  Some write that he was not a cadet, but a member of the Battalion of San Blas, and that he was shot by a U.S. soldier while he attempted to flee the castle.
Whatever happened that morning of September 13, 1847, there is no doubt that the story of the "Niños Héroes" are very much a part of Mexico's culture.