I arrived home this evening. It was a long day, but things went fairly smoothly.  I was at Mexico City International Airport at 6:30 A.M.   I was upgraded to business class, so I had a comfortable seat, and I was served a second breakfast. (I already had a breakfast at the airport.)  The only snafu of the trip was that departure from Mexico City was delayed by about an hour due to a mechanical problem of sorts.  One of the ceiling panels in the cabin was loose, so a mechanic was called in.  He fixed it by securing the panel with duct tape!!  Since I had a long layover in Houston I wasn't worried, but the situation reinforced my conviction that it's better to have a long layover than to risk missing a connection... as some people on the flight surely did.

At Houston airport everything went very smoothly. I had no long lines at immigration or going through security.  (I had feared that it would be a hassle due to recent events... but it was not.)  I passed through immigration, picked up my suitcase, went through customs, rechecked my suitcase, and passed through security in about twenty minutes.  One of the perks with my credit card is that each year I get a couple passes for the United Club lounge.  So I was able to spend my layover in a more comfortable, quieter environment.

My flight to Cleveland left on time and arrived ten minutes early. 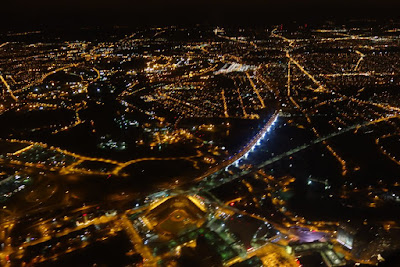 Cleveland from the plane
Now I have a day at home, and then I drive down to Columbus for Thanksgiving with family.﻿

Email ThisBlogThis!Share to TwitterShare to FacebookShare to Pinterest
Labels: transportation