On my recent trip to Mexico City I revisited Chapultepec Castle, the historic building which is today the National Museum of History. 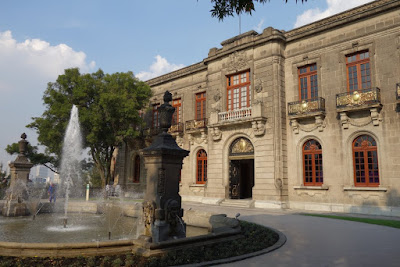 More than a year ago I wrote a post about this museum, detailing the history of the castle and showing some of its displays.  Chapultepec Castle is also a showcase of art.  Not only does it contain many historic paintings, but some of Mexico's greatest 20th century artists were commissioned to adorn the walls with murals portraying the nation's historic events. So today I will show you some of the art within Mexico's premier history museum.

As you enter the museum, be sure to look up.  The ceiling of the entrance is covered with this dramatic mural.  I posted a photo of this painting before, but it is so stunning that I will show it again.  Unfortunately, I do not know the name of the artist who painted it.  So if any of my readers know his name, let me know.

UPDATE:  Kim, the author of the blog "El Gringo Suelto" told me that the artist who painted the mural was Gabriel Flores (1930-1993), a well known painter from Guadalajara.  ¡Gracias, Kim! 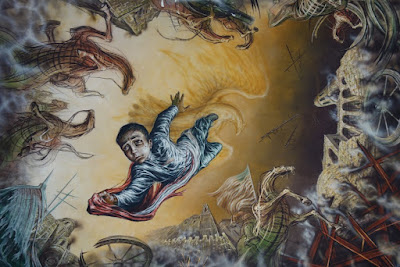 As I have written before, Chapultepec Castle was once the location of Mexico's military academy and was the scene of one of the last battles of the Mexican-American War.  According to legend, one of the young cadets at the academy wrapped himself in the Mexican flag and jumped to his death rather than surrender to the U.S. army.

Another dramatic mural was painted by Jorge González Camarena.  It represents the conquest of the Aztec Empire by the Spanish.  In this painting an Aztec warrior, dressed in the uniform of the Order of Eagles, is killed as he attacks a Spanish soldier on horseback. 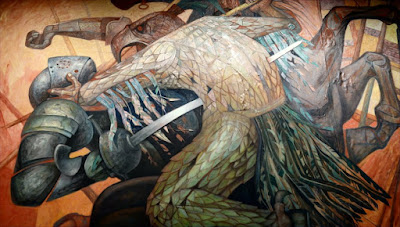 Sor Juana Inés de la Cruz was a 17th century nun who is regarded as the greatest poet of Mexico's colonial period, as well as a precursor of feminism.  This famous portrait of her was painted by Miguel Cabrera, the greatest painter of colonial Mexico. 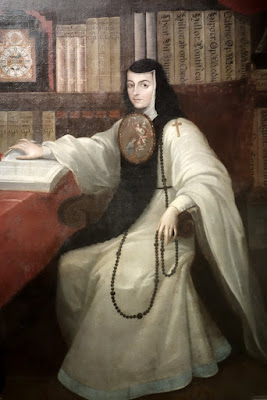 A noted 20th century artist from Mexico was Juan O'Gorman.  (He is best known for having designed the mosaic murals on the walls of the library of the University of Mexico.)  O'Gorman was commissioned to paint a large mural depicting Mexico's War of Independence from Spain.  A cast of thousands (well, at least of hundreds) of historical figures from the era are portrayed.  This is just a portion of the painting.  In the center is Miguel Hidalgo, the "Father of Mexican Independence". 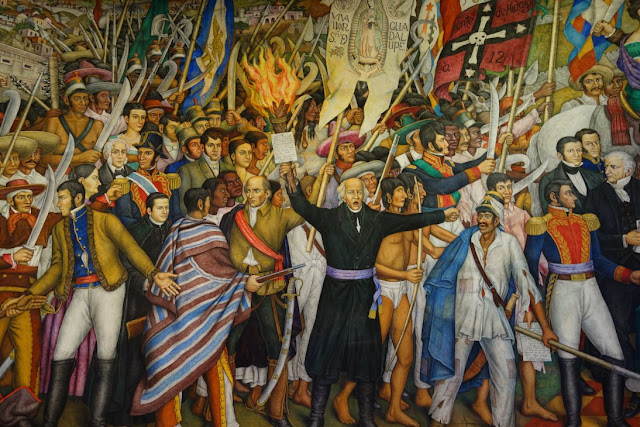 I don't know the name of the painter, but I liked this canvas which shows the Cathedral of Mexico as it appeared in the early 19th century. 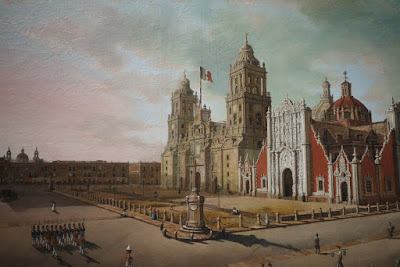 Mexico's national hero is Benito Juarez, the Zapotec Indian who became President of the nation, and who led the fight against the French invaders in the 1860s.  This mural by José Clemente Orozco celebrates the triumph of Juarez over the French imperialists. 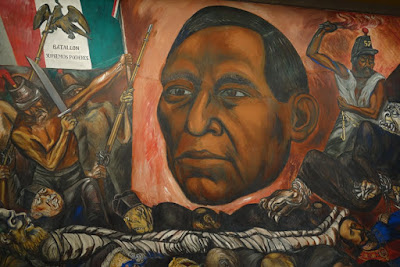 Juan O'Gorman painted another mural depicting the dictatorship of Porfirio Díaz and his overthrow in the Mexican Revolution of 1910.  Díaz ruled Mexico with an iron hand for over thirty years. 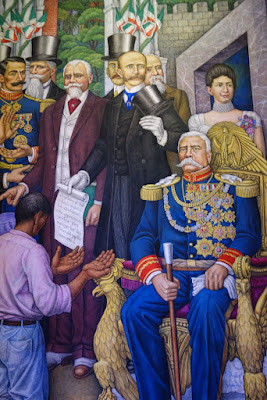 Although Díaz modernized the country and gave it a much need period of stability, the poor were oppressed at the expense of the upper class and foreign investors.  In the countryside the peasants were little better than slaves. 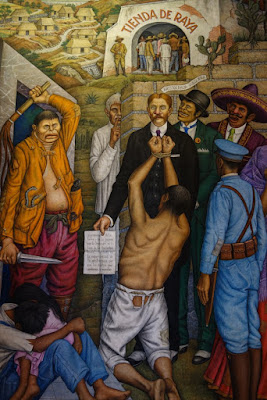 The Revolution of 1910 deposed Díaz and Francisco Madero was elected President. 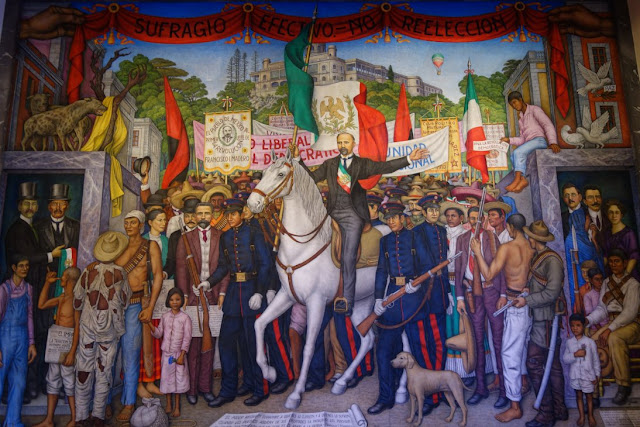 Madero is shown arriving in Mexico City in triumph.  However, forces were at work to undermine Madero's victory.  The two men at the left in top hats are U.S. ambassador Henry Lane Wilson and Mexican General Victoriano Huerta.  The two plotted a counter-revolution.  President Madero was arrested and murdered, and Huerta took control.  However Huerta was unable to bottle up the forces of revolution, and the country was to endure years of chaos.

This is only a sample of what is to be seen at Chapultepec Castle.
Posted by Retired Teacher at 10:07:00 AM