Much of yesterday, my first full day in Mexico City, was spent shopping.

The apartment where I am staying, the same place where I have stayed on the last several trips, has a kitchen.  It's rather small for doing any major cooking, but I usually prepare breakfast here each morning.  So I needed to do some grocery shopping.

Some time ago I wrote a post about the market that is held every Tuesday here in the Mexico City neighborhood of Condesa.  Actually it is properly referred to as a "tianguis", a word from the Aztec language which refers to an open-air market.  Each week several blocks of a street in the neighborhood are closed off, and vendors set up their stalls. 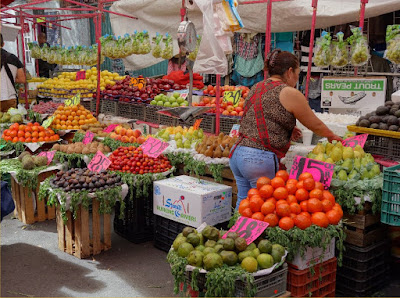 This "tianguis" is a great place to buy fresh fruits and vegetables.  This was my first stop today.  I bought things such as peppers and onions to mix with scrambled eggs.  I also bought some beautiful peeled white potatoes.  I'll use them to make some "home fries".

My second destination was Sumesa supermarket. 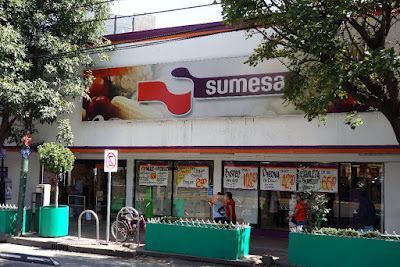 Although Mexicans still shop at the markets and "tianguis", the concept of the supermarket has become just as popular, particularly among the middle class.  For things like canned goods, bottled water, eggs, and cartons of milk or juice I go to the nearby Sumesa.  Sumesa is one of numerous chains in Mexico.  If you divide the name, "Su mesa" means "Your table",  I am really not that fond of "Sumesa", or at least of this particular store.  The aisles are narrow and congested.  Since it is only a couple blocks away from my apartment, it is the most convenient place for me to go shopping if I have to lug a heavy bag of groceries.

After putting away my purchases, I took off again for some different shopping.  I walked a mile up Insurgentes Avenue to the Zona Rosa neighborhood to Mix Up, one of the city's largest music and video stores.  I wrote some time ago that I introduced my friend Alejandro to the BBC series "Downton Abbey".  He is now a big fan, and I have bought him the first four seasons at Mix Up.  So, today I returned to the store to see if they had Season Five.  They had one copy left, so I snatched that up for Alejandro.  Of course, I could have bought it in the United States, but the version sold at home does not have Spanish subtitles.  Alejandro speaks English well enough that he would understand most of it, but he has in turn introduced the series to his mother.  She also has enjoyed it enormously, but since she does not speak English, the subtitles are a must.

Yesterday was the Day of the Dead, and one of the favorite treats for children at this time of year are candy skulls made of sugar.  As I was walking back to the apartment, I passed a candy shop that had a display case full of a variation on that traditional sweet.  These skulls were made of chocolate. 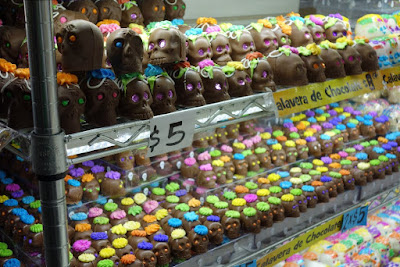 I didn't buy any chocolate skulls, but I was nearly back to the apartment when I was approached by three young ladies who were selling homemade cupcakes.  They said that they were students at a gastronomy school.  Even though the cupcakes were very pricey... 40 pesos each... I bought a container of a half dozen. 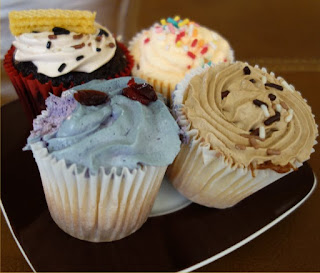 Yes, I had already eaten two of them by the time I took this photo!

As I continued on to the apartment, I was calculating into dollars the price that I had paid.  "Fifteen U.S. dollars for a half dozen cupcakes!!  Those girls really took me for a gringo sucker!"  And I was angry at myself for falling for their sales pitch.

Once I reached the apartment I tried one of those high-priced cupcakes... and my anger abated.  It was without a doubt the best cupcake I have ever eaten.  Usually cupcakes look very pretty but don't taste that great... the frosting is sickeningly sweet and the cake is desert dry.  This frosting was flavorful and not too sweet, and the cake portion was so moist.  That evening I showed Alejandro the cupcakes, and, when I told him how much they cost, he made a face.  But then he tried one and said, "This is really good!"

Yes, the young ladies probably charged this gringo an inflated price.  But the students definitely have culinary talent.  I figure that I made a donation toward their tuition, and I'm OK with that.  In fact, if I see them again on the street I will probably buy another batch of cupcakes.  However I will ask, "Since I'm a repeat customer, may I have a discount price?".