The Route of St. James

During my recent trip to Spain I mentioned that the cities of Burgos and León are major stops along the "Camino de Santiago"... referred to in English as the Route of St. James or the Way of St. James.  In the Middle Ages it was one of most important pilgrimages that a devout Christian could make, along with a journey to Jerusalem or Rome.

For those readers who are unfamiliar with the "Camino", I thought I would write in more detail about that route.

First of all, in Spanish, St. James the Apostle is called Santiago.  This comes from the old Spanish name for James... "Iago".

The pilgrimage route has many branches, but the main path extends over 450 miles.  It begins in southern France, crosses the Pyrenees Mountains, and then extends across the breadth of northern Spain to the shrine of St. James in the city of Santiago de Compostela.

Today the route attracts up to 200,000 people each year... not just religious pilgrims, but also hikers and tourists seeking a unique travel experience trekking across the scenic Spanish countryside.  It takes about a month to travel the entire path, although many choose to hike just a portion of the route.  Basic, inexpensive accommodations for pilgrims are located at intervals of about fifteen miles.

The story behind this route is a fantastical legend with no historical documentation.  Even the Vatican admits that it may have no basis in fact.

According to the legend, the Apostle James made a missionary journey to Hispania (as Spain was known in Roman times), and was responsible for the first converts to Christianity there.  James then returned to Judea where he was arrested and beheaded.  His body was recovered, with his head miraculously restored, and taken to a ship made of stone and manned by angels.  The ship transported his body across the Mediterranean, through the Straits of Gibraltar, and up to the northwestern corner of Spain.  There the saint was buried.

Fast forward nearly eight centuries.  The tiny Christian kingdom of Asturias in northern Spain was struggling to repulse the Moorish invaders.  In A.D. 812 a hermit saw a bright star hovering over an empty field.  There the long forgotten grave of St. James was discovered, and a shrine was built on the spot.  A few years later, during a battle between the Christians and the Moors, the saint was seen descending from heaven on a white horse and slaying the Moors by the thousands.  Henceforth, St. James was known as Santiago Matamoros (St. James the Moor Slayer).  During the centuries of the Reconquest, the Christian Spaniards fought under the banner of Santiago, and James became the patron saint of Spain. 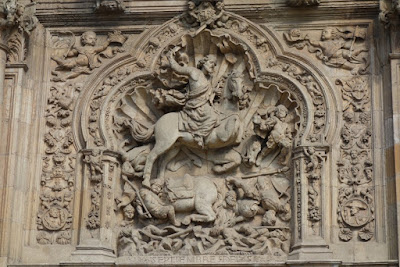 St. James depicted as the Moor Slayer on a church in León
The church built over the saint's supposed grave became a place of pilgrimage.  The town of Santiago de Compostela grew up around the shrine.  ("Compostela'  derives from the Latin for "Field of the Star" or alternately from the Latin for "burial ground".)  By 1075 work began on a cathedral on the site.  The original Romanesque cathedral saw later Gothic and baroque additions.
﻿
Pilgrims will also carry on their person a scallop shell.  This pilgrim in León had a shell attached to his backpack. 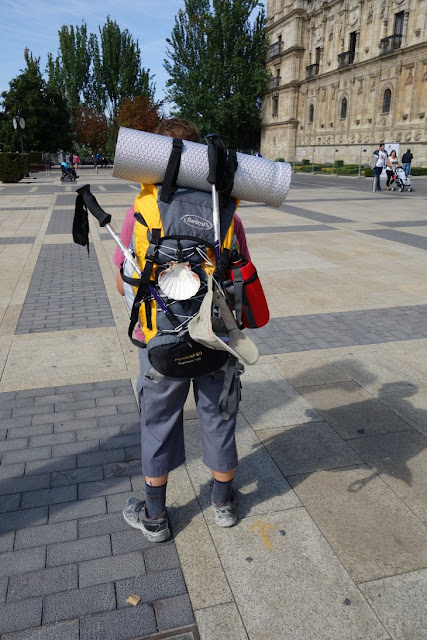 .
I am not a religious person, but I do admit that the idea of hiking the "Camino" is intriguing.  However, at my age, I don't think trekking fifteen miles a day for a month is a possibility.  I have never been to Santiago de Compostela, but it is definitely on my list of places to visit on a future trip to Spain.
Posted by Retired Teacher at 11:02:00 AM