I spent the day visiting the artistic marvels and historic sites of the city of Burgos.

The number one place to see is the Cathedral, one of the most beautiful in Spain and a UNESCO World Heritage Site.  By the thirteenth century, Burgos was becoming an important city as the capital of the kingdom of Castille, and as a stop along the medieval pilgrimage Route of Santiago it was receiving visitors from all over Europe.  King Ferdinand III of Castille (San Fernando) decided to replace the old Romanesque style cathedral with a grander church in the new Gothic style that was all the rage in France.  Construction began in 1221, and although it was in use as a place of worship in only nine years, work on the structure continued until 1567. 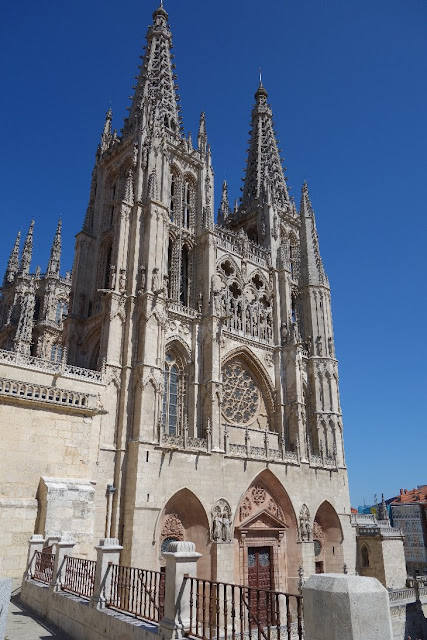 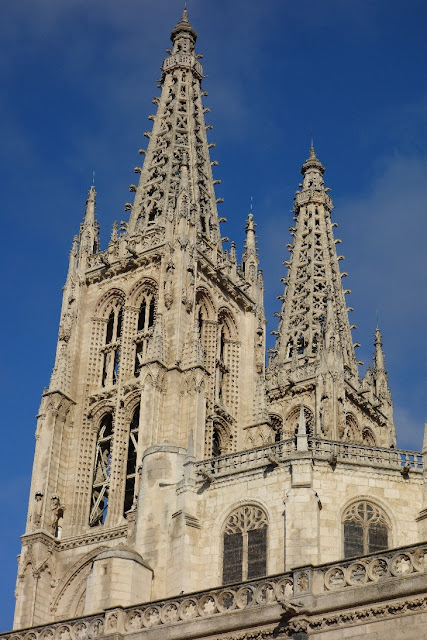 I spent a couple hours exploring the interior of the cathedral.  I may be criticized for saying this, but, frankly, I found the interior of the Burgos Cathedral to be more impressive and interesting than Notre Dame in Paris.  Of course Notre Dame is an incredible work of architecture, but I found its interior to be rather dark and gloomy.  The Burgos Cathedral is brighter.  Much of the interior decoration was added later in Renaissance and Baroque styles and is incredibly extravagant.

Here are a few highlights of the church interior...

The enormous main altarpiece is dedicated to Santa María and is covered with polychrome carvings depicting the life of the Virgin. 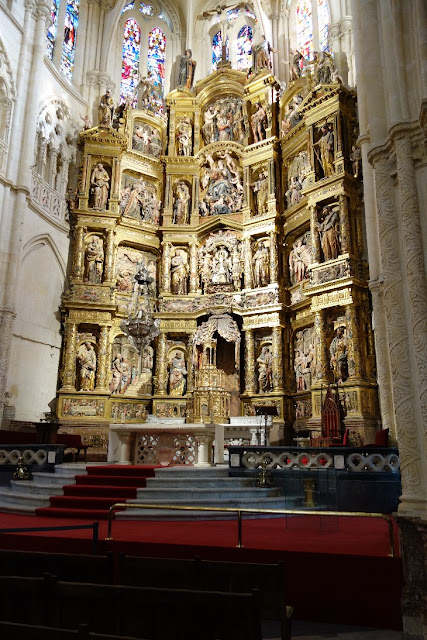 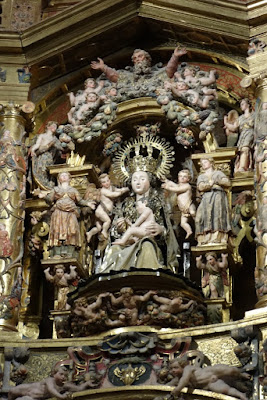 At the crossing look up at the beautiful dome which was the last addition to the structure. 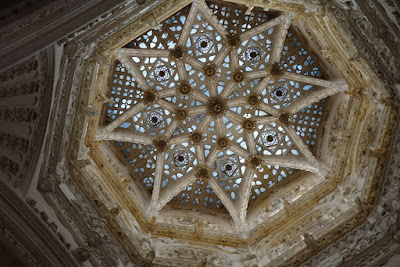 Directly beneath the dome is the burial place of the famous medieval warrior El Cid and his wife doña Jimena. 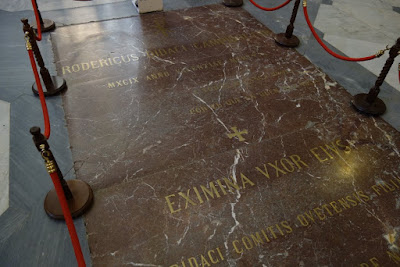 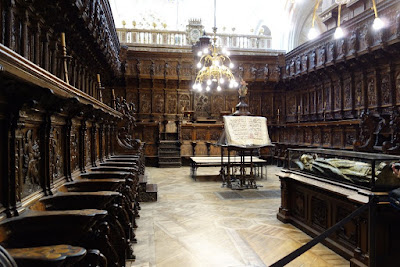 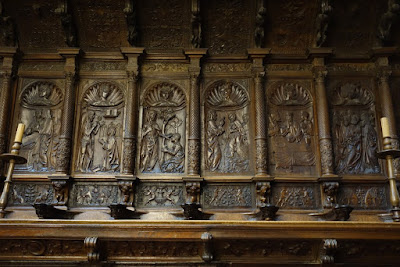 The Cathedral was built at the foot of a hill on land that was leveled.  As a result the street on one side of the church is at a higher level.  To create an exit onto that street, this elaborate staircase, known as the Golden Staircase, was built.  Later it was used as the model for the staircase of the Paris Opera House. 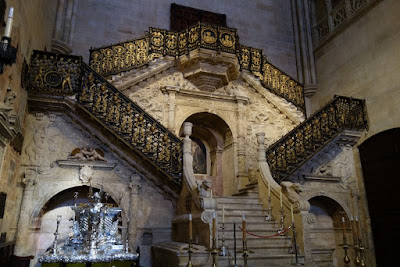 There are fifteen side chapels, many of them contain very ornate altarpieces. 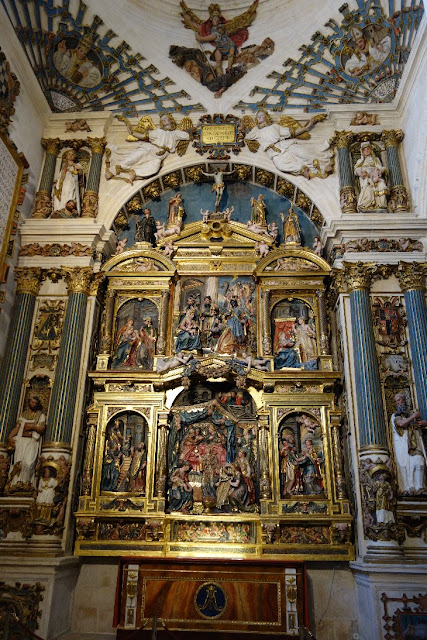 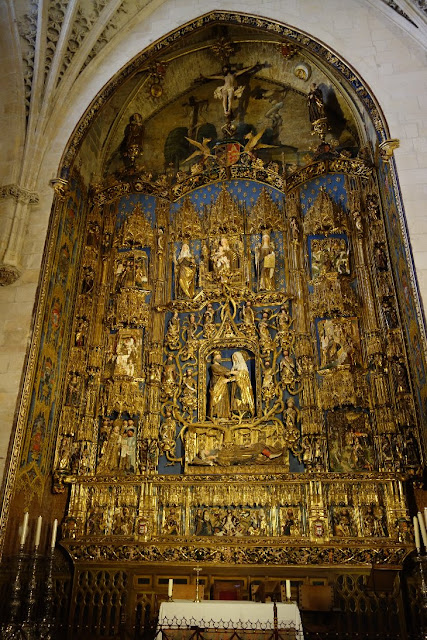 The ceiling of the sacristy. 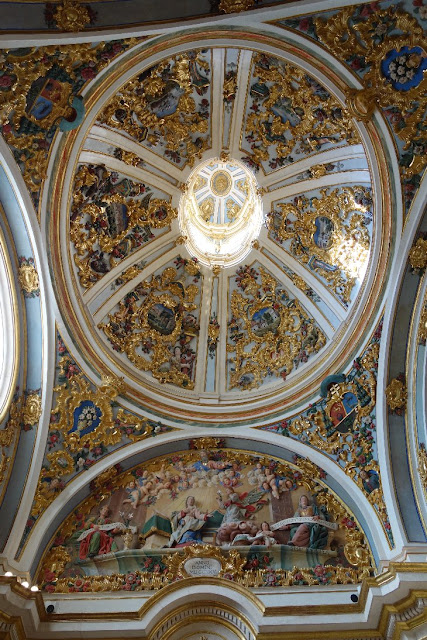 A view of the Cathedral illuminated at night. 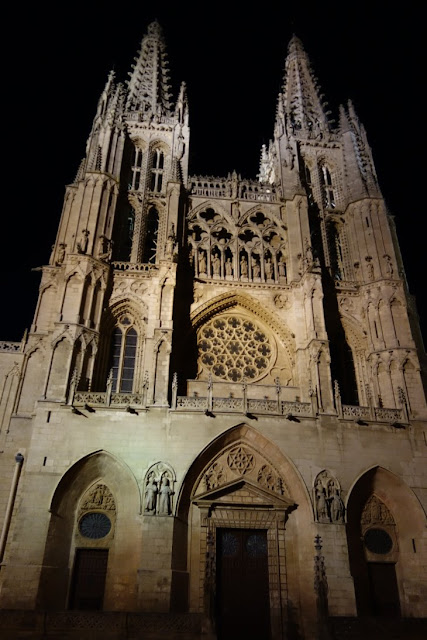 Next to the Cathedral is the little church of San Nicolás. The exterior is rather simple... 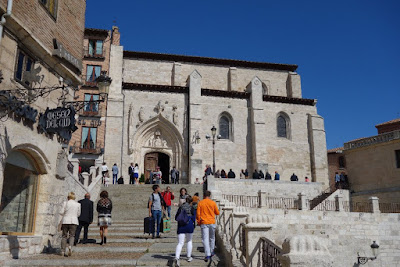 but the interior contains a huge altarpiece carved from stone. 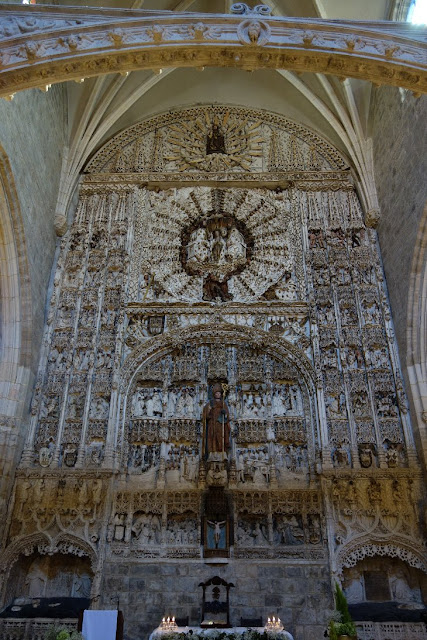 In the afternoon after lunch, I climbed the hill at the edge of the Old Town to visit the ruins of the Castle of Burgos.

The castle was begun in 884 to defend the frontier between the Christian territories to the north and the Moorish territories to the south.  It also provided protection so that Christians could settle in the area previously occupied by the Moors.  Thus the city of Burgos was founded as a small settlement huddled around the fortress.

In the thirteenth century, King Alfonso X (known as Alfonso the Wise) built a palace within the castle walls.

During the Napoleonic Wars in the early 1800s, the French army occupied the castle and added to its defenses.  When the British under Lord Wellington attacked, the French retreated, but not before blowing up the castle.  All that remains today are ruins. 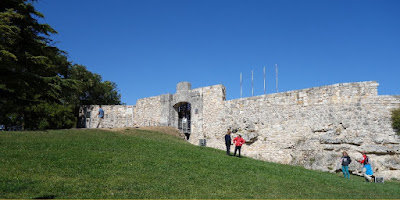 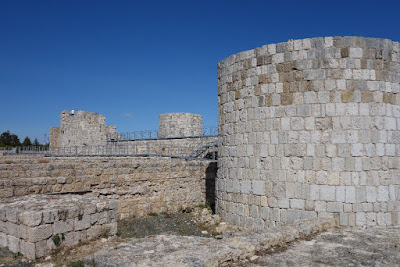 What makes the climb up the hill worthwhile are the views of the city below. 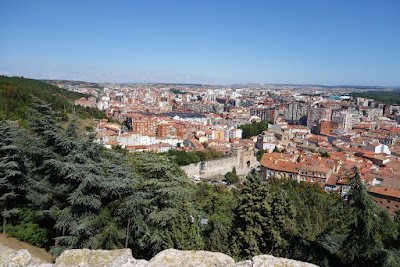 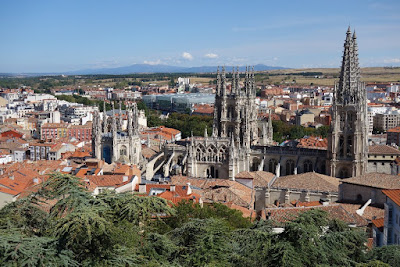