The Eclipse that Wasn't

I was hoping to attempt to photograph last night's much publicized eclipse.  A couple years ago I managed to get some half-way decent pictures of a lunar eclipse while I was in Mexico.

Although the weather forecast was not promising, my hopes rose when yesterday turned out to be a pleasant, mostly sunny day.  However, in the late afternoon the clouds rolled in.

In the early evening I was on the phone with Alejandro.  I asked him if he was going to be able to see the eclipse in Mexico City.  He said, "No".  It was cloudy there and the forecast called for rain all night.  While we were talking I stepped outside.  My hopes rose when I saw that there were breaks in the cloud cover.

I went outside with my camera several times between 9 and 11 PM.  The breaks were nowhere near where the moon was rising in the east.

So, I have no photos of the "red moon".  All I got was this picture of the moonlight filtering through a thin spot in the clouds. 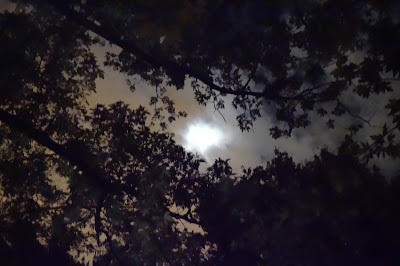 Did any of my readers have better luck viewing the eclipse?﻿
Posted by Retired Teacher at 8:28:00 AM