Art on the Bridge

For a number of years I was a member of the Berea Fine Arts Club, an organization based in the neighboring city of Berea, Ohio, which encourages local artists.  Each year the club holds several shows at which members and other artists can display and sell their work.  I was participating in at least three shows each year.  Now and then I would sell a painting, but I would always sell quite a few smaller objects such as hand-painted Christmas ornaments and cards.

When I started spending more time traveling, I left the club, because I didn't have the time to contribute to the work of the club or to participate in the shows.

One of the shows which the club holds every autumn is Art on the Bridge.  The event is held in my hometown of Olmsted Falls.  Artists set up their displays of art on the covered bridge in the center of town as well as along the path leading to the bridge.  Yesterday I went to see the show. 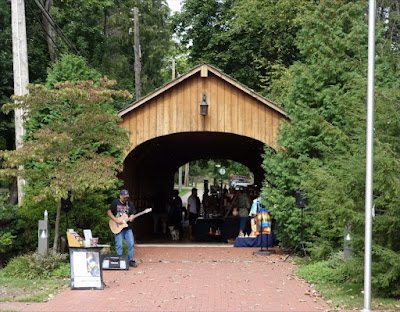 There are in Ohio many covered bridges dating from the 1800s.   This bridge, however, was built in the 1990s to enhance the picturesque atmosphere of Olmsted Falls.  (The northeastern corner of Ohio where I live is known as the Western Reserve.  After the American Revolution this area was set aside for war veterans from the state of Connecticut.  As a result there are many towns here that have a "New England" feel, and Olmsted Falls is a prime example.) 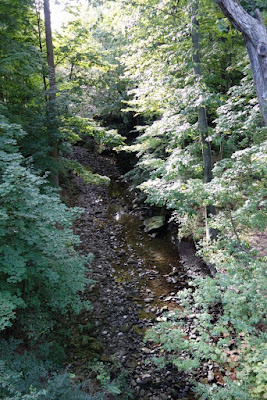 (Looking down from the bridge at the park below)
More the a dozen artists had set up for the show, and there was a variety of artwork...  paintings, photography, pottery, wood-carvings, jewelry, etc. 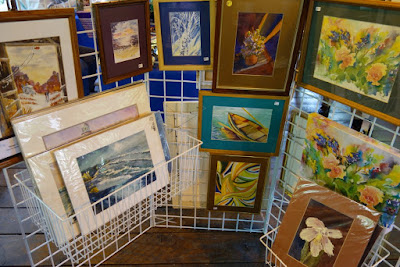 Water color paintings done by a friend of mine who is a long-time member of the club.
I had a chance to chat with members that I know from my time in the club.  The weather was very cooperative... mostly sunny with warm temperatures.  It was a very pleasant way to spend a Sunday afternoon!﻿
﻿
Posted by Retired Teacher at 11:04:00 AM