The biggest tourist attraction in Munich is the famous beer hall, the "Hofbräuhaus".  The place was established in 1583 as a brewery for the Bavarian royal family, the Wittelsbachs.  (The name in German means House of the Court Brew.)  In the 1800s, the brewery moved to the outskirts of Munich, the building became solely a beerhall / restaurant, and you didn't have to be royalty or a VIP to enter. 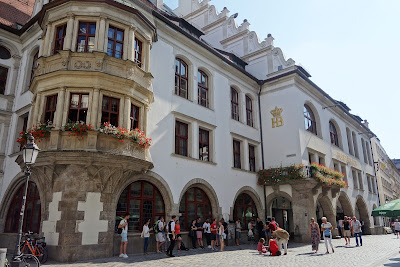 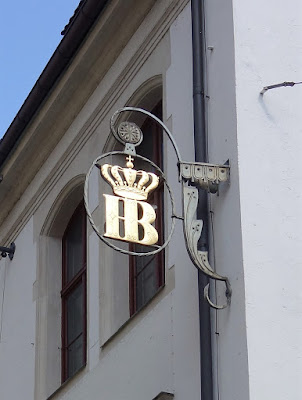 The royal emblem of the Hofbräuhaus

Even though I figured that the place was a tourist trap, I went in for lunch.  (Of course, there is a mandatory gift shop at the entrance, and, yes, I bought a Hofbräuhaus tee-shirt as a gift for Alejandro's dad.)  You enter through the main beerhall.  The vaulted ceiling is decorated with folk art.  There are long tables that are shared by the patrons.  Some tables are reserved, either for tour groups or for local regulars.  The regulars even have their own beer steins set aside for them on racks.  It was still early in the afternoon, and the "oom-pah" band was not yet playing. 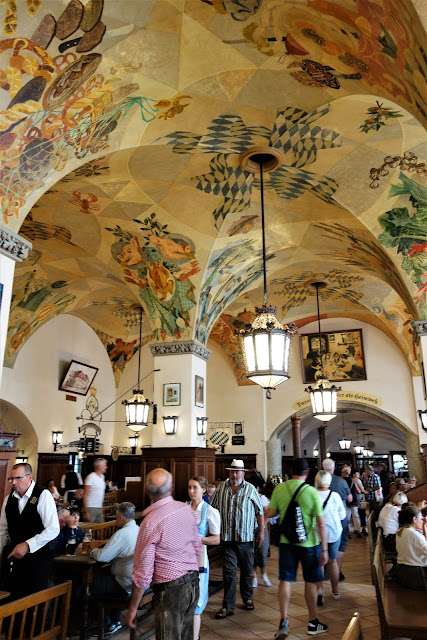 In the courtyard there is an outdoor dining area. 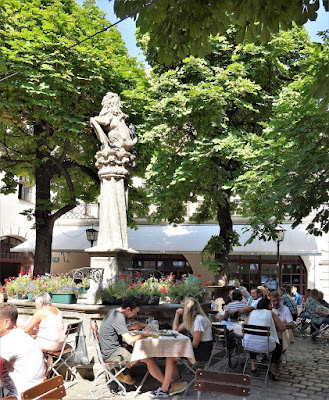 I opted to go upstairs to a terrace where there were tables available. 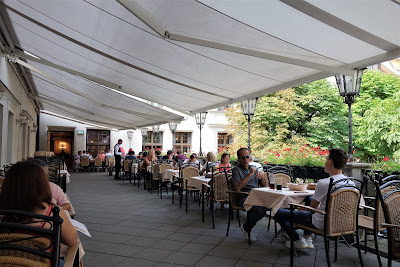 It wasn't really expecting much in the way of fine dining from such a touristy place, but I was pleasantly surprised.  I ordered a relatively light entrée, potato patties filled with a swirl of mushroom remoulade and serve atop ratatouille.  It was very tasty. 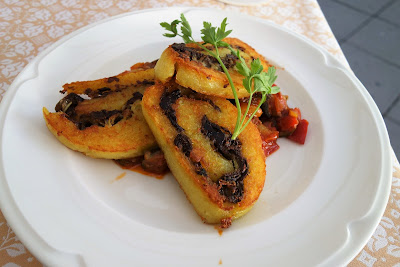 My dessert, on the other hand, was anything but light.  I ordered a traditional dish called "Kaiserschmarm", which means the Emperor's Mess.  It was supposedly the favorite dessert of Emperor Franz Josef of Austria. 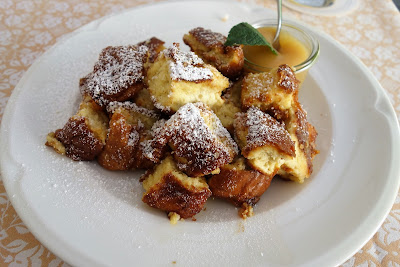 It consists of shredded pieces of thick, sweet pancakes, dusted with powdered sugar and served with apple sauce.  As you see if was as big as my main course.  It was very good, but definitely very heavy.

As I left the restaurant, the band had begun to play downstairs in the beer hall.

It may be a tourist trap, but it was a pleasant, worthwhile tourist trap.
Posted by Retired Teacher at 8:28:00 AM