Mexico's Independence Day, September 16th, is one holiday which is never changed to make a long weekend.  However, since the 16th falls on a Monday this year, as I write this Mexicans are heading home from work and looking forward to a "puente", their term for a three day weekend.

Last Sunday evening, my friend Alejandro and his family went to the Zócalo, Mexico City´s main plaza, to see the Independence Day decorations.  The square was crowded with people, but not nearly as many people as will be there this Sunday.  On the eve of Independence Day the President of Mexico appears on the balcony of the National Palace, and rings the bell which was rung 209 years ago initiating Mexico´s fight for freedom from Spain.

Here are some pictures that Alejandro sent me of the holiday lights.

The bell represented in lights is the bell which Father Miguel Hidalgo rang in the wee hours of the morning on September 16, 1810.

The eagle and the serpent, the emblem of Mexico 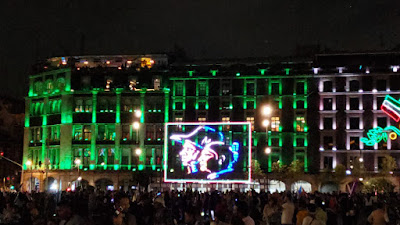 The two men pictured in lights are Ignacio Allende and José María Morelos, two other heroes of the War of Independence.

And finally a video which Alejandro took...


To my Mexican readers, happy Independence Day, and enjoy your weekend!
Posted by Retired Teacher at 7:14:00 PM