I have written here a couple of times about my friend Irma.  She was born and raised in Jalapa, the capital of the Mexican state of Veracruz.  I have known her since my college days when her late husband was one of my Spanish profs.  She lives in a condo here in Ohio just five minutes away from my house.  Yesterday she invited me to her place for dinner... and, of course, the menu was Mexican.  Since I am leaving again for Mexico in a couple days, it was a prelude to the food which I will soon be enjoying once again.

Irma also invited my former neighbor Holly.  Holly lived next door to me for many years until she recently moved and bought a condo in the same building as Irma.  Irma had previously met Holly at a couple parties at my place, and now that they live in the same building, they have become good friends. 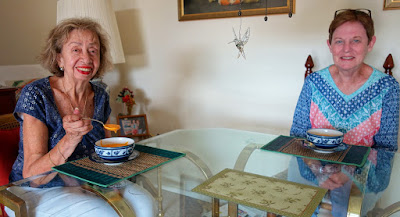 Dinner began with a very tasty cream of carrot soup. 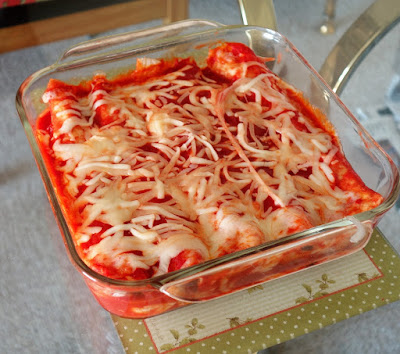 For the main course Irma made a casserole of enchiladas.
It was accompanied with salad, green beans, and "frijoles refritos" (refried beans).

It was a lovely evening of good food and good company.  It is always great to be with Irma, and it was a treat to see my former neighbor, Holly.   At the end of this month Irma will also be heading to Mexico to visit her nephew who still lives in the old family home in Jalapa.  I am keeping my fingers crossed that I will be able to make a trip from Mexico City to Jalapa (about four hours away) to visit her there.