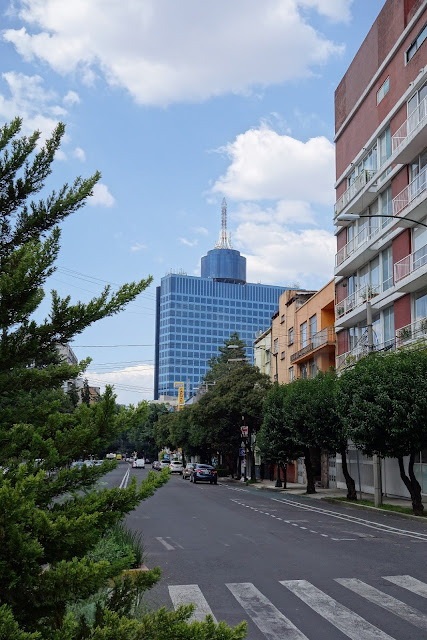 On Tuesday, I left Alejandro's house and went to the condo which I rent in the Mexico City neighborhood of Nápoles.  I spent several hours taking care of business... organizing the few things that I had to unpack, going to the bank to pay bills, calling the cleaning lady to let her know that I had returned, and getting my laptop set up and ready to continue blogging.

By then it was time to go out for some lunch.  I always tell people that there is so much more to Mexican cuisine than tacos.  Nevertheless, taco joints (and we are NOT talking about Taco Bell) are ubiquitous in Mexico City.  I used to frequent a franchise of a chain called "Taquearte" which is located just a block away from my apartment.  But on my last visit there I was a bit disappointed.  They no longer had on the menu the bean soup that I liked, and it seemed that they were being skimpy with the amount of meat that they served.

So I decided to walk another block and try out yet another Mexico City taco chain, "El Huequito". 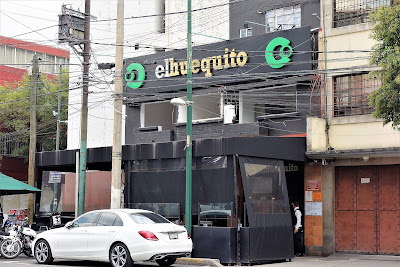 The word "huequito" means "little hole".  According to their website, when they opened their first location, people referred to it as a "huequito".

When I entered, I was immediately impressed with the service.  The waiter came up and offered me sanitizer for my hands... not a bad idea when you are going to be eating with your hands.  I ordered an "agua" of lime with honey to drink.  It wasn't as good as the very refreshing cucumber and lime that I would always order at "Taquearte".

They didn't have bean soup (sopa de frijol) but they did have a "sopa azteca" (another name for tortilla soup) which was quite good.

For comparison's sake, I ordered what I usually order at "Taquearte"... an "alambre". 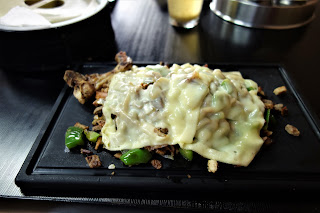 An "alambre" is a pile of grilled meat, onions and bell peppers.  (I ordered it with cheese.)  A basket of tortillas is served with your "alambre".  You take a tortilla in your hand and scoop up a handful of the "alambre".  Voila, you have a taco.  There is also a selection of nine salsas, ranging from very hot to mild for you to spoon onto your taco.  And, of course, there are limes so that you can squeeze some juice on it.  I am not really sure that the "alambre" here is better than at "Taquearte", but the serving is definitely larger.  It is something that could be shared by two people.