Alejandro didn't have to work on Tuesday (May Day is a national holiday), so we went out for a late breakfast at "El Bajío", a restaurant chain specializing in traditional Mexican cuisine.  One of their restaurants is a few blocks away from my apartment. 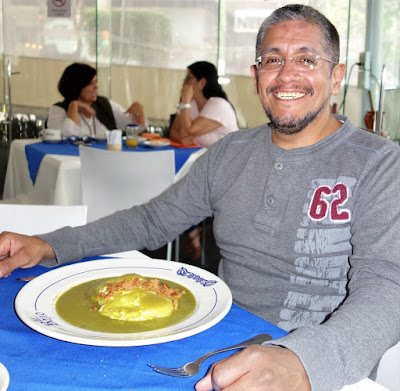 The eggs were atop "picadas", a larger version of "sopes", thick, fried patties of corn dough.  They were served with frijoles, chorizo and squash blossoms, and a sauce made with poblano peppers and "acuyo" (an herb also known as "hoja santa").

I had a "huarache".  A "huarache" is similar to a "picada" or "sope", but it has a large, oblong shape.  It gets its name from the fact that it looks like the sole of a "huarache" or Mexican sandal.  In addition to the usual toppings of beans and salsa, this "huarache" was covered with "carnitas", tender bits of slowly simmered pork. 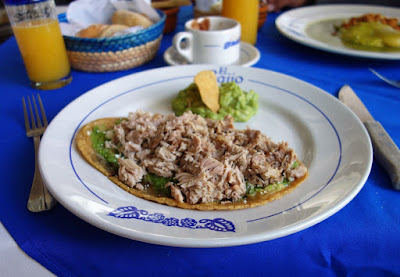 I had two cups of hot chocolate (you can get a refill as you would with a cup of coffee), and Alejandro had pineapple "atole".  "Atole" is a hot beverage made from corn flour.  I don't particularly care for it, but it is very traditional and very popular in Mexico.  Both of us also had orange juice and sweet rolls.

It was a delicious breakfast, and we didn't need to eat again until we had a light, evening supper.