Monday I made a quick trip downtown to the Mayordomo Chocolate shop / restaurant.  Mayordomo is a chocolate company in Oaxaca, and they are one of the few Mexican chocolate companies that have not been bought out by foreign companies such as Nestle.  They have a shop in the historic center of Mexico City that I discovered on my last trip.  I wanted to return to buy a couple boxes of the "chocolate para mesa" that is used for making traditional hot chocolate.

My plan was to make my purchase and then head right back on the subway which is located just a couple blocks away.  But when I got there it was hard to resist having lunch in their restaurant.  I ordered a cup of hot chocolate and Oaxacan tamales.  The tamales must be very popular for breakfast since the waiter had to go ask the kitchen if there were any left.  Fortunately there were. 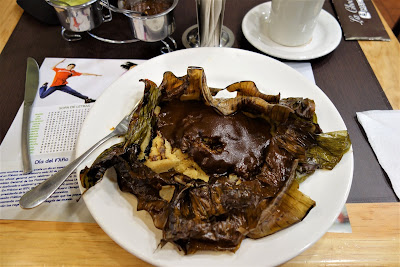 The tamales are made of corn "masa", stuffed with chicken, wrapped in banana leaves and steamed.  Before serving, they opened the banana leaves and ladled Oaxacan "mole" over the tamales.  It may look like a mess in the photo, but it was yummy.  Chocolate is one of the ingredients in the "mole", but only one of many ingredients.  Don't think that it tastes as if Hershey's syrup had been poured over the tamales!