A Visit to Ohio's Past

Yesterday I visited Hale Farm and Village, an outdoor history museum located in the Cuyahoga Valley National Park between Cleveland and Akron.  It portrays life in Ohio's Western Reserve in the early 1800s.  (The Western Reserve was the northeastern corner of what is today the state of Ohio.  The land was claimed by Connecticut, and many of the towns and cities there, including Cleveland, were founded and developed by the Connecticut Land Company.)

The museum is owned and operated by the Western Reserve Historical Society.  In 1958 they acquired the farm and homestead of Jonathan Hale, a Connecticut settler who came to Ohio in 1810.  His house, built in 1825, was one of the first brick buildings in the area.  It has been restored and furnished with period antiques. 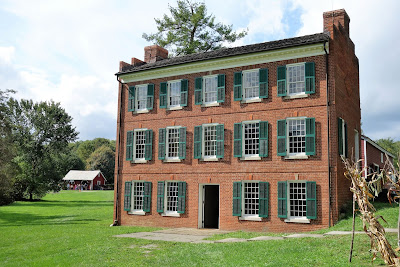 Since then, the historical society has rescued historic northeastern Ohio buildings in danger of demolition, and has transported and rebuilt them at this site.  The result is a "village" depicting life in early Ohio.

This log cabin was built in 1805, and was transported here from its original location in what is today the city of Akron. 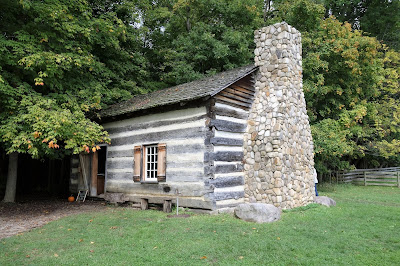 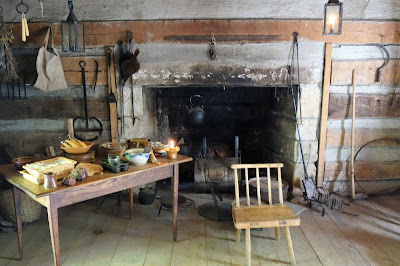 This cabin was built in 1816.  It was originally a farmhouse, but was later used as a one-room school house.  (It was common for early schools to be housed in abandoned cabins.) 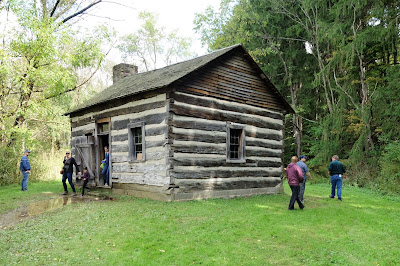 The "schoolmarm" is holding a copy of a McGuffey Reader.  The McGuffey Readers were the first primary school textbooks published in the United States.  They were written by an Ohio educator, William McGuffey.  More than 120 million copies of the readers were published. 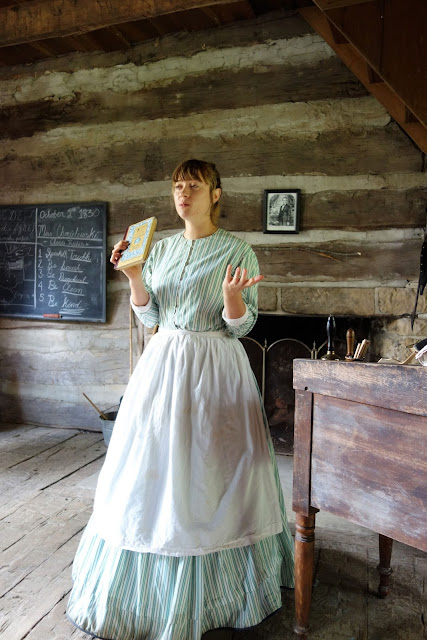 Facing the village green is a church which was a Baptist Meeting House built in 1852 in Streetsboro, Ohio. 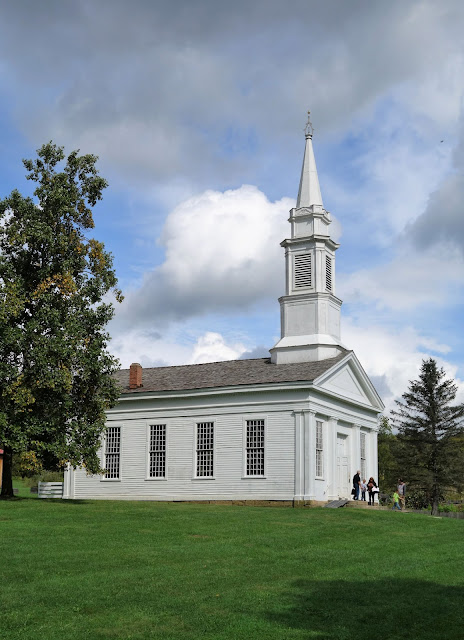 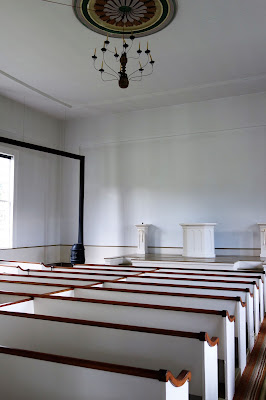 This house is known as a "saltbox" house, and was built in 1830 in Richfield, Ohio.   This style of house got its name because its shape resembled the boxes in which salt was stored.  The style was typical of New England and reflects the influence of Connecticut settlers in Ohio. 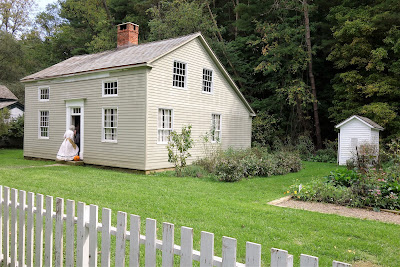 This house is known as the Goldsmith House, because it was designed by a noted Ohio master builder, Jonathan Goldsmith.   This home was built in 1831 for a wealthy family in Willoughby, Ohio. 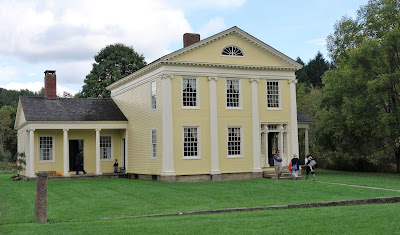 Goldsmith was known for his beautifully carved doorways. 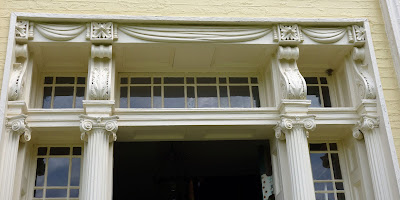 The furnishings inside reflect the life of a well-to-do family of the era.  The formal parlor, where guests were received, is painted yellow.  In those days, yellow was the most expensive color of paint. 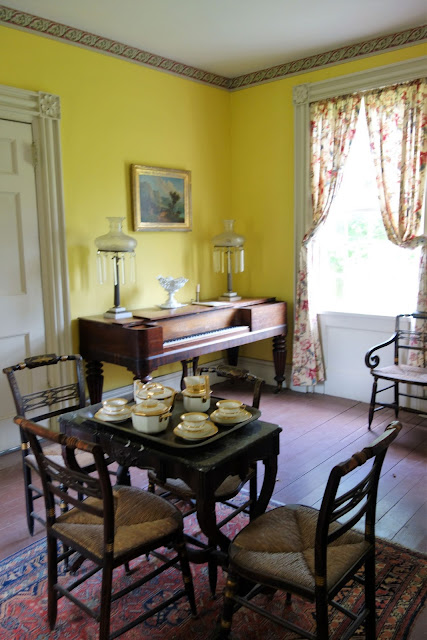 Throughout the village, there are interpreters who demonstrate nineteenth century crafts and activities. 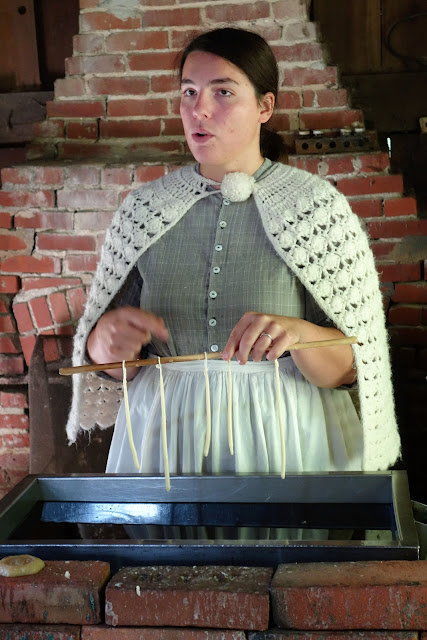 She was making candles from beeswax.  Tallow (animal fat) was also used, but the downside of tallow was that they attracted rats. 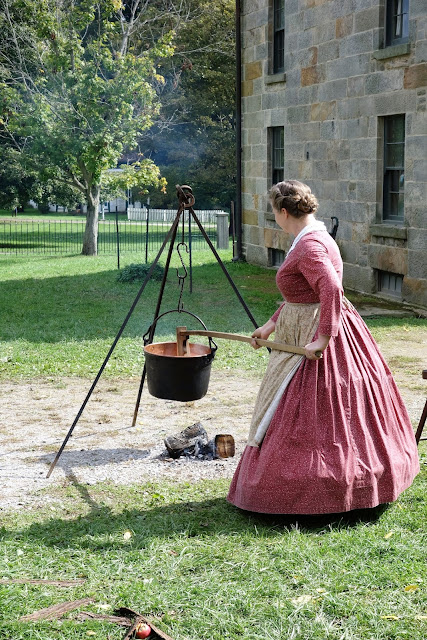 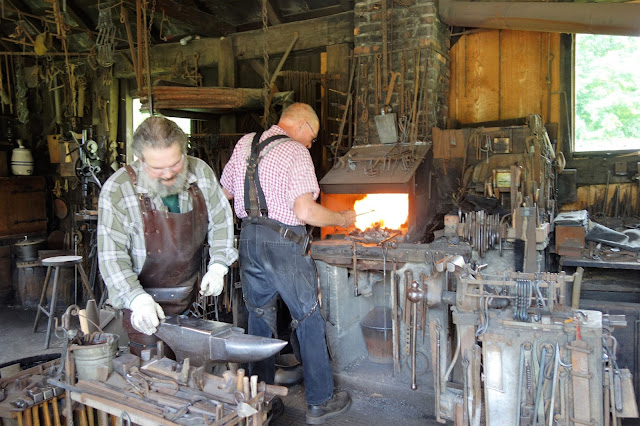 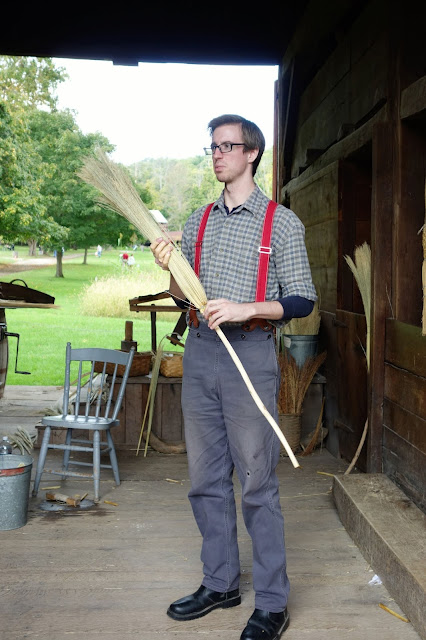 My visit to Hale Farm and Village was fun and informative!