It Was So Much Fun, I Voted Twice 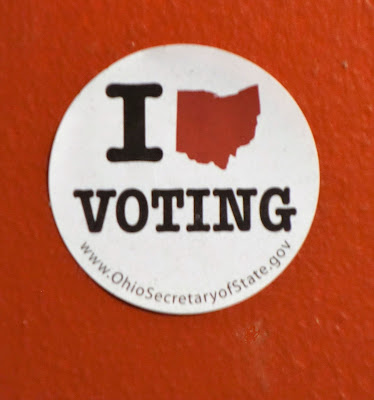 Today was the first day of early voting in the state of Ohio.  Since I will be in Mexico on Election Day, I drove to downtown Cleveland to the Cuyahoga County Board of Elections to cast my ballot.  The place was much busier than on previous occasions when I have voted early.  I got the last space in the parking lot, and I had to wait in line for several minutes.

As for the title of this post, no, I did NOT commit voter fraud.  The place where I live in Olmsted Falls, Ohio, is in a small portion of one precinct which is in the school district of the neighboring city of Berea, rather than in the Olmsted Falls City School District.  Both Olmsted Falls and Berea City Schools have an issue on the ballot this November.  It wasn't until I got to the last page of the ballot that I saw the Olmsted Falls school levy.  I had received the wrong ballot!

I explained this to the lady that had given me my ballot, and she was very apologetic.  I told her that it was not a problem; that this was not the first time that this had happened.  I handed in my nearly completed ballot to be destroyed, and I was given the correct one.

So, I voted twice, but it was perfectly legal!