A Day Without the Internet

Yesterday afternoon, I was getting ready to leave for a Cleveland Orchestra concert.  (I'll write about that in my next post.)  Around 6:00 P.M., I checked my email before leaving the house, and discovered that I had no internet access.  I checked my (land line) telephone and there was no dial tone.  I went outside and saw that my telephone line was broken.  Half of it was lying in the front yard; the other half was dangling from the telephone pole across the street. 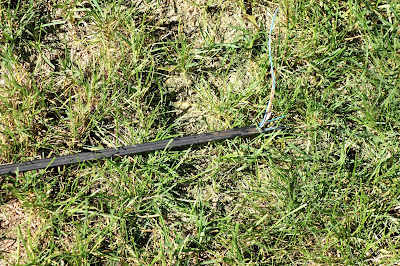 When I returned from the concert at around 10:30, I called the telephone company to report the problem.  The service representative said that someone would come to the house between 9:00 A.M. and 3:00 P.M. today.  At around one in the afternoon the repairman showed up.  I showed him the wire, and asked him how the cable could have been severed. My thought was that a squirrel might have been chewing on it.  He didn't think so.  He said that the cut was too clean, and that squirrels usually stop gnawing when they get to the copper wire.  He thought that a truck passing down the street might have snapped the wire.  "That would have to be an awfully tall truck," I said.  He told me that there have been incidents where a dump truck had not lowered its bed and had taken down wires.  But then why weren't the telephone lines all the way down the street snapped?  I will probably never know what happened, but the important thing is that the repairs were made and that I once again have telephone and internet service.
Posted by Retired Teacher at 10:29:00 PM