The Trip of a Lifetime

I have visited many wonderful places in my life, but without a doubt the most incredible trip that I have ever taken was one that I did way back in the summer of 1985.  I splurged and took a three week tour of Peru and Ecuador.  Generally I avoid guided tours.  I do not like being herded around like cattle with a group of tourists.  But on this trip I had private guides at each place on the itinerary, and I also had plenty of free time to explore on my own.

Of course, the place that I was most interested in seeing was Machu Picchu, the so-called "lost city of the Incas".   This remote Incan town was built around 1450 on a saddle between two mountains more than 1000 feet above the Urubamba River.  It was not a large city, but from its splendid architecture, it must have been a place of importance.  Archaeologists suggest that it might have been a retreat for the Incan emperor and his court.  Because of its location, the Spanish "conquistadores" never knew about the place, and it wasn't until 1911 that an American professor, Hiram Bingham, found it, and brought it to the attention of the world.  (It really wasn't a "lost city" however, since the locals knew about it all along.)

Back when I went there, Machu Picchu was much less developed for tourism.  Even today, visitors must take a train to get there (or hike for several days along the famous Inca Trail). Upon arriving at the train station in the valley below the ruins, they are transported in little buses up the twisting road to the archaeological site.  Back then there was only one small, government-run hotel at the site, so the majority of tourists took the morning train, spent a few hours at the ruins, and then caught the train back in the late afternoon.  Today there are numerous hotels, B&Bs and restaurants in the village that has grown up in the valley.  The number of visitors has grown enormously... it is the number one tourist destination in all of South America... and the sheer numbers pose a threat to the preservation of the site.

On the tour that I took, I was fortunate to have overnight accommodation at that one little hotel, so I had plenty of time to thoroughly explore this fantastic place in relative solitude. 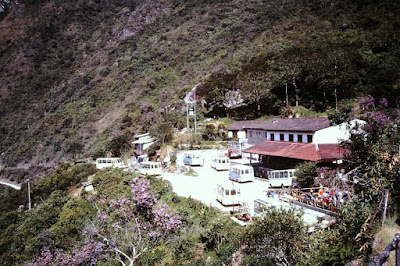 This is the hotel where I stayed.  It was only a few feet from the entrance to the archaeological site.  The place was simple, but clean, comfortable and modern (although the generator for electricity was turned off after a certain hour at night).  Notice the buses which transported visitors up from the train station. From what I have read, the hotel has been replaced by a luxury hotel which charges $1000 per night! As you enter the archaeological site, you first pass through the "agricultural section".  These reconstructed buildings would have been the homes of the farmers. 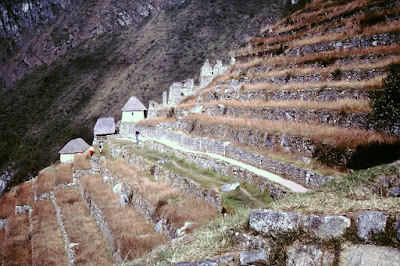 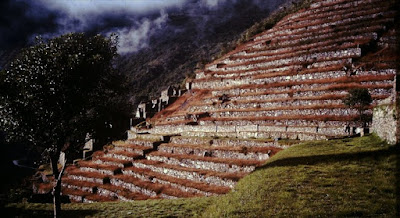 Next to those houses are magnificent terraces, climbing the mountainside, where the crops to feed the population were cultivated. 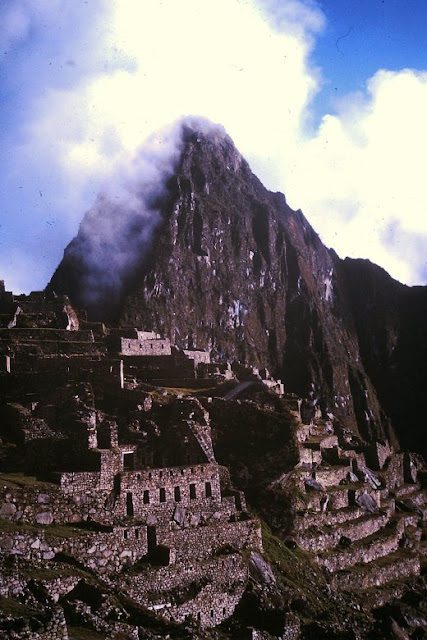 From there, you enter the "urban section" of the site.  The distinctive mountain peak rising above the ruins is called Huayna Picchu (The Young Mountain).

One half of the "urban section" appears to have been reserved for nobility.  Archaeologists assume this because of the fine quality of the stonework of these constructions. 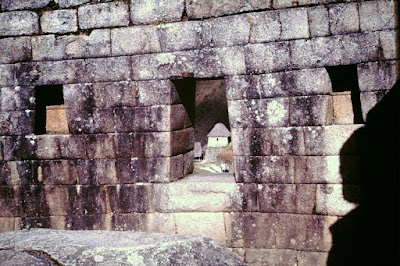 In this royal neighborhood is a structure which is thought to be the Temple of the Sun.  It has a curved wall similar to the Temple of the Sun in Cuzco, the Incan capital.  The stonework is of amazing quality.  The Incas had no iron tools to cut the stone, but the builders were able to fit the blocks together perfectly without mortar. 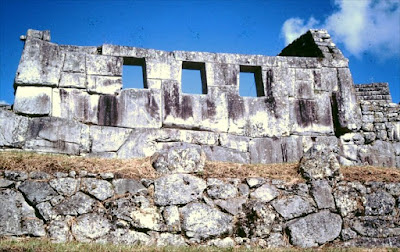 For obvious reasons this building is called the Temple of the Three Windows.  It may commemorate the myth that told that the founders of the Incan tribe emerged from three windows in the mountains. 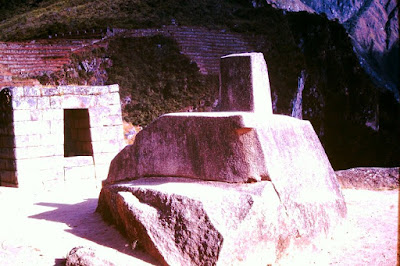 At the highest point of the royal neighborhood is this carving cut out of the sheer rock.  It is called the "Inti Watani"... "The Hitching Post of the Sun".  At the winter solstice, when the sun was lower in the sky, the priests performed a rite which supposedly tethered the sun lest it disappear.  Of course after that ceremony, the sun would gradually start to rise higher in the sky.  Very few of these "hitching posts" survive.  The Spanish destroyed most of them because they were a part the pagan religion of the Incas.

Some more photos of this fantastic place... 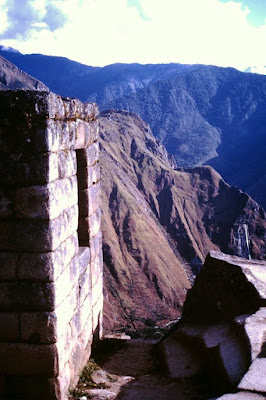 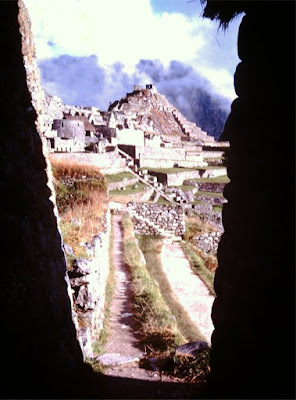 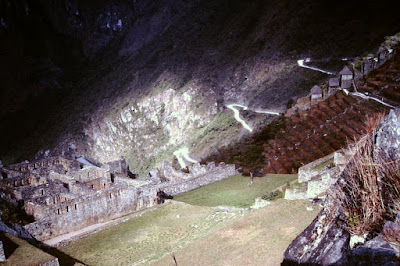 (In the background you can see the winding road which climbs up to Machu Picchu.) 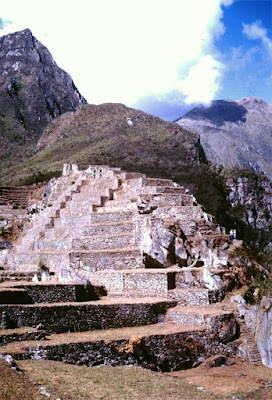 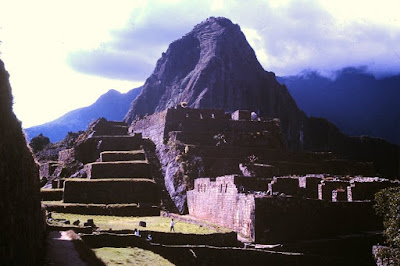 I spent several hours wandering around the ruins, but late in the afternoon it began to rain.  I went back to the hotel and took a short nap.  When I woke up, the rain had stopped, the sun was out, and this was the view from outside the hotel... 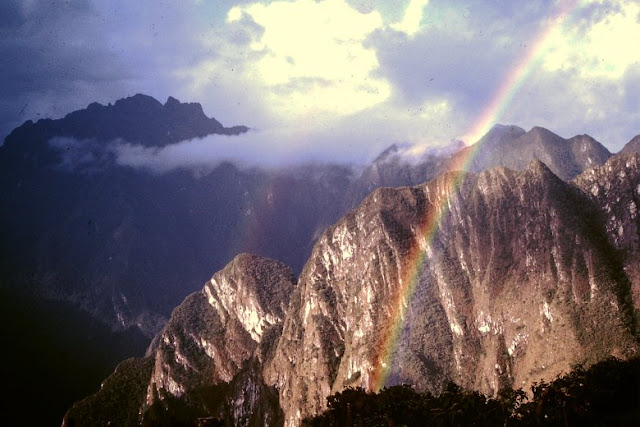 I will write about my second day at Machu Picchu... which was equally amazing... in my next post.
Posted by Retired Teacher at 11:30:00 PM